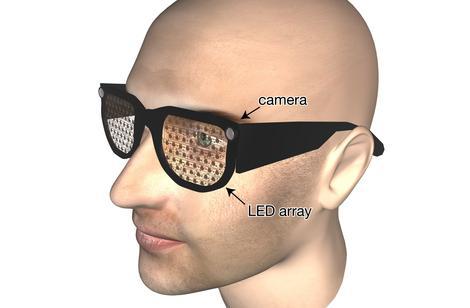 We won't lie: we love us a heartwarming story about scientists using run-of-the-mill tech to help people with disabilities, especially when the results are decidedly bionic. Today's tale centers on a team of Oxford researchers developing sensor-laden glasses capable of displaying key information to people with poor (read: nearly eroded) vision. The frames, on display at the Royal Society Summer Science Exhibition, have cameras mounted on the edges, while the lenses are studded with lights -- a setup that allows people suffering from macular degeneration and other conditions to see a simplified version of their surroundings, up close. And the best part, really, is that the glasses cull that data using garden-variety technology such as face detection, tracking software, position detectors, and depth sensors -- precisely the kind of tech you'd expect to find in handsets and gaming systems. Meanwhile, all of the processing required to recognize objects happens in a smartphone-esque computer that could easily fit inside a pocket. And while those frames won't exactly look like normal glasses, they'd still be see-through, allowing for eye contact. Team leader Stephen Hicks admits that vision-impaired people will have to get used to receiving all these flashes of information, but when they do, they might be able to assign different colors to people and objects, and read barcodes and newspaper headlines. It'll be awhile before scientists cross that bridge, though -- while the researchers estimate the glasses could one day cost £500 ($800), they're only beginning to build prototypes.
In this article: bionic, depth sensor, DepthSensor, diabetic retinopathy, DiabeticRetinopathy, face detection, FaceDetection, glasses, macular degeneration, MacularDegeneration, Oxford, research, researcher, researchers, Royal Society, Royal Society Summer Science Exhibition, RoyalSociety, RoyalSocietySummerScienceExhibition, science, scientist, scientists, Stephen Hicks, StephenHicks, tracking software, TrackingSoftware, University of Oxford, UniversityOfOxford, vision
All products recommended by Engadget are selected by our editorial team, independent of our parent company. Some of our stories include affiliate links. If you buy something through one of these links, we may earn an affiliate commission.
Share
Tweet
Share