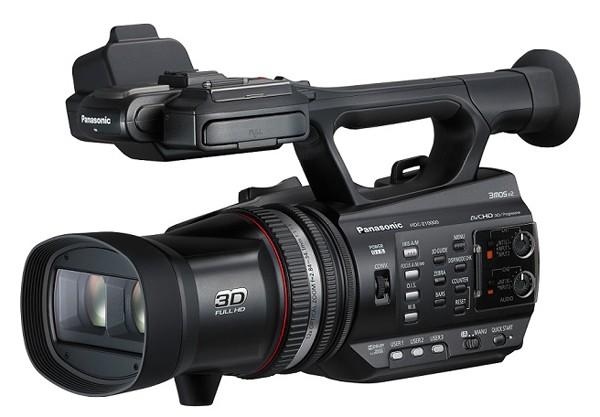 We're here in Berlin, covering IFA 2011, and Panasonic's getting things started by showing off a concept camera, its first with a twin-lens capable of shooting 3D stills and video. Alas, the company's press release is light on technical info, though it does reveal the system's built on dual 4x lenses with "thin, folded" optics. Hopefully, we'll see this thing in person while we're in town and learn a bit more. In similar news, the company also announced the HDC-Z10000 (pictured), its first 2D / 3D camcorder with an integrated twin-lens. The camcorder records 1080p / 1080i AVCHD 3D video, has dual CMOS sensors with a combined resolution of 13.1MP and a glasses-less 3.5-inch LCD. It's also capable of 3D macros as close as 17.8 inches -- a record for twin-lens 3D camcorders, according to Panasonic. As the company's been known to do, though, it's holding off on revealing any details about pricing or availability, so it looks like we'll have to save that for a rainy day. Full PR after the break.
Show full PR text

The versatility of the 3D capture technology allows users to quickly go from shooting photos and videos to viewing them. Working synergistically with other Panasonic products, the new camera allows photos and videos to be easily viewed on a VIERA 3D TV with the simple insertion of the SD memory card into the TV's SD card image viewer slot or by connecting the camera to the TV with an HDMI cable.

PANASONIC'S NEWEST CONSUMER CAMCORDER SHOOTS OUTSTANDING FULL-HD 2D AND 3D VIDEO
Panasonic HDC-Z10000 Shoots Professional-Quality 2D/3D Videos with a Twin-Lens Design that is Technically Advanced, and Also Features a 3D LCD – No Eyewear Needed
SECAUCUS, NJ (August 31, 2011) – Panasonic today announces the HDC-Z10000, its first* integrated twin-lens 2D/3D camcorder that is fully compatible with the AVCHD 3D/Progressive standard, which was also recently announced. The HDC-Z10000 builds on Panasonic's 3D innovations, having the closest 3D video macro setting with a twin-lens 3D camcorder at approximately 17.8 inches. With this industry-best macro setting, the Panasonic HDC-Z10000, helps capture 3D video that is typically difficult to do, such as flowers, animals and jewelry.

New to Panasonic's 3D-capable camcorders, the HDC-Z10000 features a 1,152,000-dot, 3.5-inch LCD that appears 3D to the naked eye – no 3D eyewear needed. By using a parallax barrier to control the direction of the light from the LCD, images with slightly different perceptions are viewed by the right and left eyes, thus creating a 3D effect. The user can check 3D images while shooting, without having to connect a monitor. Naturally, the display can also be switched between 2D and 3D.

"Adding to Panasonic's top-of-the-line 3MOS full-HD camcorders, the HDC-Z10000 naturally excels in the recording of high-quality 2D images. It also meets the constantly increasing need for full HD 3D videos, as both professionals and consumers desire more flexibility and power when shooting 3D," said Chris Rice, Senior Product Manager, Imaging, Panasonic Consumer Electronics Company. "The HDC-Z10000 is a unique camcorder in that it has high-end features to suit advanced users, but is easy enough to use for those looking for excellent 2D video and who may want to explore 3D video shooting as well."

The HDC-Z10000 features new F1.5 lenses that excel when shooting in low light conditions, and allow the user to record bright images with reduced noise. For the first time on a Panasonic camcorder, the lenses feature Nano Surface Coating, which is microstructure film with an ultra-low refractive index on the lens surface, greatly reducing the light reflection and thus reducing ghosting in order to produce crisp, clear image rendering. With a 32mm wide-angle lens, the HDC-Z10000 is extremely versatile and also has a 10x optical zoom while shooting in 3D or 12x optical zoom while shooting in 2D. When shooting in 2D, HYBRID O.I.S. helps to correct handshake that occurs when shooting while zooming or walking, in addition to horizontal, vertical, yawing, and pitching four-axis correction. When shooting in 3D, the system activates POWER O.I.S., which helps to suppress handshake, especially helpful while zooming.

The HDC-Z10000 excels both in performance and ease-of-use – thanks to extremely flexible operating options. For more advanced users seeking professional-level control, there are enhanced functions, such as three independent rings for adjusting the zoom, focus, and iris control. There are built-in microphones for recording Dolby Digital 5.1-channel surround sound/2-channel stereo, the HDC-Z10000 features two XLR audio inputs with a 48-V phantom power supply for external microphone use. Clear audio is recorded with minimal noise.

Based on the AVCHD format, which offers high compression and excellent compatibility, this new standard has been upgraded to AVCHD 3D, which uses MVC (Multiview Video Coding) to record and playback 3D images via the Frame Sequential Method, and AVCHD Progressive for progressive formats. The HDC-Z10000 also employs the 1080/60 progressive method to record twice as much image data as the 1080/60 interlace method. Fast-moving subjects, such as in sports scenes, are smoothly recorded. The progressive recording of the HDC-Z10000 fully complies with the new AVCHD Progressive standard. For those looking for control over which recording modes are available, the user can select the preferred recording mode from AVCHD 3D (1080/60i, 1080/24p, and 1080/30p**, AVCHD Progressive (1080/60p), and AVCHD (1080/24p, 1080/30p** and 1080/60i PH/HA/HE mode). Other features of the Panasonic HDC-Z10000 twin-lens 2D/3D camcorder include:
- A bright 0.45-inch Live View Finder (LVF) with high-speed responses and a 1,227,000-dot high-resolution. The superb LVF makes it easier to optimize the focus, or for use in a situation that requires no excess light from an LCD screen.
- A dual SD Memory Card slot with the option of extended recording or back-up. When two SD Memory Cards are inserted and the first card reaches full capacity, the system automatically and seamlessly switches*** to the second card. This allows extended recording without having to worry about interruptions due to a lack of card capacity. Or, during backup recording, the same data is recorded onto both cards for immediate duplicating or archiving purposes in the case of a faulty SD card
- The bundled HD Writer XE 1.0 Software lets users cut out full HD 3D and progressive images and save to a computer.
- 2D/3D Still Image Recording Any Time. The user simply presses the shutter button to record a 2D or 3D (MPO compliant) still image**** at any time. It is also possible to cut out images in all modes while shooting or playing videos. 3D and 2D still images are recorded simultaneously with 2.1-megapixel resolution.

The Panasonic HDC-Z10000 will be available in black and the pricing and availability will be announced approximately 30 days prior to shipping. For more information about Panasonic camcorders, please visit www.panasonic.com.

In this article: 3D, 3D camcorder, 3d camera, 3dCamcorder, 3dCamera, camcorder, camcorders, camera, cameras, concept, concepts, HDC-Z10000, Ifa2011, Panasonic, Panasonic HDC-Z10000, PanasonicHdc-z10000, prototype, prototypes, twin lens, twin-lens, TwinLens, Z10000
All products recommended by Engadget are selected by our editorial team, independent of our parent company. Some of our stories include affiliate links. If you buy something through one of these links, we may earn an affiliate commission.
Share
Tweet
Share