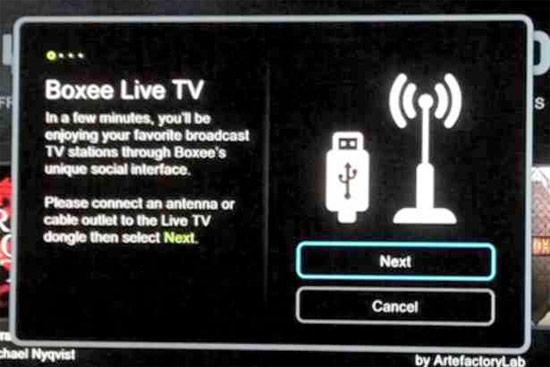 Google tried it. Countless others did, too. It's largely believed that the single reason Apple hasn't offered up a true television is the impossible nature of dealing with pay-TV providers, and in reality, trying to merge online programming and traditional cable / satellite is a chore that no one seems to be capable of completing. Based on a leaked software build (v1.5) obtained by GigaOM, Boxee is apparently toying with the idea of integrating live TV (as in, "broadcast TV stations") within the Boxee Box's interface; all you'll eventually need is a USB dongle. We're told that an EyeTV One USB TV tuner wasn't recognized -- even in the new software -- and while it was obviously nonfunctional as it stands, the verbiage is quite clear about what's in the pipeline. Unencrypted broadcast signals built neatly within Boxee's heralded, socially-adept interface? Bring it on.
In this article: boxee, boxee box, BoxeeBox, content, hdpostcross, iptv, leak, leaked, live tv, LiveTv, online tv, OnlineTv, programming, stream, streaming, streaming content, streaming tv, StreamingContent, StreamingTv, television, tv, usb
All products recommended by Engadget are selected by our editorial team, independent of our parent company. Some of our stories include affiliate links. If you buy something through one of these links, we may earn an affiliate commission.
Share
Tweet
Share