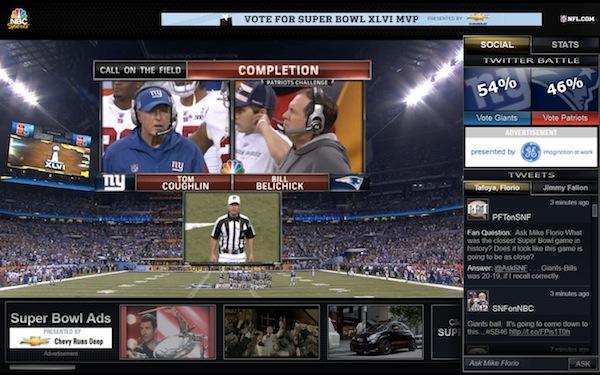 Not sure what this says about the state of streaming video online, but while the first live internet stream of the Super Bowl was watched by a record 2.1 million unique viewers, it didn't receive glowing reviews. The best indicator, though, is that the engagement for the three (plus) hour event was only 39 minutes. We think the folks over at Streaming Media got it right when they called it the Super Bowl Streaming Fail. It was bad enough that only Verizon Wireless customers could watch it on anything other than a laptop, but even those who could see it were left searching for a TV once they saw the quality. Big sports fans who might've been checking it out for the additional commentary and camera angles were also left wanting more, as the stream was plagued with lag. This meant that the other angle you were in search of was as much as a minute behind the big screen. Ultimately, we're sure everyone's glad the Super Bowl was extended to the smaller screens, but one thing sure seems true, broadcasting an event like this to millions of people is unlikely to ever be replaced by unicast internet streams.
In this article: hdpostcross, hdpostmini, internet video, InternetVideo, NBC, NFl, record, silverlight, streaming, Streaming Media, StreamingMedia, Super Bowl, super bowl xlvi, SuperBowl, SuperBowlXlvi, Verizon Wireless, VerizonWireless
All products recommended by Engadget are selected by our editorial team, independent of our parent company. Some of our stories include affiliate links. If you buy something through one of these links, we may earn an affiliate commission.
Share
Tweet
Share