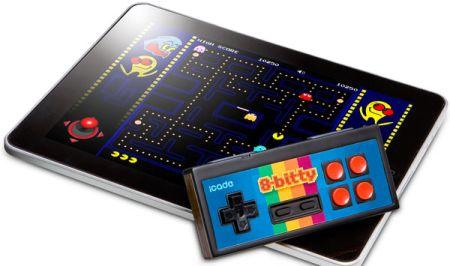 It looks like ThinkGeek and Ion Audio were holding out on us when we visited the companies' booth at CES earlier this year. (See update below) In addition to the three new devices already announced for the iCade lineup by Ion (that allows you to use various controls for iOS games across Bluetooth), there's now another one from ThinkGeek only, strangely called the 8-bitty. The 8-bitty is an NES-style (though four buttons, instead of only two) block controller that's completely wireless: Just pair it up with your iOS device and have at it.

It's hardly ergonomical, but that's not really the point with this, obviously. There are also two buttons at the top to use as triggers, so this is really an old school controller designed for new-school use. And just like all of Ion and ThinkGeek's other iCade stuff, this will be compatible with any games designed to use it -- all it does is acts as a Bluetooth keyboard, so any games designed to use certain keys to do certain things will be able to use this.

Seems like a good idea, and given iCade's success in the past, this one will probably sell just as well. It's supposed to be available "later on this year," and ThinkGeek has listed the 8-bitty at $24.99, so we'll keep a look out and let you know when you can grab one.

Update: ThinkGeek's reps email to say that while the other iCade devices are being manufactured in conjunction with Ion Audio, the 8-bitty is not. It's still using the iCade name, but this product is all ThinkGeek. Good to know.

In this article: buttons, controller, gaming, ion audio, IonAudio, iOS, iPad, iPhone, nes, tech, thinkgeek
All products recommended by Engadget are selected by our editorial team, independent of our parent company. Some of our stories include affiliate links. If you buy something through one of these links, we may earn an affiliate commission.
Share
Tweet
Share