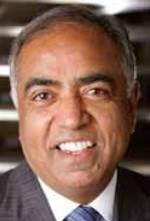 The shakeup continues at LightSquared. Just days after the would-be LTE wholesaler confirmed that it would be cutting its staff by 45 percent, it's now announced that CEO Sanjiv Ahuja has resigned from his position, although he will continue to serve as chairman of the board. Chief network officer Doug Smitand and chief financial officer Marc Montagner will serve as co-chief operating officers as the company searches for a new CEO. What's more, LightSquared has also announced that billionaire backer Philip A. Falcone has been appointed to the company's board of directors, and he himself has reiterated the company's intent to build out its wireless network, noting that it is "committed to working with the appropriate entities to find a solution to the recent regulatory issues." The company's official announcement can be found after the break.
Show full PR text
LightSquared Undertakes Search for New CEO; Affirms Intent to Build Wireless Network

RESTON, Va., Feb. 28, 2012 /PRNewswire/ -- LightSquared today announced that Sanjiv Ahuja has resigned his position as chief executive officer. He will continue to serve as chairman of the board. Doug Smith, currently chief network officer, and Marc Montagner, currently chief financial officer, will be named as interim co-chief operating officers, while the company completes the search for the new CEO. In addition, Philip A. Falcone, CEO and CIO of Harbinger Capital Partners, has been appointed to the company's board of directors. The CEO search is expected to be completed in the near future.

"Sanjiv has shown great leadership in bringing the LightSquared vision to this point, including leveraging his experience in the telecom industry to sign dozens of critical partnerships across the country," said Mr. Falcone. "As the company takes the next step forward, we continue to be excited about the prospects and look forward to working with new leadership to accomplish our goal of building and operating an innovative, competitive wireless network."

"LightSquared's objective, through its wholesale business model, is to provide increased competition and lower prices in the telecommunications industry, and to bring broadband cellular phone service to rural areas that currently don't have such service and that has not and will not change. That has been our vision from day one," said Mr. Falcone. "The absence of affordable and reliable wireless service options is frustrating for consumers, particularly in these challenging economic times."

"We are, furthermore, committed to working with the appropriate entities to find a solution to the recent regulatory issues. We, of course, agree that it is critical to ensure that national security, aviation and the GPS communities are protected. I am confident that working together, we can solve this problem and bring the American consumer the lower priced 4G wireless alternative they need and deserve," Mr. Falcone added.

Mr. Falcone noted that the company is also taking an aggressive approach to its finances to ensure that it has adequate financial runway while it works through these issues.
"During my tenure at LightSquared, we all worked tirelessly to create the nation's first open wireless broadband network and provide consumers with a new wireless broadband experience," Mr. Ahuja said. "That work continues and I wish the company and its fine management team well as they work to achieve this important goal."

As chief network officer, Mr. Smith is responsible for LightSquared's network design, deployment and operations, and is the lead architect behind developing the technical characteristics necessary to bring to market a competitive high-speed wireless network. Previously, he held a number of leadership positions at Clearwire and Sprint Nextel, managing technical, engineering and network operations.

As chief financial officer, Mr. Montagner is responsible for the company's daily financial operations and oversees investor and bondholder relations. He has nearly 25 years of experience in financial and corporate development for the wireless communications sector, including working for such companies as France Telecom, Morgan Stanley, Sprint Nextel and Banc of America Securities, the investment banking arm of Bank of America.

"Doug and Marc have been recognized leaders in the industry and bring an exceptional combination of experience, intellect and character to the management team," Mr. Falcone said. "They also know our opportunities and challenges as well as anyone, and are uniquely suited to lead the company forward. I look forward to working closely with them to bring affordable, reliable and high-speed wireless connectivity to all Americans."

About LightSquared
LightSquared's mission is to revolutionize the U.S. wireless industry. With the creation of the first-ever, wholesale-only nationwide 4G-LTE network integrated with satellite coverage, LightSquared offers people the speed, value and reliability of universal connectivity, wherever they are in the United States. As a wholesale-only operator, LightSquared will deploy an open 4G wireless broadband network to be used by existing and new service providers to sell their own devices, applications and services- at a competitive cost and without retail competition from LightSquared. The deployment and operation of LightSquared's network represent more than $14 billion of private investment over the next eight years. For more information about LightSquared, please go to www.LightSquared.com, www.facebook.com/LightSquared and www.twitter.com/ LightSquared.
In this article: 4g, 4g lte, 4gLte, ceo, lightsquared, lte, mobilepostcross, Philip A. Falcone, Philip Falcone, PhilipA.Falcone, PhilipFalcone, Sanjiv Ahuja, SanjivAhuja, shakeup, wireless network, WirelessNetwork
All products recommended by Engadget are selected by our editorial team, independent of our parent company. Some of our stories include affiliate links. If you buy something through one of these links, we may earn an affiliate commission.
Share
Tweet
Share