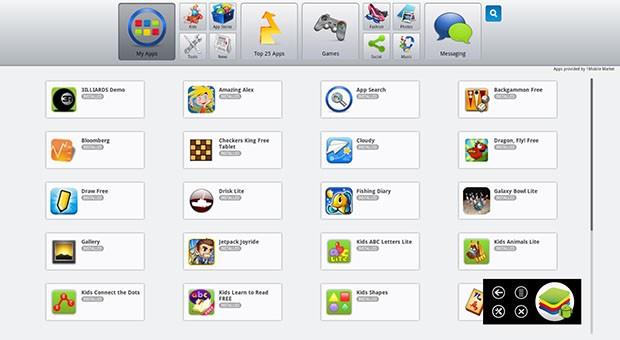 It's been a year and change since BlueStacks announced a Windows 8 version of its App Player, which let you run most of your Android apps on the then-beta OS. Now the company has announced the official version, tweaked to play nicely with Redmond's own Surface Pro and sporting a fresh, custom-built charm menu and start screen tile. You'll now be able to run apps in "true" touch-enabled full-screen mode using your Win 8 tablet's tilt/motion sensors, and everything will work faster, too. CEO Rosen Sharma also touted the release as a way for developers to bypass Microsoft's "onerous" submission process to get Android apps onto the x86 Surface Pro, and you can't argue with the price -- it's free, and available for download now. For more, head after the fold.

Campbell, CA February 12, 2013 – Mobile company BlueStacks today released a Surface Pro-optimized, officially supported Windows 8 version of its popular App Player software. The program is free to download and can run any Android app on the new Surface Pro. BlueStacks also announced a new site: GetYourAppsBack.com where new Windows 8 and Surface Pro users can download BlueStacks' software and bring any mobile apps to their device. Recently, Google launched a Get Your Google Back video campaign that BlueStacks is paying homage to.

"We've had our users asking for a Win8 version for a long time," said BlueStacks CEO Rosen Sharma. "Now that it's finally available on our website we're looking forward to getting feedback and building on the experience. The number of mobile apps being written overall is expanding exponentially and Microsoft has not added apps to the handful it has. Our goal is to get people more value out of their Surface Pro and Win8 devices."

Having announced several OEM partnerships in recent months, BlueStacks also recently passed 5 million downloads of its mobile software across Mac and PC.
The downloads all came from the company's homepage, BlueStacks.com. Additional download numbers via OEM partnerships have not been released, though the company says they are healthy. "The response in the OEM community has been as strong or stronger than the surprising numbers we've been seeing from organic downloads," said BlueStacks head of Global Sales and Strategic Alliances, Apu Kumar. "We seem to have reached a tipping point where we've brought mobile apps to so many computers worldwide, the remaining OEM's customers are asking for these apps also. We're the perfect conduit to get popular programs back on the PC."

The company's site at GetYourAppsBack.com allows new Surface Pro and Win8 PC owners to get apps from their phone and any additional apps they want into their Win8 PC, running them fullscreen and touch-enabled. The site went live today.

BlueStacks was launched in 2009 to bring the energy of the mobile app world to every type of device. The company is funded with 15M from Andreessen-Horowitz, Radar Partners, Redpoint, Ignition Partners and Qualcomm. BlueStacks was the upset winner of "Best Software at CES 2012 for its App Player software. Join their more than 1 million Facebook fans at Facebook.com/BlueStacksinc, or on Twitter at @BlueStacksinc

In this article: AppPlayer, Apps, Bluestacks, SurfacePro, video, Windows8
All products recommended by Engadget are selected by our editorial team, independent of our parent company. Some of our stories include affiliate links. If you buy something through one of these links, we may earn an affiliate commission.