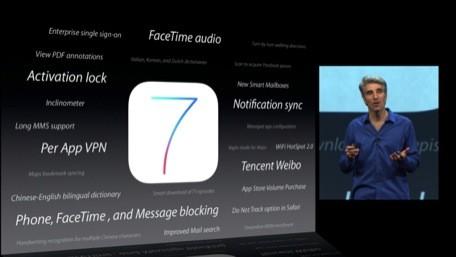 Apple on Monday took the wraps off of iOS 7, its highly anticipated next-gen mobile OS for the iPhone, iPod touch and iPad.

Apple said that iOS 7 will be available as a free download this fall and will run on the following devices:

So with iOS 7, Apple is phasing out the iPhone 3GS. The original iPad was phased out with iOS 6 (thanks, Ben!) I'd be surprised, though, if there are a significant percentage of iOS users using the aforementioned device. All in all, Apple does do a decent job of keeping iOS users running years-old hardware in the mix.

Aside from which devices will run iOS 7, it's equally important to consider which features from iOS 7 will run on which device.

To that end, here's how some of the device-specific iOS 7 features break down.

Panorama -- The photo feature Apple introduced last year will be available on the iPhone 4S, iPhone 5, and fifth-gen iPod touch. iPad users are out of luck here.

Filters in Camera - This Instagram-inspired feature will only be available for the iPhone 5 and the fifth-generation iPod touch.

AirDrop - AirDrop in iOS 7 will only work on the iPhone 5, the fourth-generation iPad, the iPad mini and the iPod touch.

Siri - Siri in iOS 7 has new voices, a new interface and a whole lot more functionality. Users trying to take advantage of the latest and greatest from Siri can run it on the iPhone 4S and above, the iPad with Retina display, the iPad mini and the fifth-generation iPod touch.

In this article: AirDrop, ios 7, Ios7, iPhone, iPhone 3GS, iPhone 4, iPhone 4S, iPhone 5, Iphone3gs, Iphone4, Iphone4s, Iphone5, itunes radio, ItunesRadio, SIRI, Wwdc2013
All products recommended by Engadget are selected by our editorial team, independent of our parent company. Some of our stories include affiliate links. If you buy something through one of these links, we may earn an affiliate commission.
Share
Tweet
Share