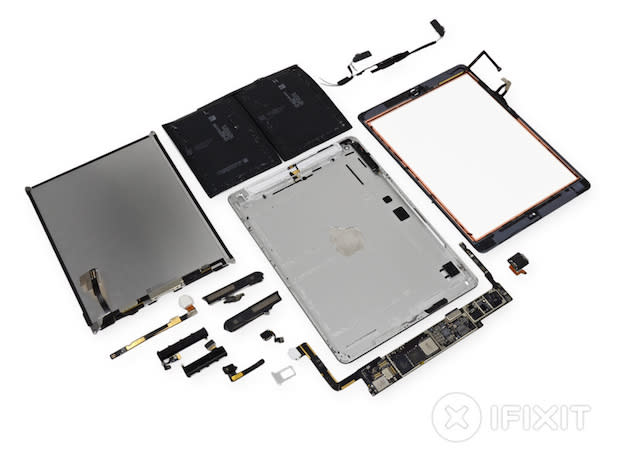 Apple's new lighter and thinner full-sized iPad has only just embarked on its world tour and already the intrepid teardown specialists at iFixit have had the thing in pieces. So, what's the verdict? Like its older sibling, the iPad mini, the iPad Air didn't perform too well on the repairability scale, scoring two out of 10. To be fair, Apple has ensured that the LCD and front glass are separate components, aiding any future replacements, with LG supplying a thinner display for this particular model. However, while the two-cell battery isn't soldered tight, iFixit maintains that the liberal application of adhesive makes it one of its most "difficult battery removal procedures to date." With a combination of glue and sticky tape hindering access to the Air's internals, Apple ensures at-home repairs are less than ideal, but that won't affect your decision to purchase one, right?

In this article: apple, ifixit, ipad, ipad air, IpadAir, slate, tablet, teardown
All products recommended by Engadget are selected by our editorial team, independent of our parent company. Some of our stories include affiliate links. If you buy something through one of these links, we may earn an affiliate commission.