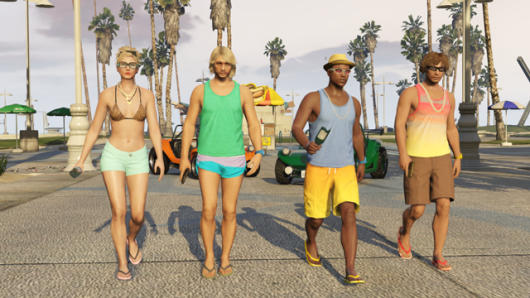 Grand Theft Auto 5 receives the free Beach Bum update for GTA Online today, and like a beach bum it's already getting comfy on Xbox 360 and PS3. The update's beached on the Xbox Games Store right now, while the PS3 version is accessible through a new title update that has started rolling out on both consoles, according to Rockstar.

Beach Bum brings new vehicles in the form of dune buggies, camper vans, and off-road trucks, while new jobs include beach-based Races, Parachutes, Last Team Standings, Deathmatches, Survivals, and Gang Attacks. The update also brings new weapons with it and some more character customization options, allowing avant-garde citizens to mix up neon surfer ware with tribal tattoos - just go wild, man.
In this article: 2K-Games, beach-bum, grand-theft-auto-5, gta5, microsoft, playstation, ps3, rockstar, Take-Two, xbox
All products recommended by Engadget are selected by our editorial team, independent of our parent company. Some of our stories include affiliate links. If you buy something through one of these links, we may earn an affiliate commission.