Amazon's in-garage delivery is now available in over 4,000 US cities 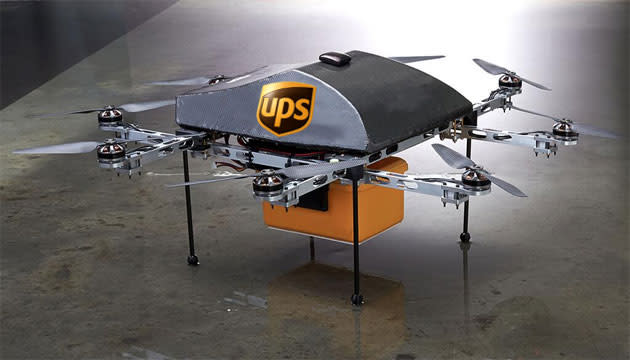 When Jeff Bezos went on 60 Minutes and mentioned that Amazon was experimenting with delivery drones, we knew it was only a matter of time before other companies revealed similar plans. And, one day later, sources at UPS have told The Verge that the delivery giant has its own unmanned flying couriers in the lab. Publicly, the company is largely keeping silent, saying only that "the commercial use of drones is an interesting technology and we'll continue to evaluate it." But Ryan Calo, a law professor specializing in drones, isn't afraid to speculate about what the program might look like. While he doesn't rule out Amazon's ambitious vision of an octo-copter dropping a package at your doorstep, he believes the first versions will be much more limited in scope. For example, he foresees a company like UPS using the self-piloted vehicles to move packages from airports and major cities to more remote pickup points. It wouldn't be quite as convenient as having a robot bring your family's Christmas gifts to your home, but it would certainly speed up delivery while keeping the cost in check.

It would hardly be a surprise if UPS beat other delivery firms and Amazon to the punch on this one, as it invests quite heavily in R&D. According to a spokesperson, "UPS invests more in technology than any other company in the delivery business, and we're always planning for the future." That's hardly a surprise coming from the company that already offers 3D printing services at some of its retail locations.

In this article: delivery, drone, drones, ups
All products recommended by Engadget are selected by our editorial team, independent of our parent company. Some of our stories include affiliate links. If you buy something through one of these links, we may earn an affiliate commission.