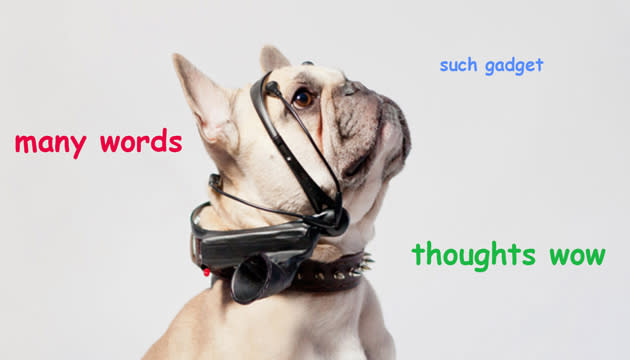 Head over to Indiegogo today and you'll find a particularly wacky (and risky) project bidding for your investment. It's a device that goes by the name of No More Woof, which admittedly sounds like it does horrible things to dogs' vocal cords, but which actually promises something very different. It's a canine-sized headset that consists of EEG recorders connected to a small Raspberry Pi computer and a loudspeaker, supposedly allowing "ionic current flows" in a dog's brain to be translated into human speech. A $65 model is said to distinguish between three different thoughts, including tiredness and curiosity, while more expensive options will have more sensors and more powerful software.

The only hold-up (and it's a big one) is that this project is being offered for crowdfunding while still at the concept stage, and all investment will be kept even if the funding target isn't met. According to a disclaimer on the Indiegogo page:

"Yes, we HAVE achieved some results, but we are very far from a mass-producable product. That said, we believe that within a few years the technologies we are working with will revolutionize our relation to pets and animals."

Indeed, there's no evidence that ST, the Scandinavian research lab behind No More Woof and last year's equally strange iRock rocking chair, has managed to come up with anything like a working prototype -- or at least there's no sign of one in the long-but-vacant video embedded below. Nevertheless, if dog barks are eventually mistranslated by this sort of "novelty science" (a word ST actually uses to describe its own research), who'll be any the wiser?

In this article: culture, dog, gadgetry, gadgets, gear, indiegogo, nomorewoof, nordicsociety, st, thought, timeline16pettech, translation, video, wearables
All products recommended by Engadget are selected by our editorial team, independent of our parent company. Some of our stories include affiliate links. If you buy something through one of these links, we may earn an affiliate commission.