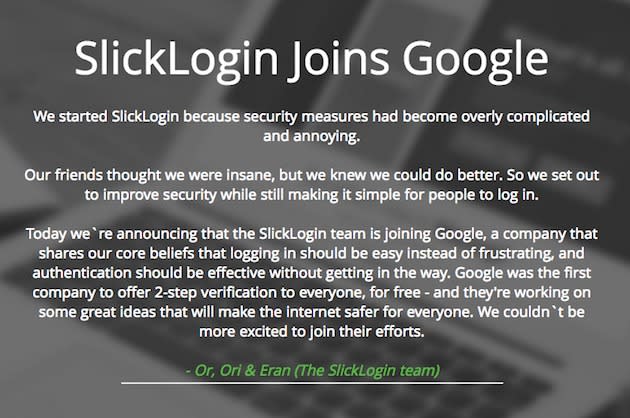 If Google's latest acquisition is anything to go by, entering a password on a website could soon be as easy as placing your smartphone near your computer. Israeli startup SlickLogin confirmed today it has become the latest company join Mountain View's ranks (although it'll work from Google's local offices), bringing its patented sound-based smartphone technology with it. While neither party has disclosed much information, Google's intentions seem clear: the company already offers its two-factor authentication tech free to everybody, but it can be a pain to enter a six-digit authentication code (which changes every minute). SlickLogin's system, however, requires no additional technology, just place your phone near your computer and inaudible sounds played through the speakers take care of the rest. The Israeli team says Google is already "working on some great ideas that will make the internet safer for everyone," except maybe from your dog, who could hear all of your future passwords.

In this article: automation, google, mobilepostcross, passwords, slicklogin, smartphone, sound
All products recommended by Engadget are selected by our editorial team, independent of our parent company. Some of our stories include affiliate links. If you buy something through one of these links, we may earn an affiliate commission.