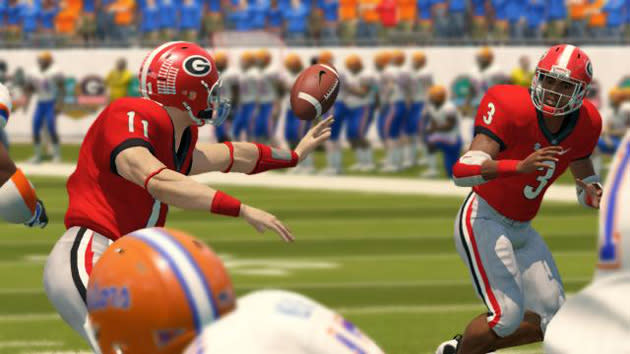 Back in September, EA Sports announced that it would shutter its NCAA Football series after losing support from the college sports governing body and due to ongoing legal spats. As part of that news, the video game studio said that it had settled its case with those suing over the use of their likeness in its releases. During the course of the last week, though, a federal district court judge ordered documents be made public in the Ed O'Bannon player-likeness suit. So why does that matter? Well, as it turns out, EA sought use of player names and faces "just as they are shown on TV broadcasts", and a document shows that the NCAA knew "hidden" rosters were being used back in 2007. This news comes after an EA Sports exec said last year that the NCAA gave it the official OK to match up real names and with virtual jersey numbers -- directly identifying actual players. And as AL.com reported, the NCAA is suing EA Sports for not protecting it during the aforementioned settlement proceedings.

What's more, in exchange for the ability to pack its games with player likenesses, EA agreed to sprinkle in "academic-related features." That's why "academic prestige" is part of the recruiting pitch options in Dynasty mode and explains the inclusion of player suspensions in previous releases. You know, the whole "violation of team rules" type thing? The O'Bannon lawsuit is still in progress, so it could be quite a while before we find out just how much those player likenesses were really worth.

In this article: ea, easports, electronicarts, gaming, ncaa, ncaafootball14
All products recommended by Engadget are selected by our editorial team, independent of our parent company. Some of our stories include affiliate links. If you buy something through one of these links, we may earn an affiliate commission.