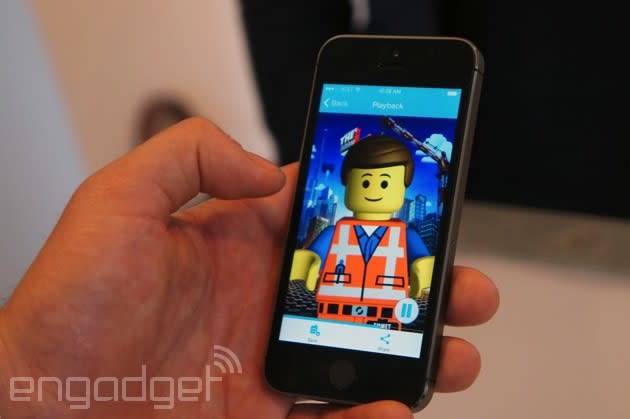 We typically think of Intel as a hardware company, a chip-making giant that helps build wearables, cable-free laptops, smart baby onesies. Today, though, the company is showing off software for a change. The chip maker just unveiled Pocket Avatars, a mobile messaging app that lets you send video messages to friends. Actually, "video messages" doesn't really describe it. These aren't so much videos as 3D avatars that happen to speak in your voice. In particular, the app makes use of facial recognition -- a pet project of Intel's -- to mimic gestures like nodding, blinking, sticking out your tongue, and raising your eyebrows. A future version, said to be coming soon, will support more nuanced facial expressions, along with neck and shoulder movements. All told, this is a lot of real-time processing, which means the messages are going to be brief: You've got 15 seconds to say what you want to say.

The app, available today for iOS and Android, includes an avatar store of sorts, where you can download 45 avatars, either for free or 99 cents. Of the bunch, you'll find some familiar characters, including those from the Lego series, Gumby, Care Bear and The Jim Henson Company (gotta give Intel credit for being thorough in its avatar-making deals, we suppose). In addition to sending to folks in your contact list, you can also post your clips to the usual services -- Facebook, Twitter, et cetera. That doesn't mean you should (we might unfollow you), but hey, at least it sounds less annoying than Slingshot.

In this article: gumby, intel, JimHensonCompany, lego, messaging app, MessagingApp, mobilepostcross, pocket avatars, pocketavatars
All products recommended by Engadget are selected by our editorial team, independent of our parent company. Some of our stories include affiliate links. If you buy something through one of these links, we may earn an affiliate commission.