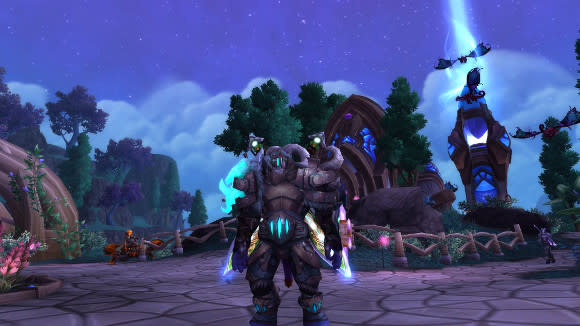 I kind of want to change gears this week. I assume if you read this column, you have a passing interest in Warcraft's lore and story. So instead of picking apart the Shadowmoon Valley or Frostfire Ridge experiences from a lore perspective (and believe me, I'll be doing that in the future) I thought we could take a look at what it feels like to play through both starting zones as a member of the race that dominates the experience. This column will be about the disconnect of playing through Tanaan and SMV as a draenei -- there will be a follow up about the experience of playing through Tanaan and Frostfire as an orc. Spoilers are likely unavoidable. So from this point on, be aware of them.

For me this is one of Warlords' big strengths as a story, the way the characters are in a place that's familiar, but not too familiar. Even if you're playing a tauren or undead in Frostfire or a gnome or dwarf in SMV, it's possible to have that feeling of almost but not quite when you go there. I think it's stronger in Shadowmoon for a variety of reasons -- it's a classic BC zone (Frostfire seems to be half of the Blade's Edge Mountains) and there are quite a few moments where you feel a sense of twisted, broken recognition - the fact that the Alliance player garrison seems to be almost right on top of where the Horde starting base in the zone was, the first time you approach Karabor and see the structure dominating the region.

But playing a draenei, it's another step into the weird. Because here are your people, and yet, they don't recognize you. Everywhere you go, you're spoken to exactly as you would be if you were a human, a night elf, or even a pandaren. At one point, a prominent draenei questgiver talks about encountering a worgen and then says straight to you that he's not used to 'you Alliance' yet.

It's disconcerting to ride about Shadowmoon Valley and have no one recognize that you're one of them - no one says 'Hey, who are you, I don't recognize you' or anything. You're just another stranger from beyond the portal, welcome in their valley not because of any kinship you share with them but entirely because you rescued several of them from the Tanaan Jungle.

I'm of mixed opinion about the effect this causes. On the one hand, I really feel like somebody should say something, like "Your name? But you died years ago!" Or, perhaps, simply you never existed on this version of Draenor and everyone is like "Who?" and is confused about what you're talking about. But I also think this disconnect is valuable. You're a draenei, yes, but this isn't your Draenor. Perhaps you never existed here, perhaps you died young, perhaps something else happened - perhaps in this world, you joined the Legion on Argus instead of joining with Velen. From an RP perspective, there's a lot to work with here. But beyond that, the zone as a whole not only reveals elements of draenei culture and history we never had before, it gives us a glimpse of draenei who aren't hardened survivors of a near total genocide - families who are only now starting to feel the pressure of the Iron Horde and the Shadowmoon Clan's efforts against them, people who are stepping up to defend their culture, heroes defying the odds. And yet, playing through it on a draenei, there's this particular moment (I won't spoil it) where the story crystallizes and you realize this isn't my Draenor, there aren't my people and here's the why of that moment.

You are playing one of those hardened survivors of a near total genocide.

A draenei going through the portal to Tanaan is at first confronted with fellow draenei locked in cages, enslaved to work for the Iron Horde, and she or he does the best that can be done for them. There's an immediate sense of not again, not ever again that is implicit in the story. But as it progresses - as you quest through the Tanaan experience and arrive in Shadowmoon Valley, things start to feel interestingly twisted. At first, you're running around helping your own forces, getting your garrison set up, but as time passes you start to feel disquieted by how normal everything is. You're smack dab in the middle of a society that died to you. You watched it die. It was in surviving its fall that you became whatever it is you are - and now, you're fighting to save it, but it won't be saved for you. Your Draenor will remain just as dead, torn apart by Ner'zhul. Your people were still killed, and their bodies use to pave the road to the Dark Portal. You still hid on a giant mushroom in a swamp that replaced an entire sea. You still watched most of your people die, and the fact that you are now standing there talking to them again doesn't change or undo that.

And it's that stark reality - you are not actually home, and you're never going to be, because home is dead and gone no matter what you do here - that gives everything this patina of elegy. On the one hand, the chance to get it all right is a strong motivator. Standing on the steps of the Temple of Karabor fighting the Iron Horde off is a great moment for anyone, but for a draenei it is a minor miracle. One of the holiest places in your people's history, whole, untainted by warlocks and the madness of Gul'dan, and you stand proudly and drive back those that would enslave and murder your people. And yet, it's also bittersweet because it doesn't change what happened. There's no bronze dragon warning you that events must play out as they did because this isn't your past, and no amount of fighting to safeguard the lives of these oh-so-familiar faces will in any way fix that. When you go back to Azeroth, the Exodar will still stand on Azuremyst Isle with all the people that were there when you left it. And all the people that never made it to that moment of escape, they won't be magically returned to you. Combined with the feel of the zone itself - the roads, the grass, the trees, that giant moon and its smaller sister perpetually above you, elekks and talbuks and wolves - it's a zone that lives, breathes and exists. And it does so because of your actions, ultimately - you save it. But you don't save it for yourself - your Shadowmoon Valley is still the dead, fel-tainted ruin, your Karabor is still the Black Temple. And so there's a quality of selflessness mixed with selfishness. You of course want to save these people because they are your people. But it won't change what happened to you. You're not going to suddenly have memories of how your people were saved, because they weren't. They're all still dead. So you're just saving other people who look like the ones you remember, in a culture that resembles the one you lost, for their good and not your own.

Of course you're also doing it to stop the Iron Horde from marching through the Dark Portal and murdering you and everyone you love. So there's that.

To paraphrase William Faulkner, the past isn't dead. It's not even past. Shadowmoon Valley on the beta gives you exactly this kind of slow creeping feeling of pain and loss, like adventuring through a haunted house. Yet it also gives you a sense of triumph, of second chances. You can't save your Draenor, but you can save this one. And its a feeling you couldn't get if not for the trip through this new Dark Portal - a story that couldn't be told without it. It's really extraordinary in places.

Next time I'll look at an orc's journey through Frostfire Ridge.

While you don't need to have played the previous Warcraft games to enjoy World of Warcraft, a little history goes a long way toward making the game a lot more fun. Dig into even more of the lore and history behind the World of Warcraft in WoW Insider's Guide to Warcraft Lore.
In this article: Draenei, draenor, featured, guide, guide-to-lore, lore, lore-guide, role-play, role-playing-guide, rp-guide, Shadowmoon-valley, world-of-warcraft-lore, wow-guide, wow-lore, wow-role-playing, wow-role-playing-guide, wow-rp, wow-rp-guide, wow-rping, You-cant-go-home-again
All products recommended by Engadget are selected by our editorial team, independent of our parent company. Some of our stories include affiliate links. If you buy something through one of these links, we may earn an affiliate commission.