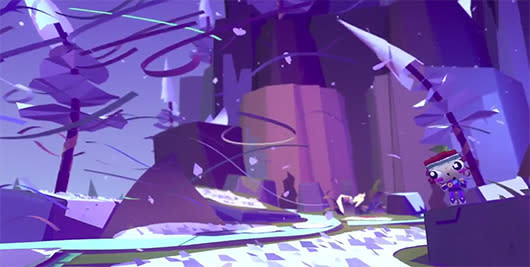 Media Molecule took the stage at Sony's Gamescom press conference to announce Tearaway Unfolded, an upgraded, enhanced version of the Vita's Tearaway slated to hit the PlayStation 4 next year.

Developing for the PlayStation 4 allowed Media Molecule to add wholly new gimmicks. One such gimmick featured a player exploring the game world by using the lightbar on his PlayStation 4 as a makeshift flashlight that can only illuminate objects in the game. Another saw a player catch an object thrown by a character in the game, only to shake it up, fling it back and destroy a building in the background.

Don't be confused by these new tricks, however. This is not a new game. Instead, Media Molecule claims that Tearaway Unfolded is the "same overall journey as the Vita, only on the big screen." Following the press conference, the PlayStation.blog posted additional information on Tearaway. Almost all of it is contained in the trailer below the break, but keep in mind that the game will run at 1080p resolution and 60 frames per second when it makes its PlayStation 4 debut.
[Image: Sony]
In this article: gamescom-2014, gamescom-2014-playstation, media-molecule, playstation, playstation-vita, ps4, sony, tearaway, vita
All products recommended by Engadget are selected by our editorial team, independent of our parent company. Some of our stories include affiliate links. If you buy something through one of these links, we may earn an affiliate commission.