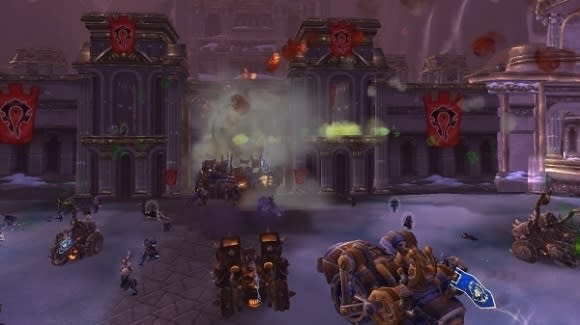 WoW Archivist is a biweekly column by WoW Insider's Scott Andrews, who explores the secrets of World of Warcraft's past. What did the game look like years ago? Who is etched into WoW's history? What secrets does the game still hold? It first appeared on our sister site on January 2nd, 2015, and is included here by permission.

Any game that survives for 10 years and counting will have its growing pains. There will be moments when the urge to deliver the best possible content gets the better of the developers, when they reach too far but only figure that out after it's too late.

Wrath of the Lich King was so ambitious in scope as originally conceived that Blizzard simply couldn't deliver what it announced. Blizzard cut major features before the expansion even went into beta testing. Wrath's systems went live with patch 3.0.2 in October 2008, and the expansion hit live realms two months later. As with most expansions, there were early problems.

In patch 3.0.8, Blizzard tried to fix those problems. Instead, it made them worse. Far worse. WoW Insider itself called the patch a "disaster."

Rebalancing the popular Wintergrasp outdoor battle was one of the patch's biggest features. Blizzard buffed vehicles and turrets to make them less fragile. The keep walls also became sturdier, while the final door received a nerf. Other adjustments and fixes went into effect.

So did a bug so catastrophic that players couldn't believe it ever found its way to a live realm.

Players looking to grind out Wintergrasp's rewards or those who simply found amusement in the situation were more than happy to continue the cycle. Others used the constant crashes as an exploit to get achievements like Higher Learning. Meanwhile, everyone trying to level in Northrend in the early weeks of the expansion encountered interruption after interruption.

On patch day, Blizzard was unable to solve the problem. It made the decision to disable Wintergrasp battles completely. This was not an elegant solution. Whichever faction had won the last battle retained control of the zone indefinitely. That faction now had "permanent" access to the Vault of Archavon raid, while the other was locked out.

Lagged out, locked out

Instance lag is one of those issues that seems to plague the early days of every expansion. Wrath after launch had some severe instance lag, especially in Naxxramas (as well as a laggy outdoor experience caused by those Wintergrasp battles). The lag caused frequent disconnects and frustrating encounter wipes. Blizzard said that patch 3.0.8 would include "optimization" for Naxxramas to reduce lag. But the patch only seemed to make the lag worse.

The other major problem with raids was caused by the new lockout system. You've seen the helpful popup window that informs you which bosses have been killed in the instance and whether or not you want to be saved to that version. That didn't exist in early 2009. If you zoned in, you were instantly saved no matter what. If someone had cleared an instance for the day or week and you zoned into their version, the trash was present, but not the bosses. You spent time clearing to the first boss only to discover that the boss wasn't there. You were saved to an empty instance.
For a heroic dungeon, it was annoying, but it wasn't the end of the world. The dungeon would reset the following day. For a huge zone like Naxxramas with 15 bosses, however, such a turn of events cost you a lot of opportunities at loot. You couldn't run Naxx for that entire week.

Players who caught on to this phenomenon could grief people by creating PUG runs to an empty zone -- and some very malicious people did so. Players were hoping that patch 3.0.8 would institute a fix, but as with many of our hopes for this patch, we were disappointed.

The Scourge has no openings at this time

Until recently, Death Knights were the only class that had to be "unlocked." The decision was a bit controversial, but Blizzard eased players' concerns by saying that you could create a Death Knight on any realm as long as you had a level 55 character on one realm to unlock the class. In other words, DKs would be account wide (with the exception of creating one on the opposite faction of a PvP realm).

When Wrath launched, however, this wasn't true. You could create a DK only on the same realms where you had level 55+ characters. Many players were naturally upset by this limitation, since it could put them weeks behind their friends in terms of leveling -- and they were already going to be behind by starting at 55 instead of 70. Players called it a "broken promise," but the issue was technical, not philosophical.

Patch 3.0.8 was supposed to fix this issue. The very first note of the patch was "Players may now create death knights on any realm once they reach level 55." But it didn't fix the problem for everyone. Some players were able to get around the realm restrictions, and some weren't, with no apparent rhyme or reason to who obtained the privilege. When no one was able to make a DK on another realm, it was annoying. When some could and some couldn't, it was infuriating to those left in the cold.

More bugs plagued the patch. Mail went missing from mailboxes. Hunter aspects were now supposed to be off the global cooldown, but switching aspects triggered a 1.5 second GCD. Meanwhile, the Death Knight spell Howling Blast was supposed to have no cooldown, but it still had a 5-second one.

Before the patch went live, Blizzard actually announced several bugs that would be introduced. It had to implement a two-minute cooldown on the warlock spell Ritual of Summoning. An unidentified exploit necessitated the cooldown (which has become permanent). CM Eyonix also posted that female human animations for shooting and two-handed weapons were broken and would remain that way for the near future.

Other bugs that players were hoping the patch would fix remained in the game. The most severe of these was the Hunter pet autocast bug. Pet abilities on the pet bar can be set to cast automatically whenever your pet is able to do so, or they can be switched off so the pet will never cast them unless you trigger the ability. Wrath implemented many new pet skills, including those from the brand-new pet talent trees. Hunters suddenly had a lot of pet abilities to manage, and autocasting was the best solution for most -- especially for critical ones like Heart of the Phoenix. The bug randomly switched autocast abilities to manual abilities and manual abilities to autocast. Players had theories about what caused the switch: switching zones, logging out, sending your pet to attack. But nothing seemed to fit a predictable pattern. In the meantime, hunter pets were doing whatever they felt like. For an ability like Call of the Wild, which you wanted to engage at the right time, the bug was crippling to your DPS. A channeled ability like Lick Your Wounds could be completely wasted when it bugged to autocast.
The worst problem by far, though, was Cower. Cower was redesigned late in Wrath, but early in the expansion, it was an ability with no cooldown that reduced your pet's threat. When Cower switched over to autocast, the pet could no longer hold aggro -- a huge hassle when solo questing. Also, since Cower was spammable, the pet was now wasting energy on not holding aggro instead of using any number of DPS or utility spells. WoW Insider's Daniel Whitcomb wrote a column about the bug and even provided a macro to help Hunters manage it.

Combined with the aspect GCD bug and the stampede of Hunter nerfs that went live in this patch, many Hunters were in Aspect of the Frown. They wanted a fix for the autocast bug to balance out the hard-hitting nerfs, but 3.0.8 did not yet address it. They had to resort to micro-managing their pets.

With all of these issues, you're probably wondering whether patch 3.0.8 provided anything useful at all. In fact, the patch carried out a comprehensive overhaul to one of the most fundamental systems in the game: dying and being dead.

Blizzard added more than 60 new graveyards to Kalimdor and Eastern Kingdoms. The "old world" sorely needed them, since many zones had only one or two graveyards. Depending on where you died, a graveyard run could take several minutes, and many were positioned very far from dungeons.

The most notorious example was probably the graveyard in Searing Gorge -- the one you ran back from if you died in Blackrock Depths, Blackrock Spire, Molten Core, or Blackwing Lair (basically most of classic's early endgame). It was a long hike from the graveyard to the mountain's entrance, and then once you were inside you had to navigate to the proper dungeon or raid portal. Both inside and outside the mountain, you could fall off a cliff or into a hole and make your run take way longer.

Blizzard also buffed players' run speed while in the spirit world. Dying was a much less painful punishment after the patch. Patch 3.0.8 also lifted racial restrictions on mounts. Prior to the patch, only Blood Elves could ride hawkstriders, for example. Now you could ride the mounts of any race within your faction.

Another notable change made it easier to grind old reputations. Previously, mobs would no longer award full rep if they became trivial (gray) to your character. This made leveling reputations like the Timbermaw all but impossible. The patch removed the reduction in rep based on level.

Blizzard also provided a temporary -- and very odd -- fix for feral Druid itemization in the form of an invisible "feral attack power" stat. Before the change, certain weapons had feral attack power as a baseline stat. These weapons couldn't be used by other classes (effectively) and other weapons were not as effective for feral Druids. The new stat made physical DPS weapons useful for ferals without making them useless for everyone else. Only feral Druids could see it. The topic of feral itemization could probably take up an entire Archivist feature, however, so I won't go into the nitty gritty here.

Of course, many other fixes and improvements went live successfully, including this very important quality-of-life change: How did things go so wrong? In the "disaster" article, WoW Insider listed a number of problems that could have brought Blizzard to this point: pressure from the community for fixes, the huge number of new subscriptions prompting Blizzard to rush, a lack of player participation on the PTR since it had no new content to test, and -- perhaps -- uncharacteristically poor QA.

Most of the patch's problems lasted only a few days. Over the next days and weeks, rolling restarts implemented bug fixes and other changes to smooth out the user experience. But the event is notable, since we haven't really had a patch since that went this woefully awry. Blizzard learned many lessons from the Wrath expansion that have made WoW a better game.

WoW Archivist is a column by WoW Insider's Scott Andrews; it runs on Massively by permission. Every other weekend, Scott explores the secrets of World of Warcraft's past. What did the game look like years ago? Who is etched into WoW's history? What secrets does the game still hold?
In this article: activision, blizzard, blizzard-entertainment, disaster-patch, scott-andrews, warcraft, world-of-warcraft, wotlk, wow, wow-archivist, wow-insider, wrath, Wrath-of-the-Lich-King
All products recommended by Engadget are selected by our editorial team, independent of our parent company. Some of our stories include affiliate links. If you buy something through one of these links, we may earn an affiliate commission.