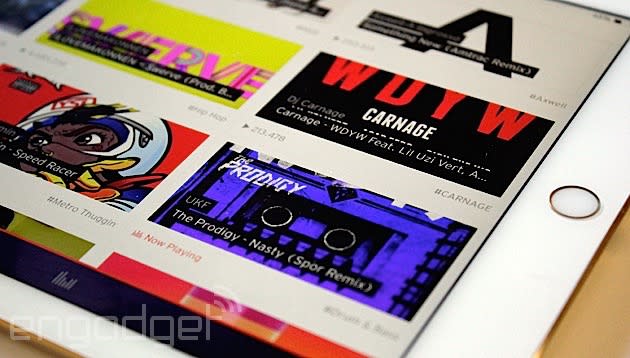 Soundcloud likes to keep its apps looking sharp -- this much we know. It was only just recently that the music service gave its iPhone app a bit of spit and polish. This time it's the iPad version's turn. Unsurprisingly, a lot of the design-DNA from the smaller iOS app carries over to the tablet version, but it comes with some functional tweaks too. The music-player's waveform isn't just simplistic, it's functional (touch to play, pause, skip etc). Also, you don't need an account to listen to tracks (you just ope, search and play) -- why don't all music apps work like that! It's not all give though: comments, track info and follower lists are all temporarily removed (they'll make a return at some point soon, we're told). As for the bigger picture, the update also proves Soundcloud is moving towards content delivery rather than enabling its creation (it's been a tool for independent musicians right from the start). How so? The removal of recording and uploading tools should fairly well make that clear.

In this article: app, ios, ipad, soundcloud
All products recommended by Engadget are selected by our editorial team, independent of our parent company. Some of our stories include affiliate links. If you buy something through one of these links, we may earn an affiliate commission.