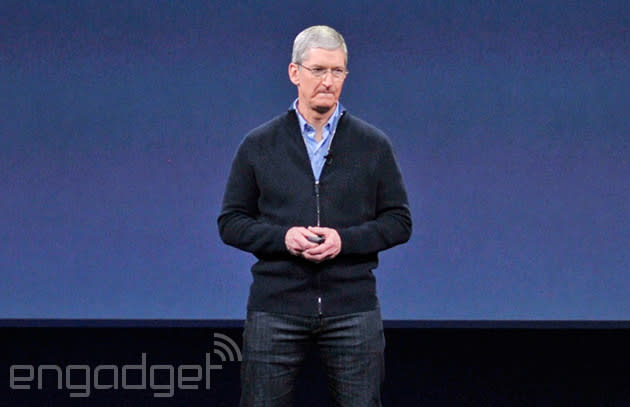 A number of tech executives have decried state laws that promote discrimination against the LGBT community by allowing companies to refuse service on religious grounds, but Apple CEO Tim Cook is taking his opposition to the next level. The executive has written an editorial for the Washington Post that says it's "dangerous" to enact these laws, which include Indiana's Religious Freedom Restoration Act and Arkansas' tentative HB1228. To him, these measures not only "rationalize injustice" against fellow human beings (including himself), but are "bad for business" -- they could stifle employment and corporate growth.

Cook stops short of taking direct action. He's not closing retail stores or otherwise scaling back operations in states where these laws exist, so this is more of a symbolic rallying cry than anything else. There's also no indication that the company will change its policies or actively organize opposition -- the article will have a much greater impact than offering a sympathetic Twitter post, but it won't put economic or political pressure on the states themselves.

However, the editorial may be a harbinger of things to come. Cities like San Francisco and Seattle have already said that they'll avoid doing business with Indiana when possible, and numerous companies (including tech outfits like Salesforce and Yelp) have either outlined similar bans or vowed to shift their growth to other states. Even trade shows and conventions like Gen Con are bowing out. It isn't far-fetched to see Apple, Google or others taking more dramatic actions in protest against laws that restrict civil liberties, such as refusing to set up data centers and offices.

In this article: apple, discrimination, gay, government, humanrights, indiana, law, lesbian, lgbt, timcook, transgender
All products recommended by Engadget are selected by our editorial team, independent of our parent company. Some of our stories include affiliate links. If you buy something through one of these links, we may earn an affiliate commission.