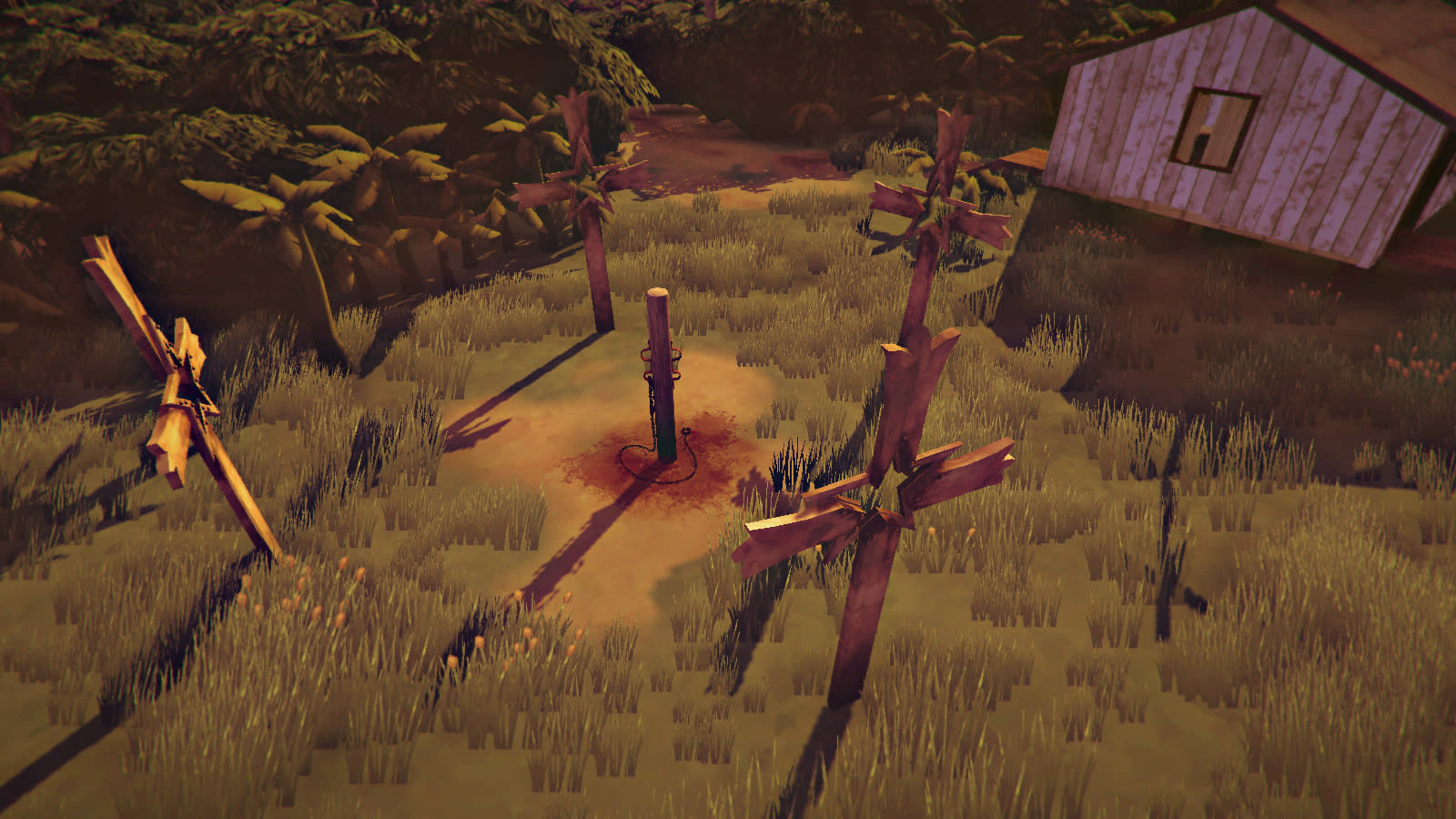 It's 1970 and you've abandoned the cruel machinery of modern society and started fresh in a South American jungle. You're surrounded by like-minded folks -- people fed up with wars, poverty, segregation and corruption -- and you all contribute in some way to the fledgling commune. It's led by two charismatic leaders with grand ideas about the future of humanity. Outsiders call it a cult.

Everything goes well, until one of your comrades is repeatedly caught stealing food from the storage unit -- a heinous crime in such a small, tightly knit community. If the commune were still a part of larger society, its leaders would throw the thief in jail. But there is no jail in the jungle, and your leaders have no plans to implement a costly prison system. What do you do with the rule-breaker? How do you make him fall in line so the entire commune doesn't come apart at the seams?

A fellow member suggests an option that would not only teach the thief a lesson, but send a message to the entire community: Chain him up and publicly beat him until the dirt runs red.

"It's not that I condone that behavior, but you could see how, in that sort of environment, there would be an ethical debate about, should we torture people? How much should we torture them?" asks Richard Rouse III, a veteran game developer who's spent a lot of time pondering questions about commune life.

Rouse isn't a fledgling cult leader, but he is intrigued by the mechanisms of alternative societies. His latest game, The Church in the Darkness, is set in a fictional South American commune called Freedom Town in the 1970s. Its leaders, Isaac and Rebecca Walker of the Collective Justice Mission, preach socialism and sustainable agricultural living in a Christian society.

On the surface, the Walkers' commune doesn't sound like a terrible place to live. It's on the fringe and extreme, to be sure, but its systems aren't inherently evil, exploitative or dangerous. At least, not at first.

Playing as Vic, a former law enforcement officer, you sneak around Freedom Town in a top-down perspective, attempting to locate your nephew, Alex, who voluntarily left the United States to join the commune. Freedom Town isn't particularly friendly to visitors, so Vic treads lightly, sticking to the shadows behind dusty, tin-roof huts and steering clear of any red-adorned elite guards. Players get to choose their play style: conduct a nonlethal, stealthy invasion or go in guns blazing.

The commune is different in every play-through. Sometimes Isaac and Rebecca are harsh, authoritarian rulers inflicting punishment on their followers for the slightest of missteps, and other times they're fun-loving, understanding leaders. Half the game is figuring out which kind of commune you're sneaking around.

Each story unfolds mainly through Isaac and Rebecca's regular updates over the camp's PA system -- and these should be infinitely entertaining, considering the couple is voiced by celebrated husband-and-wife voice actors Ellen McLain (GLaDOS in Portal) and John Patrick Lowrie (The Sniper in Team Fortress 2).

Rouse met Lowrie back when he was building the 2004 horror game, The Suffering, and Rouse thought he'd be a great fit for The Church in the Darkness -- after all, Lowrie was once a "traveling hippie musician" with friends who once belonged to communes. Though they've lent their skills to numerous titles, this is Lowrie and McLain's first gig in which they're portraying a married couple in a game, and they've been providing input from the beginning of development. On top of the announcements, the game's scenery is packed with clues about each commune's systems. Documents, sounds and landmarks shed light on Freedom Town's true purpose every time you load a new game. In one play-through, Isaac may thank his followers for constructing a basketball court (he's a huge hoops fan), and in others, he might growl through the PA system, demanding to know who destroyed his court. You may spot a wooden pole surrounded by chains and blood, or see "HELP US" spelled out with tree branches in a secret clearing -- signs that your nephew, Alex, could be in trouble.

"The game has a lot of immersive SIM-type of qualities you might find in Dishonored or something like that, but it's trying to be grounded in reality as much as possible," Rouse says.

Freedom Town takes inspiration from real-life cults, communes and fringe groups. Rouse is particularly intrigued by the Source Family, a spiritual commune that took root in the Hollywood Hills in the late 1960s. Led by James Edward Baker, known as Father Yod, the Source Family attracted more than 100 followers and valued nature, organic vegetarian diets and communal living (and copious amounts of sex, as it happens). Eventually, the group moved to Hawaii -- and that's when Baker realized how difficult it was to run a utopian society, Rouse says.

In 1975, Baker, by then a self-declared god, attempted to hang-glide with no previous experience. He crash-landed and died that day. After mourning his death, some of his commune members remained in Hawaii, while some joined other fringe groups and still more reverted to traditional lives, working at places like Goldman Sachs, Rouse says.

The Source Family was passionate, innovative and wild, but it wasn't evil.

"You hear less about those types of groups, where it's like they tried to do something just as progressive and radical, but then they pulled back before oblivion," Rouse says. "That was what interested me: How do you know which type of group and how do you interpret it?"

Another community that inspired Rouse was Rajneeshpuram, a mystical, sex-focused community that attempted to settle in Oregon in the 1980s. After arguing with locals over land, Rajneeshpuram followers ended up carrying out the largest biological warfare attack in US history: They sprayed the salad bars of local restaurants with salmonella, poisoning 750 people.

Rouse recognizes the strangeness and corruption that often seeps into communities like the Source Family and Rajneeshpuram, but he also sees their ingrained humanity. In researching communes and cults, he discovered a common thread among many former followers: They repeatedly claimed they weren't brainwashed or crazy, and they looked back fondly at their time in the communes. Their intentions were noble, even if ego and power eventually won out.

"You don't join a cult because you're a weak person," Rouse says. "You join it because you want to change the world or you have a really strong viewpoint or you can imagine the world could be better. So, you're going to join this group and see if you can make a go of it."

That's something Rouse wants to inject into The Church in the Darkness when it launches on Steam, PlayStation 4 and Xbox One early next year: humanity. Isaac and Rebecca are extreme, but they can also be compassionate and caring. Or they can be power-hungry monsters. It all depends on which story you see.

In this article: av, commune, cult, cults, gaming, ParanoidProductions, personal computing, personalcomputing, RichardRouseIII, TheChurchInTheDarkness, video
All products recommended by Engadget are selected by our editorial team, independent of our parent company. Some of our stories include affiliate links. If you buy something through one of these links, we may earn an affiliate commission.