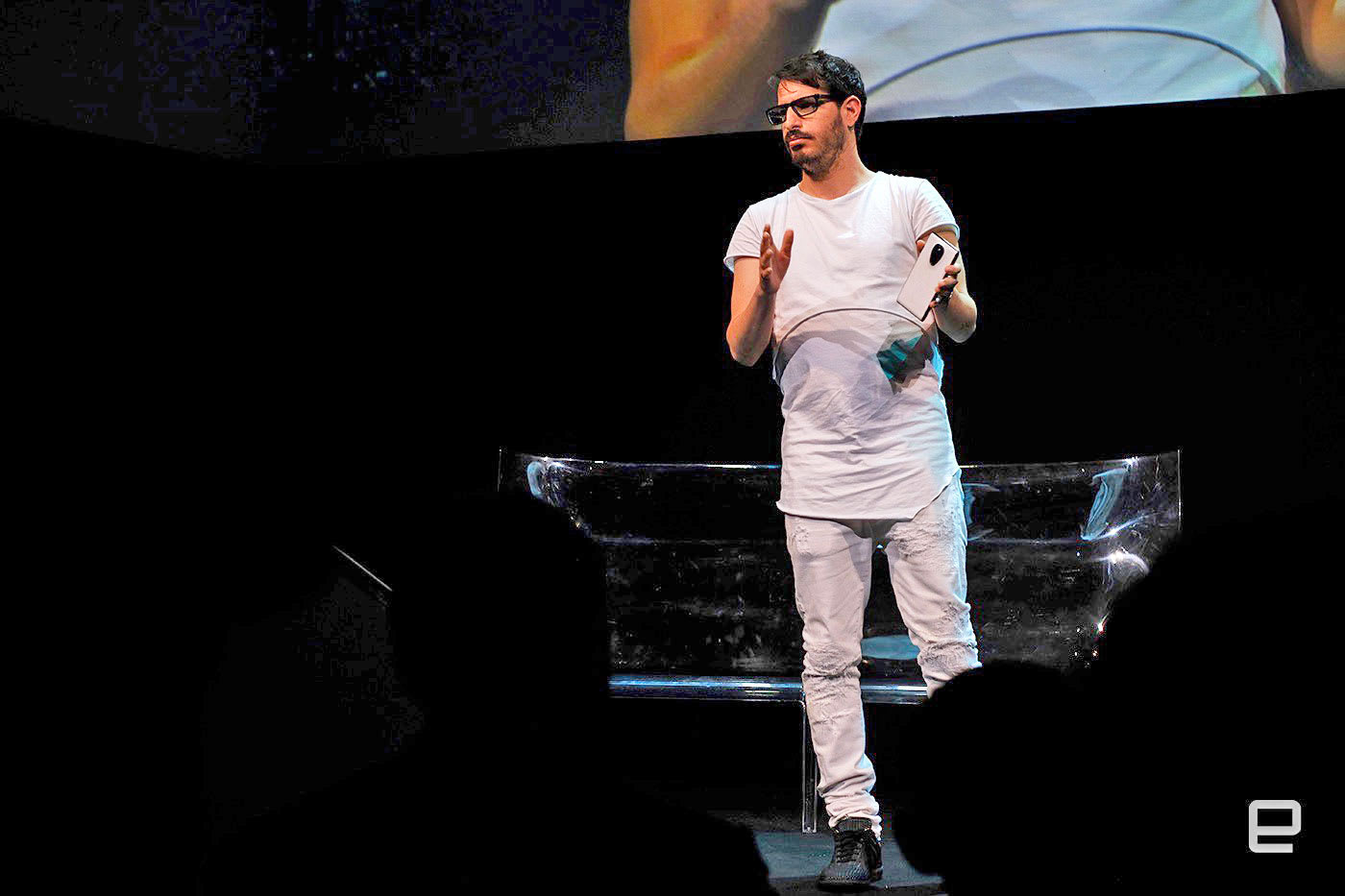 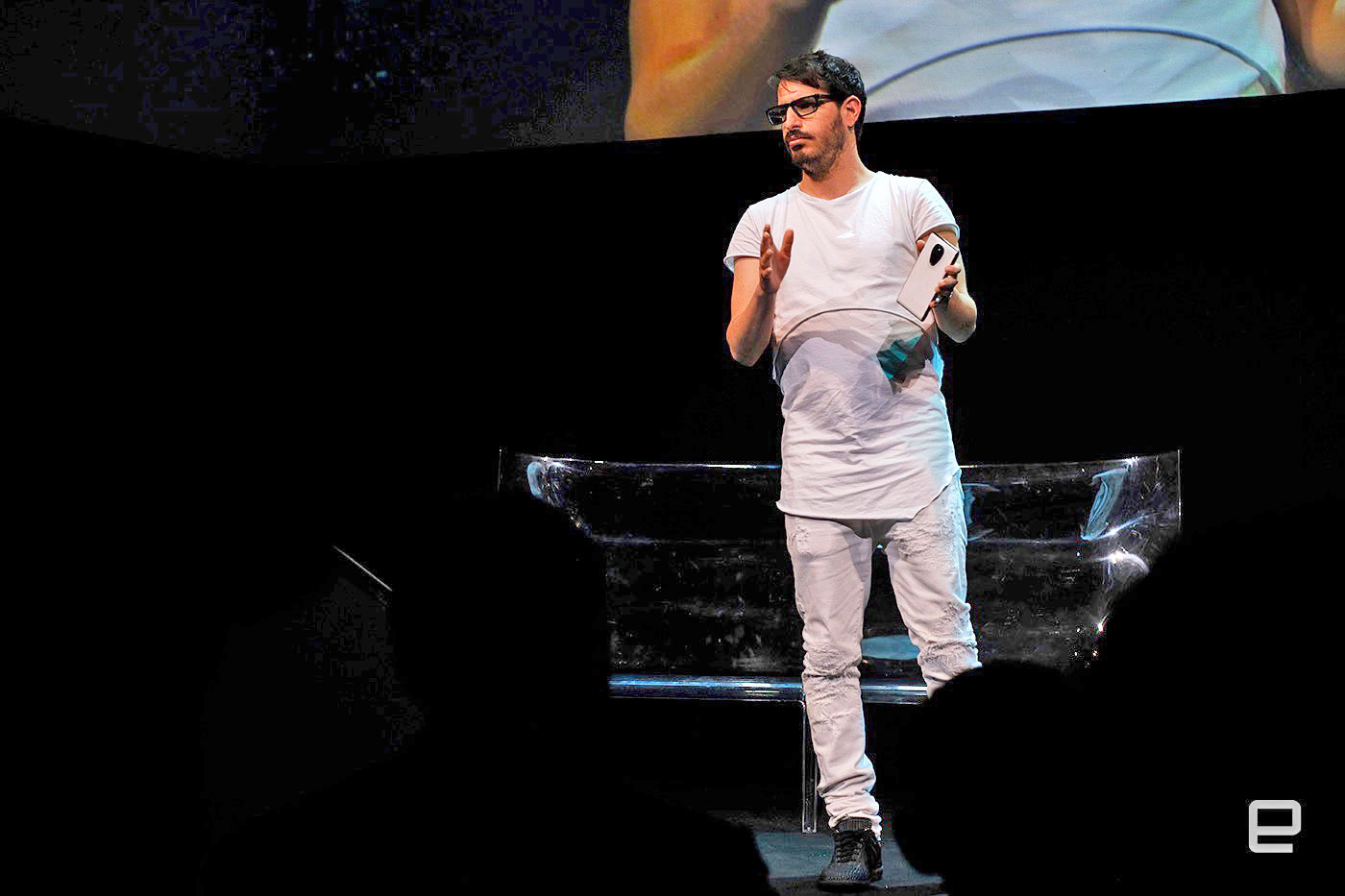 It's been a hard year to enter the mobile phone business: Profits in the Android world are nonexistent, and most of the industry's established names are struggling. HTC, LG, Sony and others have far more red ink in their mobile division's balance sheets than black, and Samsung could soon follow suit. Hell, even iPhone sales may have reached their apex. It's why the auspicious launch of Sirin Labs' premium £9,500 Solarin phone ($14,000 (plus tax), seems like such a risky move. But company co-founder Moshe Gogeg (also known as the guy behind the novelty messaging app Yo) thinks he can succeed where so many others have failed.

Solarin has a shot at being the most expensive smartphone ever made, intended for billionaires, millionaires and business executives. Hogeg hopes the phone's blend of extraordinary, futuristic technology and the promise of unprecedented security will tempt them into buying one. But despite the high price, Hogeg doesn't want the device sitting in the same luxury store glass cabinet as phones from Vertu, Porsche Design and Tag Heuer. He dismisses these devices as "bling phones" made by jewelry companies that lack any intrinsic value.

Value seems to be Hogeg's obsession, and he cites an anecdote while in a high-end technology store to illustrate his point. Pointing at one of the "bling phones," he asked the staff, "What's in this phone that justifies the price?" "Oh sir," he says in an obsequious voice, "these devices are a status symbol." In his eyes, spending thousands of dollars on a phone that's technically inferior to a Galaxy S5 that happens to be covered in diamonds is a "stupid value proposition."

So, does this make the Solarin the first smartphone designed specifically for ascetic members of the 1 percent? Perhaps, because you'll find no bling on this phone. In fact, it's been crafted to be as inconspicuous as possible. In Hogeg's mind, there are two types of rich people: demure, refined, sophisticated people who "respect value," and "people who are too excited that they have money." He's not too thrilled at the latter group buying his device, since their love of conspicuous consumption makes them "bad ambassadors" for the product. 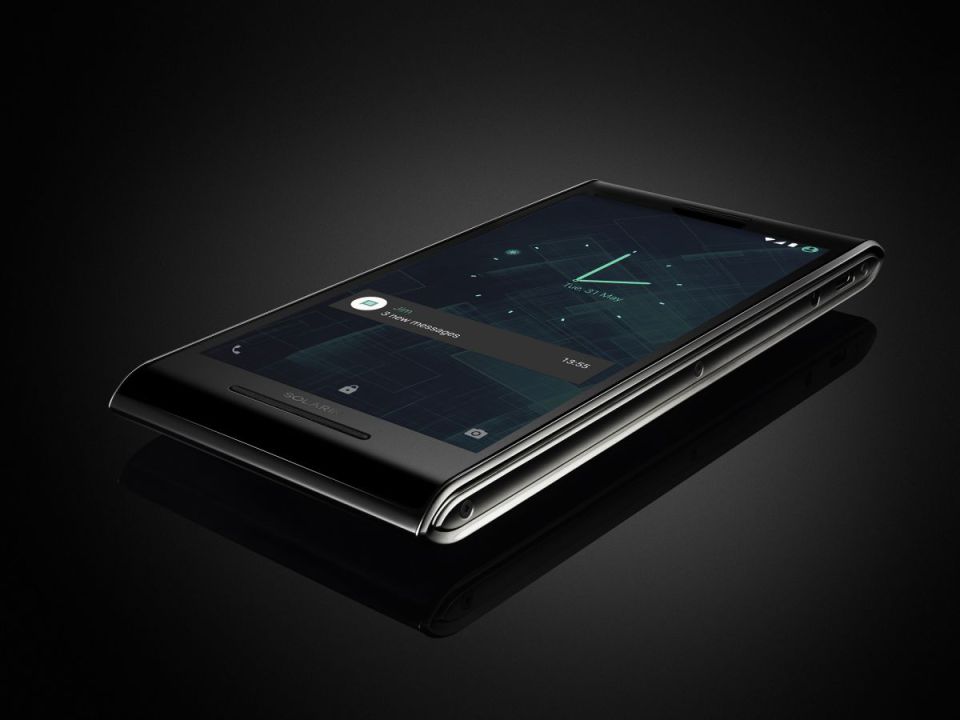 It's a product that was born in frustration while Hogeg was wandering the halls of CES 2014, the world's biggest technology trade show. As he tells it, he approached several stands to meet startups with exciting new takes on mobile hardware. He asked the ones that caught his attention if it'd be possible to buy the products on show, but they all responded in the negative. As desirable as the technology was, they weren't ready to sell because it hadn't been "commercialized." That's industry speak for this product is great, but we can't mass-produce it at anything approaching a reasonable cost.

After all, raw materials, production lines and tooling all cost money, and innovation is sometimes only within the financial reach of an Apple or Samsung. It's only these behemoths, which can produce millions of devices each year, that have the muscle to gamble on something innovative.

But Hogeg was undeterred and asked each company how much it'd cost to produce 30,000 or so. Despite the eye-watering sums that were suggested, Hogeg didn't blink, and decided he'd build a phone on the premise that money was no object.

Does this make the Solarin the world's first artisanal smartphone, sourced with only the finest materials? Maybe, although Hogeg is quick to point out that artisanal should not be thought of in the same breath as handmade. (As of this writing, he also has not clarified exactly which materials the device is made of.) Hogeg doesn't mention Vertu by name, but says offering a hand-built device is a flimsy justification for increasing the price beyond its value. Instead, Solarin is made by machines, because "machines do a better job than human beings." In fact, only two parts of the device require any human interaction at all, and the plan is that both will be gone by the second generation.

The handsets are being constructed in an old Sony Ericsson plant in Sweden, although the company's R&D lab is in Israel. But Sirin Labs is a firm incorporated and headquartered in Switzerland in order to take advantage of the country's legendary privacy laws. The sales pitch is that the Solarin will protect your data much better than a comparable device made by a company in the US. In fact, the combination of software, hardware and national laws makes him confident enough to declare that his phone is "the most secure device in the world." 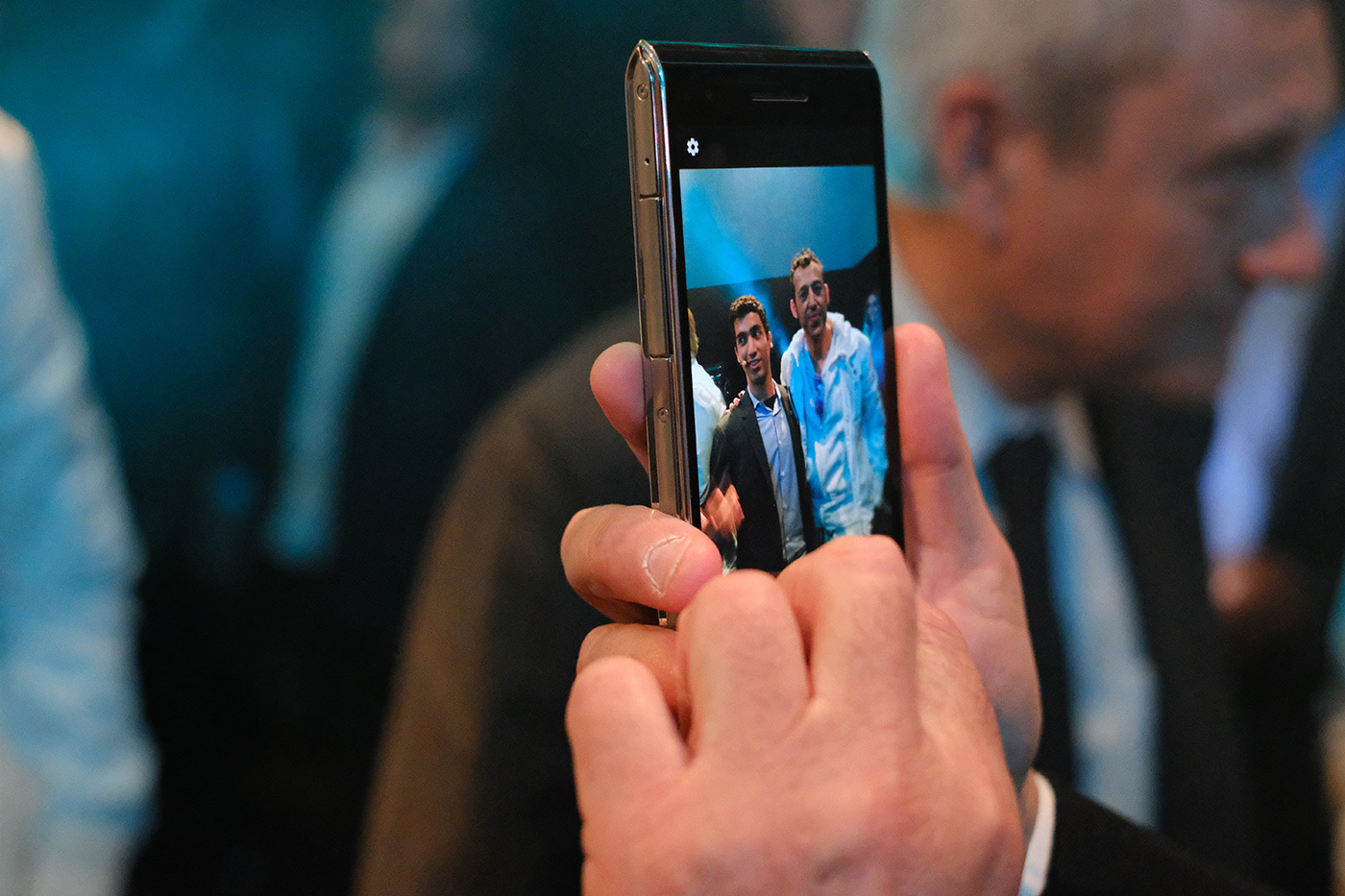 I press him on that claim, and he backs down, but only slightly. "Nothing is unbreakable," he says. "If someone has the resources, the money and the time ..." He pauses here. "I mean, people hacked the Pentagon, so who am I to say that we can't be broken?" He feels it's less about whether it's possible to open the phone and more about how difficult the company can make it to open. He believes few would be interested in attacking the Solarin given that it's been created to be difficult to crack. Not to mention that there are far easier devices to go after in other, poorer people's pockets.

However, I'm curious how confident he can be about his phone's security credentials when it's not his own operating system. Android is someone else's product, and will always be vulnerable to the errors, concessions and design decisions made by Google's engineers. There's also the fact that Solarin would be in trouble should Google bend to pressure by the US government to add a backdoor. Hogeg is confident that whatever problems Google creates, his team can fix, and that he's "never going to put backdoors in this product, period." Another thing he's very sure of is that when it comes to security, Android is on the way up compared with Apple, because it's "very easy to hack an iPhone."

The former Israeli soldier doesn't name Cellebrite, but he seems to confirm the quasi-open secret that the Israeli security company does have a way to breach iOS. In fact, he says he's seen the process with his "own eyes," and that it's as "easy as knowing your phone number." He feels that the recent kerfuffle between Apple and the government over the San Bernardino iPhone wasn't about technology, but money. "Of course they can hack the phone, but it costs them a lot of money!" he says, adding that it's more about saving "the taxpayer some money."

Hogeg jokes that the high price and target market of the Solarin mean this device is hardly going to be of much interest to any government. "We're not a phone for terrorists," he roars. "We're a phone for businesspeople, and the NSA doesn't care about businesspeople." Why, then, wouldn't a cost-conscious industrialist simply opt for Silent Circle's (much cheaper) Blackphone? "When you look at the various ways you can hack a phone," he responds, "some of these phones are very good at certain types of attacks." But according to Hogeg, only Solarin, which was developed in partnership with Silent Circle's (unnamed) competitors, is the true all-rounder.

I'm reminded of another company that marketed its devices predominantly to business types with the promise of privacy: BlackBerry. Initially, it did so with sleek, inconspicuous hardware that promised rock-solid security, albeit with a limited ecosystem. Later it tried with a premium Android handset that also bragged to the world about the combination of hardware and software that would keep your data safe. I ask him: How can Sirin Labs, with a premium Android handset that boasts added security, avoid the same pitfalls as BlackBerry? Moche Hogeg pauses, exhales and smiles. "That's a very, very good question," he says. A moment later, after he collects himself, he adds: "I don't have an answer." Another pause. "But I studied that, and I think we have a way to avoid it." Then, after another pause, he says, "We'll know soon, eh?"

In this article: culture, gadgetry, gadgets, gear, interview, Luxury, mobile, MoscheHogeg, security, Sirin, SirinLabs, Smartphone, Solarin
All products recommended by Engadget are selected by our editorial team, independent of our parent company. Some of our stories include affiliate links. If you buy something through one of these links, we may earn an affiliate commission.