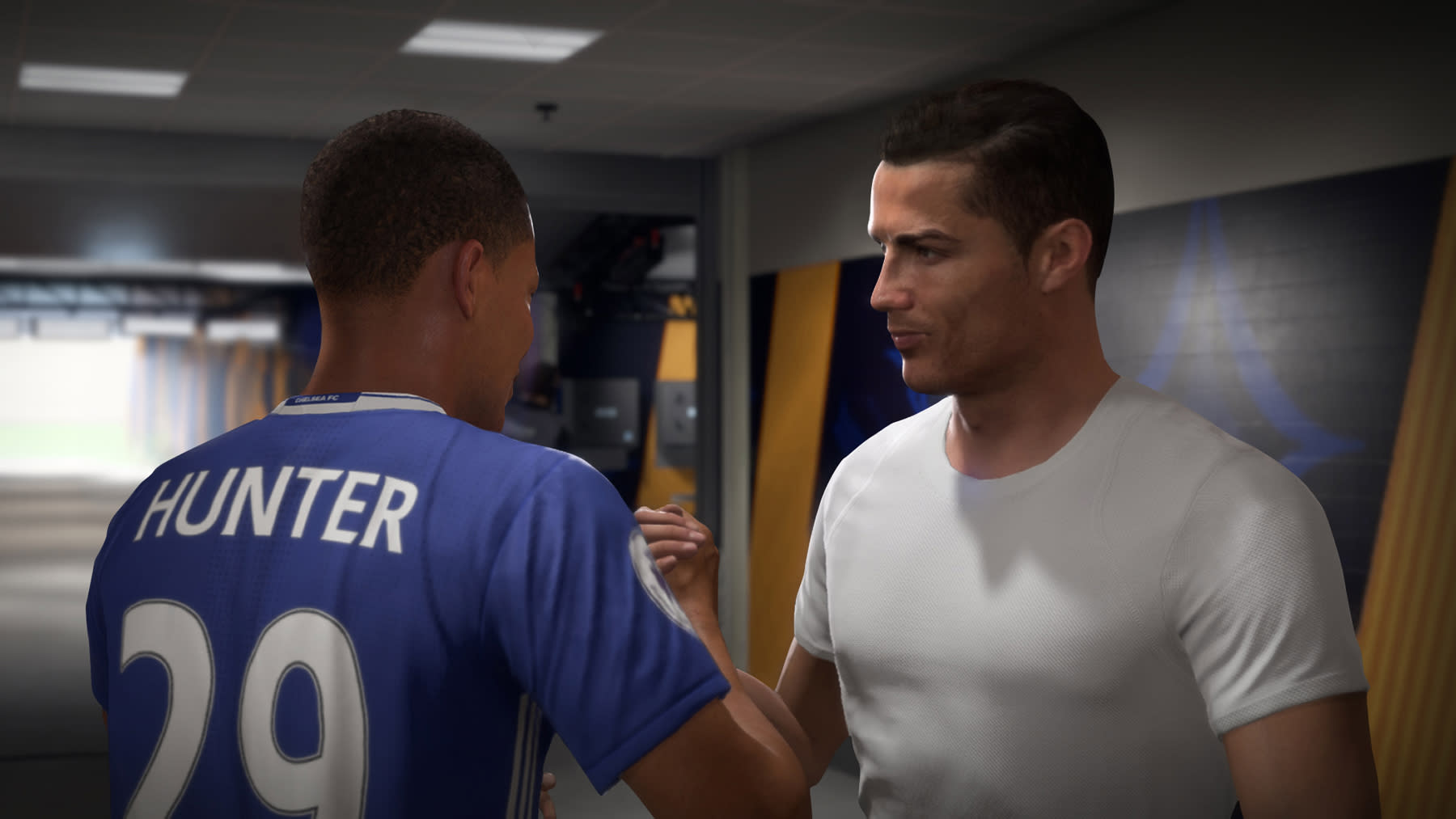 The new story mode in 'FIFA 18' is all about choice

The Journey is back, with branching storylines and player customization.

The Journey was one of the best additions to FIFA 17, crafting a dramatic but believable story around a rookie football (sorry, soccer) player in England. With FIFA 18, EA is building on the mode with a "second season" for rising star Alex Hunter. It promises a "global" story with more football clubs, branching pathways and some character customization, culminating in a campaign that should feel less scripted but no less cinematic.

At Gamescom, I was able to play a brief snippet from early in the game. Alex has spent his summer in Brazil and completed a brief preseason tour in Los Angeles before settling back down in England. The demo started in Alex's apartment with his grandfather, Jim Hunter, preparing breakfast and his mother, Catherine Hunter, working on a laptop. Soon enough Michael, Alex's agent, bursts into the room with some big news: He's been on the phone with someone representing Real Madrid and apparently, "Los Blancos" is interested in signing Hunter. Alex, unsurprisingly, is elated.

Before the deal can go through, however, Hunter needs to play a few games with his current team. In this scenario, it was Chelsea, though that could change depending on your particular playthrough. Soon enough, you're sitting in the locker room, waiting for a match with Manchester United to begin. But the coach, Butler, has bad news: The manager wants Hunter to start on the bench, fearing that his heart and thoughts are no longer with the London club. "Personally, I hope you stay, lad," Butler says with a sigh.

Deep in the second half, the manager brings you on. Chelsea are 3-0 down and the manager, Antonio Conte, expects you to achieve a rating of 8.5 for the rest of the game. The other match "bonuses," which affect how the manager sees you, include winning the game and completing 10 passes. No pressure, then. In my game, I was able to score and set up a couple of teammates, drawing the two teams level. While I managed a rating of 9.4, I didn't complete the passing objective or ultimately win the game.

Then, disaster strikes. I won't spoil what happens, but the result is that you won't, it seems, be signing for Real Madrid any time soon.

Still, it's clear that Hunter will, at some point, get the chance to move abroad. Sam Rivera, lead gameplay producer on FIFA 18, says these moments are a reflection of the game's fanbase, which stretches all over the world. Soccer is a truly global sport, so it makes sense to show the profession and fan culture from different perspectives. "For people in the UK, they probably liked The Journey last year because it was all based there," he says. "But people around the world want to see more places. And even if you're in the UK, sometimes other places are fun, right?" You won't visit every division on the planet, however. The Journey is successful because it balances wish fulfillment with authenticity. Last year, Hunter was able to play in the Premier League, but not before dropping down to a Championship side. The campaign stopped with an FA Cup Final which, while exciting, is far from the sport's apex. It's not like Hunter won the UEFA Champions League, or picked up the coveted Ballon d'Or.

"Even if you finished The Journey, you didn't play against Ronaldo, Messi, or other superstars," Rivera says. "Because that's how it goes in real life. It takes time, right?"

At least one of those players will feature in Hunter's second season, however. Cristiano Ronaldo is confirmed for the second season, alongside Atletico Madrid star Antoine Griezmann, Bayern Munich legend Thomas Muller and Tottenham Hotspur's Dele Alli. That doesn't mean you'll play for their respective clubs -- at least, it's not confirmed -- but Rivera promises they'll affect Hunter's career somehow. EA visited Ronaldo in Madrid to capture his likeness and dialogue, and while that's no guarantee of acting prowess, Rivera hopes players will be impressed by the results.

"He's a player-actor," Rivera says. "He's doing so many commercials that he probably knows how to act, right? So, having that in The Journey just makes the game richer. It's all about adding more, and we think it's a nice touch."

While last year's game had some choices, they were mostly superficial. You could choose the clubs you played for, but the core narrative was essentially the same. Gareth Walker was always your rival, and Danny Williams was your Championship team mate, regardless of which side you decided to join. In FIFA 18, however, there will be genuine branching paths. Your performances on the pitch and decisions away from the turf will influence these pivotal moments. "If you play The Journey and we meet up tomorrow, we might not have anything in common to talk about," he hints. "Because I went through a different path."

The path you take and the clubs you join will affect your immediate objectives. Rivera wouldn't give any examples, but hints that the "expectations" on Hunter will differ. At Real Madrid, hypothetically, you would be expected to win La Liga comfortably, while at Espanyol, a midtable finish would probably suffice. "At the end of the day, if you fail at the club, you might have to go on loan..." he teases. The second season of The Journey will also feature short and medium-term objectives. Last year, some people complained that there wasn't enough direction, or "goals" to complete match-to-match. Sure, there were performance targets, but the game became a slow trudge toward the end of the season and some possible silverware. The story in FIFA 18 has, therefore, been split into "chapters" with distinct milestones, or requirements, that must be completed to unlock the next one.

Hunter will also be customizable this time around. Though you can't create a character from scratch or import your previous save Mass Effect style, EA wants players to have a sense of ownership over the game's central star. You'll be able to pick his hairstyle, clothes and soccer boots, as well as whether he has facial hair or tattoos. "There are some very exotic haircuts," Rivera says. So if you want to look like Paul Pogba, with a streak of color down one side, that's totally up to you. Personally, I'm praying for a Marouane Fellaini option, if only to see how it looks in cutscenes.

Rivera is promising other surprises. You will be able to control other characters during The Journey, for instance. "A lot of things are being added," he says cryptically. Maybe they'll involve a new player?

FIFA's first attempt at a story mode was a resounding success last year. For casual fans, it was a new way to learn the game's mechanics and understand English soccer culture. A third season, while not guaranteed, seems likely. "So far, the feedback from people has been really positive," Rivera says. "And if it's a popular mode, obviously it's worth investing in. Short-term, for sure, there are plans in place." Perhaps future seasons will cover an older Hunter, or a new footballer keen to take his place. As we've seen with the Neymar transfer this summer, there are plenty of events, fictional and real, that EA could use to spice up the mode in the future.