Good options for the budget-conscious.

The iPhone X: $999. The Galaxy Note 8: $930. Even the more affordable Google Pixel 2 commands a significant investment of $650. Today's flagship phones are expensive enough that spending a significant chunk of your rent on a handset is seemingly the norm. You can opt for an installment plan to pay it off more easily, and for some people it's worth paying a service provider for two years to own one of the best devices available. But many other people can't afford, or would prefer not, to spend that much money on something they'll replace in two years (or less). Fortunately for the budget-conscious, you can find a better selection of phones for $250 than you could even a few years ago.

Before we get into the best phones at this price, let's talk expectations. First off, many of the devices we're discussing come unlocked, so it's imperative that you check to see if they'll work on your carrier before you buy one. Many unlocked handsets are only GSM-compatible, so they'll support only AT&T, T-Mobile and their subsidiaries. Sprint and Verizon customers should be especially careful when making their selections.

At this price, you're not going to get high-end features like face-recognition cameras, curved screens or high-res, edge-to-edge displays. Most of these phones use older chipsets and often run Android 6 Marshmallow instead of the newer Android 7 Nougat (which itself is no longer the latest OS).

For daily use, you won't really notice a difference in speed with these phones, but don't expect much if you're using these for heavy-duty gaming or intensive multitasking. If that's going to be a problem, you're better off getting a flagship phone on an equipment installment plan (EIP) instead.

Flagships on a budget

You can still get a premium phone for cheap if you have the time and patience to monitor deal listings. Some carriers and websites slash prices for older (but still perfectly respectable) phones in anticipation of new launches or when approaching the holiday season. If you can wait till Black Friday, you'll probably find plenty of deals bringing down the cost of usually expensive phones. In 2016, T-Mobile offered the iPhone 7, the Galaxy S7 and the LG V20 for free to people who traded in eligible smartphones, while Huawei's Honor 8 dropped that year from $400 to $300. Right now, you can even find an iPhone SE ($399 at launch) for less than $250, or the older (but still good) HTC One M8 for $160. A Google search for "iPhone SE" returns options as low as $150 at Target for an AT&T version in space gray with 16GB of storage.

If you weren't fast enough to snag one of those deals, you still have decent options. Bright, crisp screens with full HD (1080p) displays are common at this price, so don't fall for cheap phones with piddly 720p panels. Sub-$250 phones run the gamut when it comes to size, too, so you can pick from a big 5.5-inch screen down to a more compact 4.7-inch option. Many budget handsets also pack fingerprint sensors, long-lasting batteries, and dual cameras for special effects in portrait photography (although these tend to pale in comparison with iPhones and Samsung phones when it comes to quality). 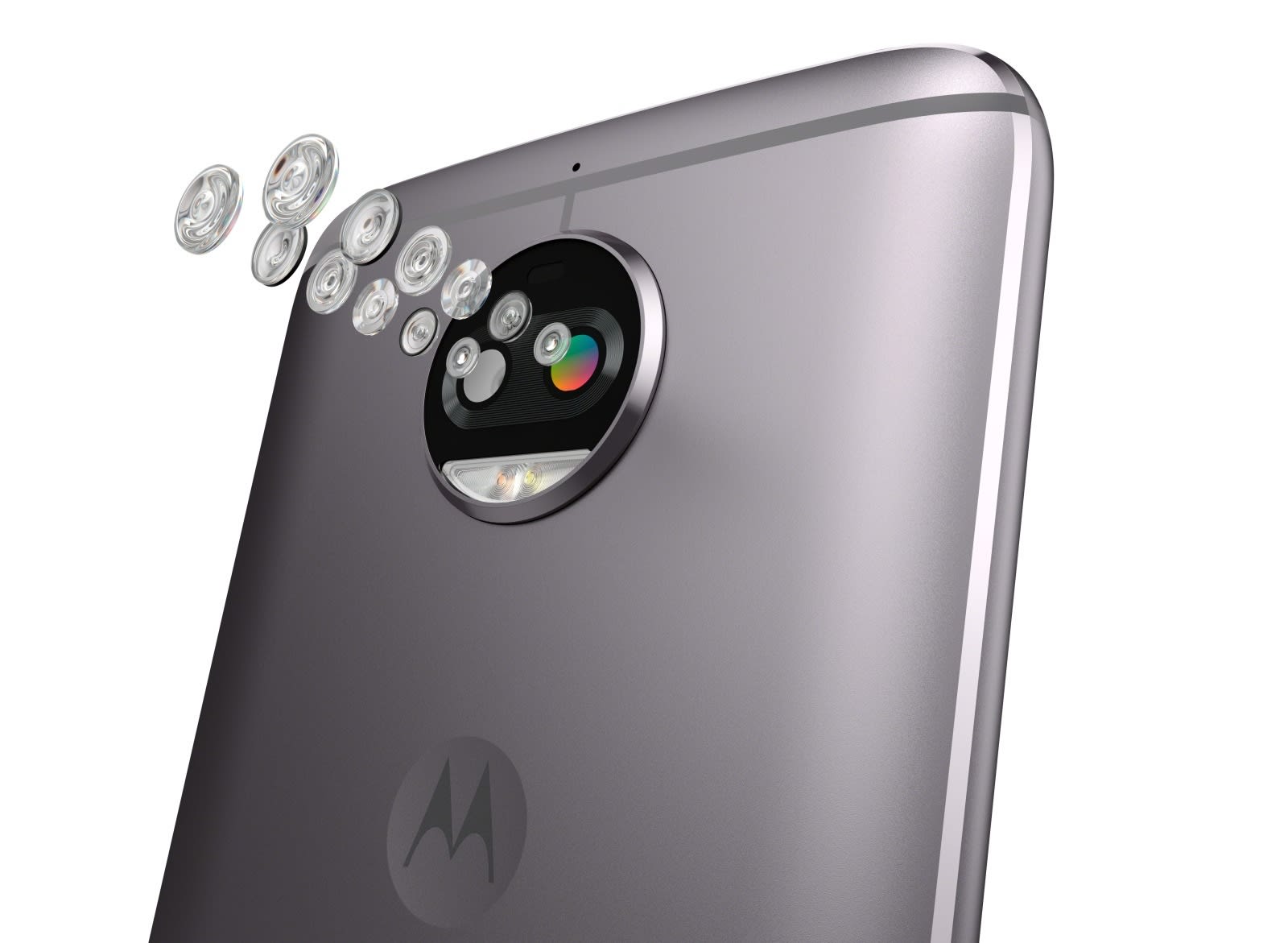 One of the best offerings is the $230 Moto G5S Plus. It's the successor to the Moto G5 Plus, which was already our favorite budget phone. The new handset features a 5.5-inch 1080p display, dual rear 13-megapixel cameras and a generous 3,000mAh battery, all wrapped in a body that feels more expensive than it actually is. The phone uses an octa-core Snapdragon 625 chip that can go up to 2.0GHz, which is powerful enough for the average person and quite good for the price. It also runs the relatively new Android 7.1 Nougat and works on all four major US carriers. The main downside is the absence of NFC support, so if you like using your phone for contactless payments, this isn't going to work for you. 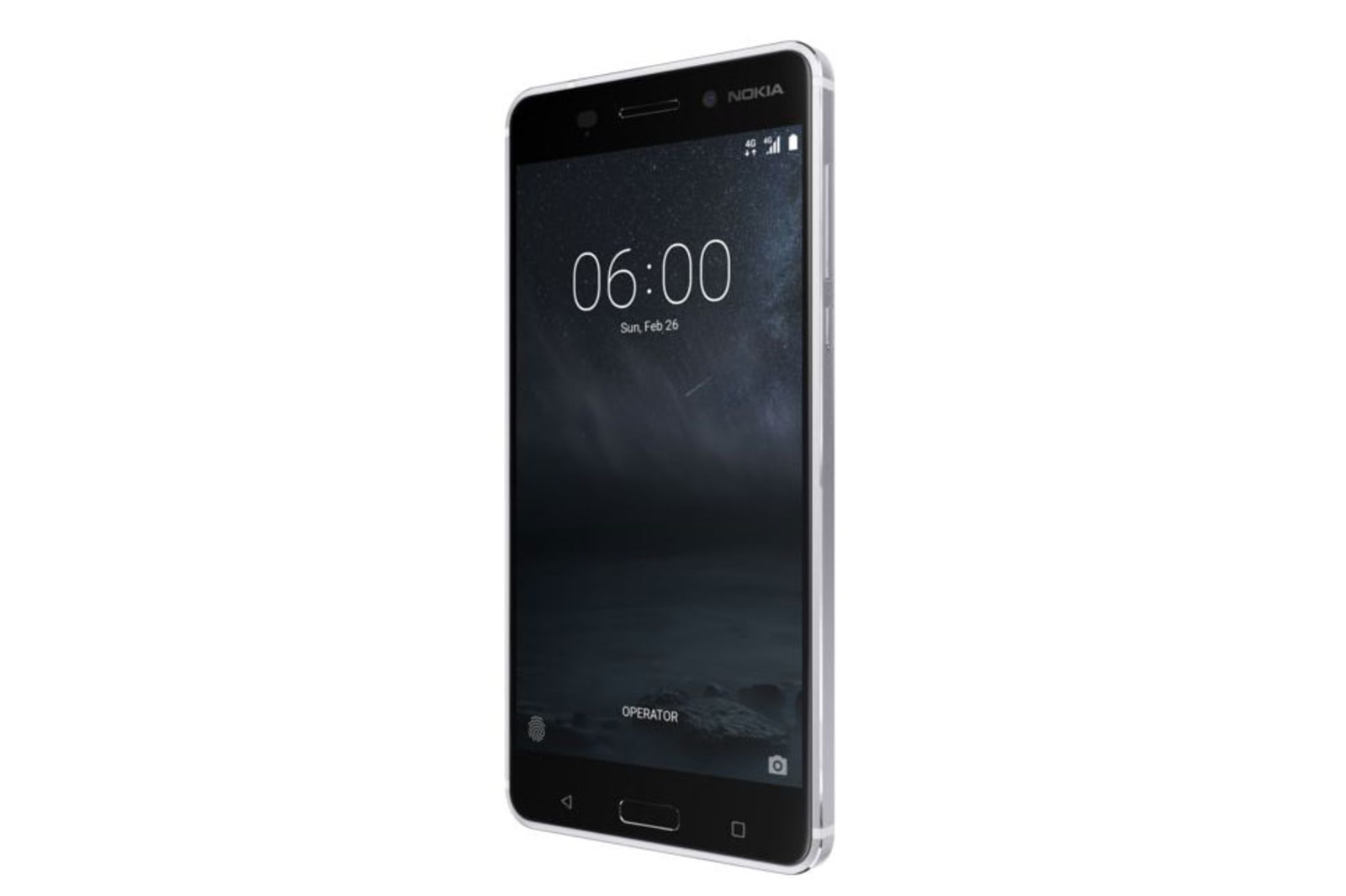 In that case, you can consider the $230 Nokia 6, which has NFC and runs the same version of Android as the G5S Plus. It features dual front-facing speakers with a "smart amplifier" and Dolby audio enhancements for louder sound. The Nokia 6 sports a single 16-megapixel camera on its rear, though, and uses a slower Snapdragon 430 processor. Also, it's unfortunately stuck in the past with its micro-USB charging port. That's a minor complaint, but when the rest of the world has already moved on to USB-C, it feels like an antiquated feature. Still, the Nokia 6 offers newish components for a reasonable price, and if you don't mind getting Amazon ads on your lock screen, the Prime exclusive version of the phone is even cheaper, at $180. 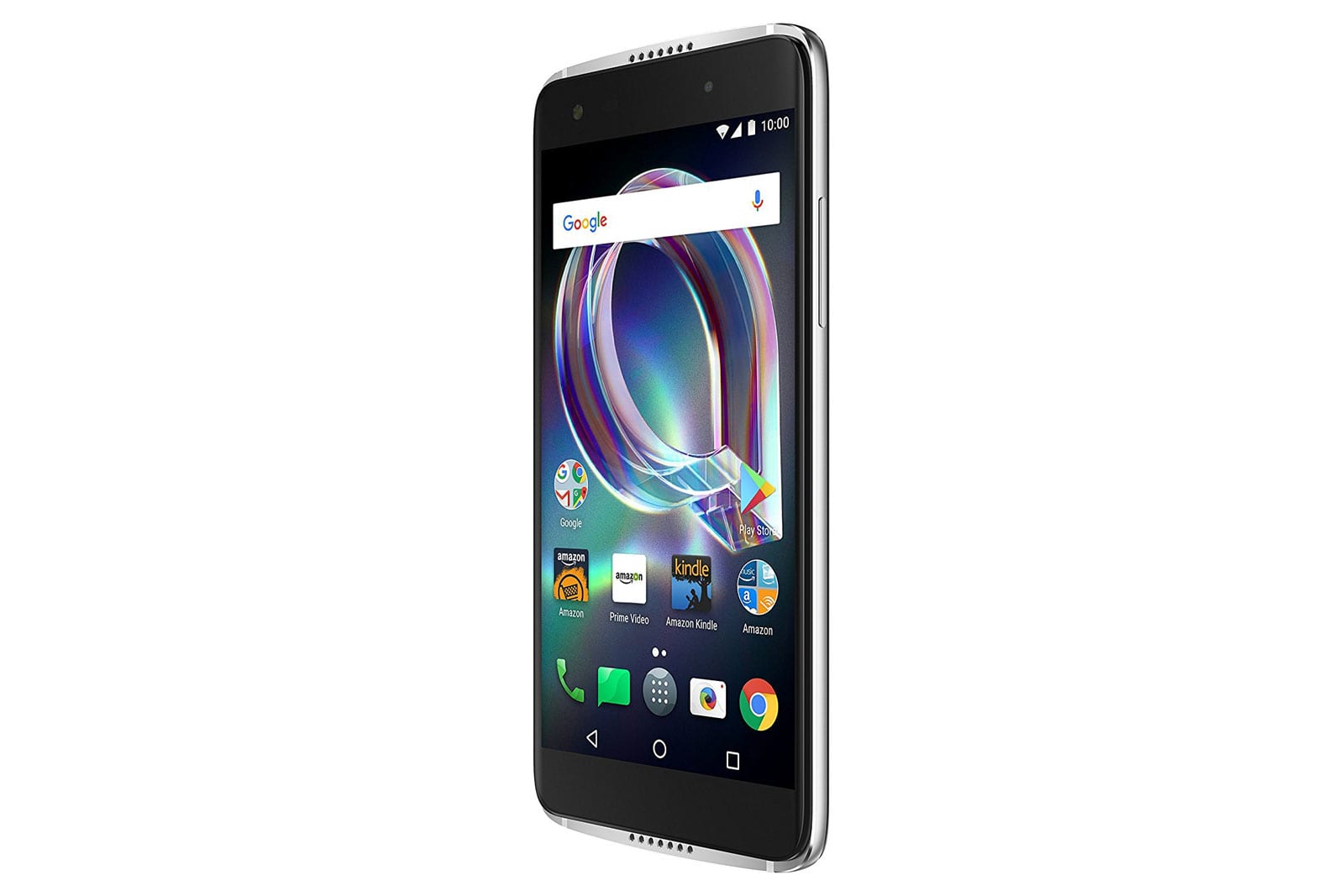 Also available as a Prime exclusive is the Alcatel Idol 5s ($200 with ads; $280 without), which has a vibrant 5.2-inch, a 1080p screen and a USB-C port and runs Android 7. Like the Nokia 6, the Idol 5s has only a single 12-megapixel rear camera, but it uses the faster Snapdragon 625 processor (the same chip used in the Moto G5S Plus). Alcatel's handset has a smaller battery than the Nokia 6 and the G5S Plus, though, so you might need to charge it more often. The Idol 5s looks and feels like a lot of Alcatel's previous handsets, with a rounded silhouette, chrome edges and a glass rear. Despite a slightly dated design, the Idol line is known for its good quality and affordable prices. Plus, this is one of the few budget phones to support all four major US carriers while packing a well-rounded feature set. The ZTE Blade V8 Pro is a compelling option. It sports a 5.5-inch 1080p display and dual 13-megapixel rear cameras that enable Portrait mode for bokeh on your photos, although you won't get iPhone-quality images here. The Blade V8 Pro isn't as adept at detecting outlines when applying the blur, but in ideal conditions it pulls off the effect well. I liked the phone's sturdy build when I tried it out in January, but it's not as pretty as the other options on this list. The V8 Pro is equipped with the same Snapdragon 625 chip as the Moto G5S Plus and the Idol 5s, but it runs the older Android 6 Marshmallow instead. It does support NFC, though, making it one of the few on this list to do so and a good option for people who don't want to give up Android Pay. 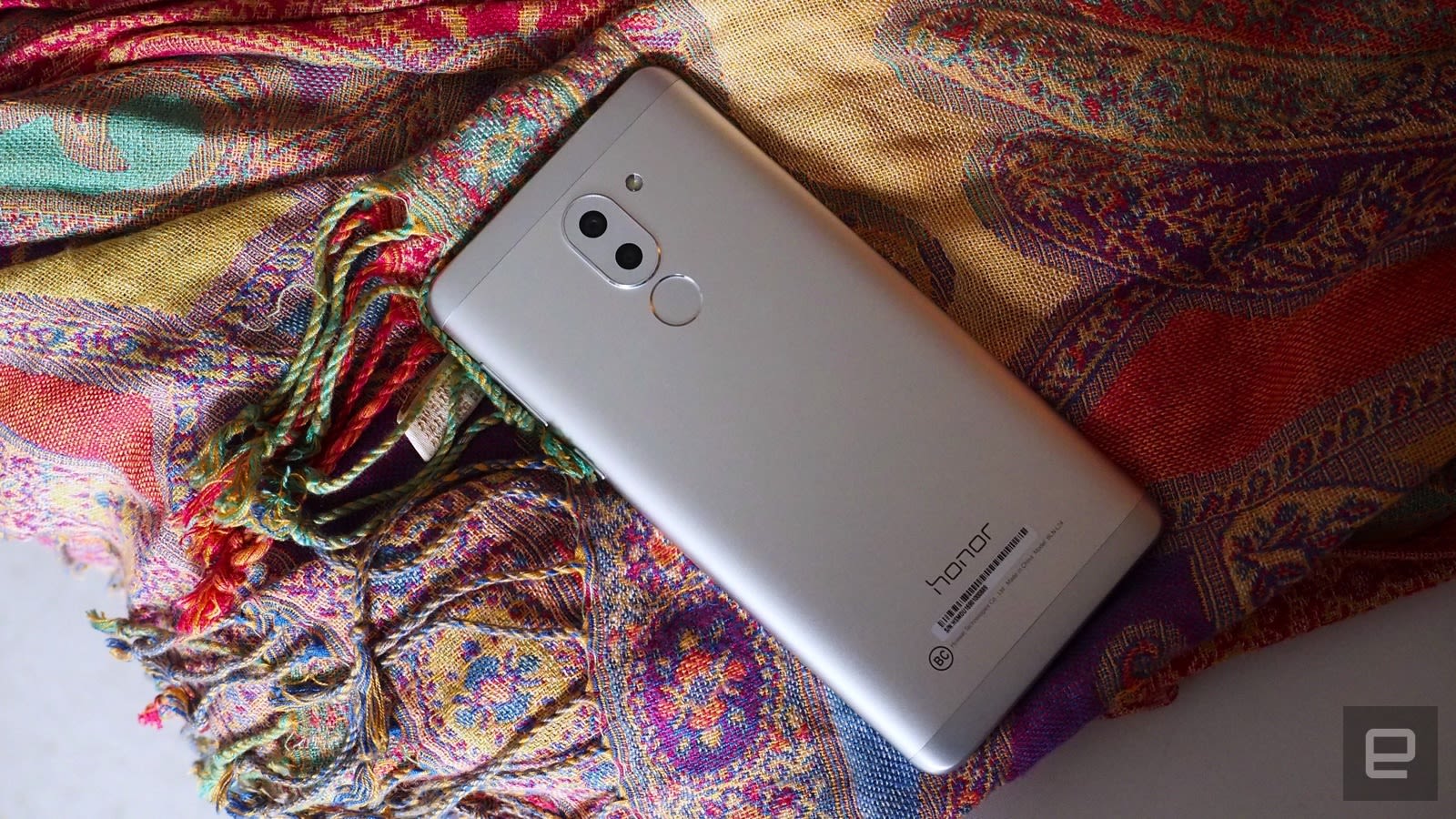 There are several other options in this space, but we'll cap off this roundup with two quick mentions. Huawei's Honor 6x is very similar to the ZTE Blade V8 Pro: It has dual cameras, runs Android 6.0 and features a 5.5-inch full HD display. But it doesn't support NFC and it costs $20 more. Also, Huawei's EMUI Android skin makes the software look cartoonish, despite adding useful fingerprint sensor shortcuts. The main reason to spend more for this phone over the Blade V8 Pro would be the Honor's more elegant metal body. 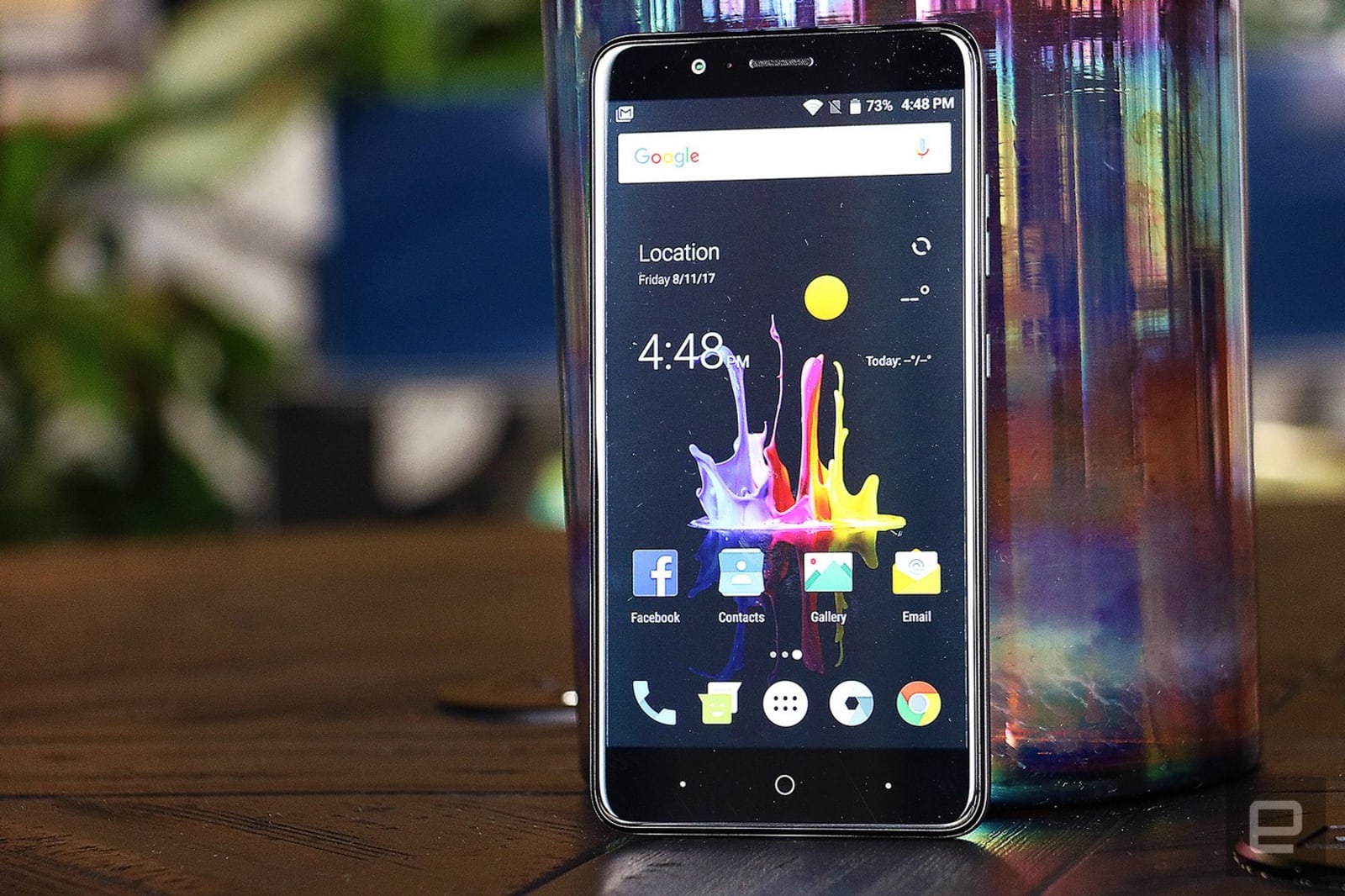 Finally, those who want a big screen at this price should consider ZTE's Blade line of affordable large phones. In particular, the Blade ZMax sports a 6-inch full HD display, dual cameras and a large 4,080mAh battery for $129. It's also impressively slim for such a large phone and was easy to use with one hand during a brief demo. Some caveats: It uses a relatively slower octa-core Snapdragon 435 CPU and is available only via MetroPCS for now, but we expect it to be sold unlocked soon as well.

With all the improvements trickling down from high-end flagships to today's budget phones, shopping for a sub-$250 device no longer feels like digging through a bargain bin of iPhone rejects. They won't be the fastest or have the best cameras, but the options in this category are respectable handsets with relatively modern features. If you have a bit more cash to spare, you'll find even better phones in the sub-$500 category that are nearly on par with flagships in terms of performance. We'll be putting together those recommendations soon, so stay tuned.