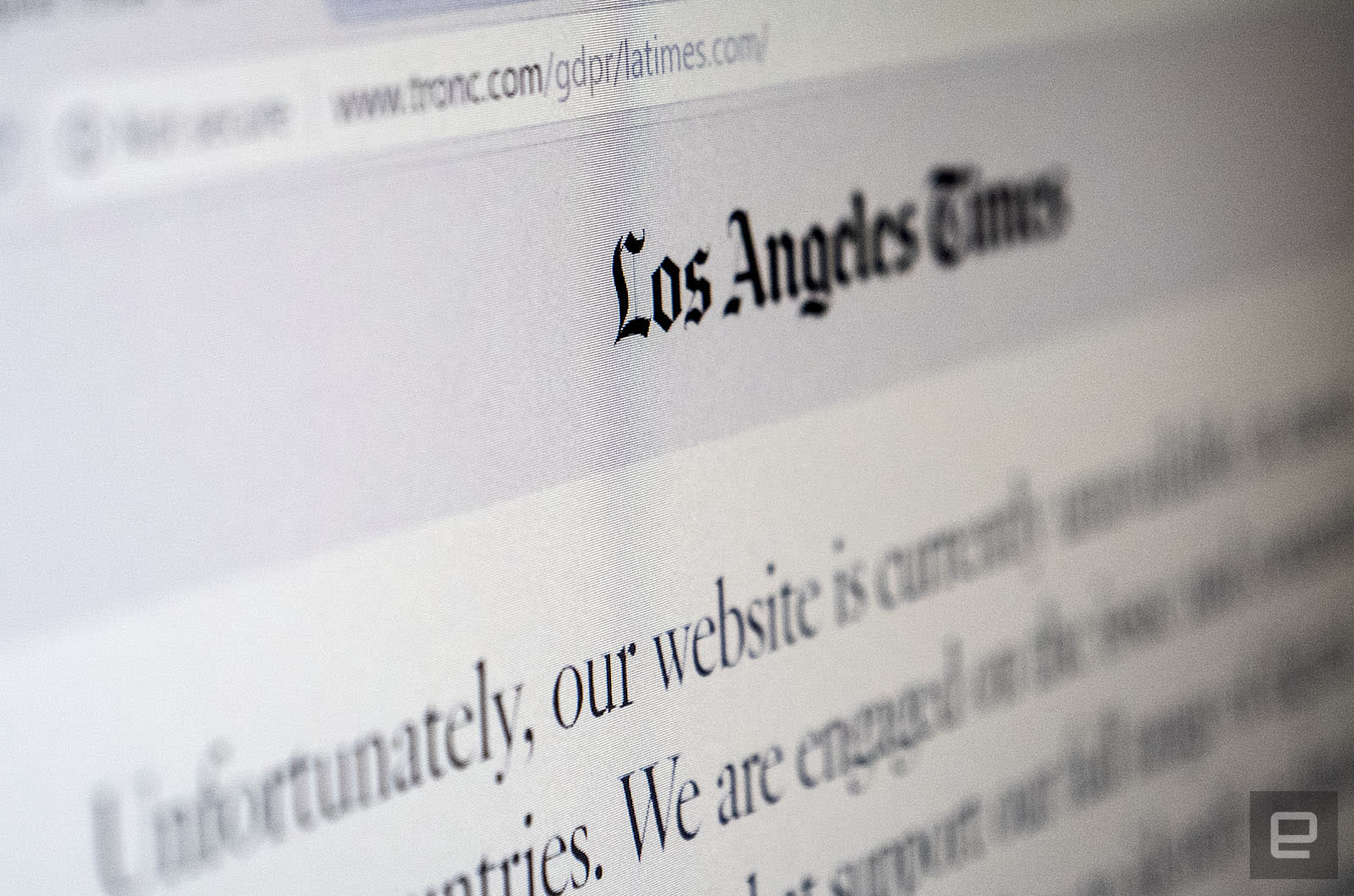 Months after GDPR privacy rules went into effect, over a thousand US news sites still aren't available in Europe. That includes outlets like WGN, the Los Angeles Times and Chicago Tribune and publishers including Tronc, Lee Enterprises and GateHouse Media. All told, about a third of the 100 largest US newspapers have blocked European visitors to their sites rather than complying with the new law, reports NiemanLab.

GDPR, aka the General Data Protection Regulation, went into force on May 25th. Sites had around two years to prepare for it, and most major organizations like the Washington Post, New York Times and CNN were accessible in Europe from day one.

Sites must disclose any data collection, why it's lawful, how long it's being held and whether it's shared with third parties or outside the EU. EU citizens have a right to demand a copy of the data in a common format and to have it erased. Larger businesses like Facebook and Google that collect a lot of personal data must employ a data protection officer (DPO) to manage GDPR compliance, but that doesn't apply to most news sites.

Blocking is a unnecessary reaction on part of these publishers. There are ways to be compliant over blocking while you figure out non-personalized ads or whatever alternative emerges. #GDPR is a valid and overdue response to invasive adtech that failed to regulate itself

Tronc, which owns the Chicago Tribune and LA Times among other news sites, has yet to comment. However, Lee Enterprises, which manages city newspapers from Arizona to Washington, has no intention of complying with GDPR because its sites don't draw enough EU visitors. "Internet traffic on our local news sites originating from the EU and EEA is de minimis," spokesperson Charles Arms told NiemenLab, "and we believe blocking that traffic is in the best interest of our local media clients."

The situation is particularly painful for US tourists in Europe and ex-pats, especially those paying for subscriptions. "In Portugal, there's a big community of people that not only reads the Portuguese media but reads the US press as well on a daily basis," said Lisbon journalist Flávio Nunes. "I was surprised when I saw that a couple of months after, they're still blocking our access. It's crazy because Europe is a massive market."

In this article: ChicagoTribune, entertainment, Europe, GDPR, Geoblocking, internet, LATimes, Tronc
All products recommended by Engadget are selected by our editorial team, independent of our parent company. Some of our stories include affiliate links. If you buy something through one of these links, we may earn an affiliate commission.