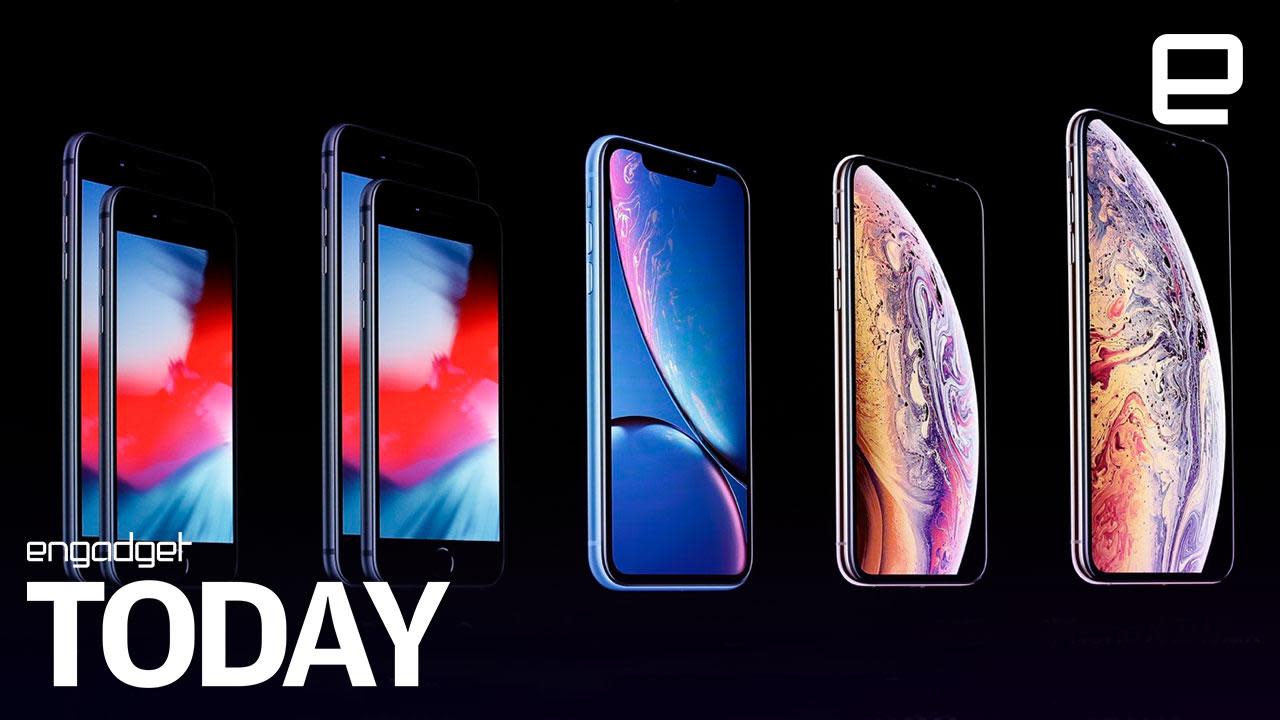 As we all wake from the haze that follows an Apple event, we've collected together all the major announcements, new products and conspicuously absent devices that came from 2018's big iPhone briefing. What's notable here is that the iPhone Xs Max, with its long, corner-to-corner display, inches close to the screen-real-estate size of Samsung's latest Galaxy Note 9. (The phablet just clinches it for now though.)

Cameras are largely unchanged from last year's iPhone X, although a new Portrait mode includes an adjustable aperture setting after you've taken your photo, allowing you to change the bokeh to your suiting. The camera team has also worked to make the phone smarter at dealing with your shots, using the iPhone itself to better process HDR shots (HDR is on by default). It's chasing the likes of Google's Pixel 2 phones, which have inched ahead when it comes to smartphone photography. With the iPhone Xs, the phone keeps a frame buffer going, ensuring (essentially) zero shutter lag when you hit the button.

These new tricks are aided by Apple's latest mobile chip, the A12 bionic. The company says it is the first seven-nanometer chip to be used in a smartphone and can run 5 trillion operations per second -- compare that to last year's chip, the the A11 bionic and its meager 600 billion. There's a six-core CPU, four-core GPU and an eight-core neural engine all packaged inside.

That 7nm chip also means there are power savings to be had. Compared to the iPhone X, Apple believes that the iPhone Xs will eke out 30 more minutes of battery life and that the Xs Max will last for up to an hour and half longer. Other notable changes? Support for dual SIMs and phones that are made of more-renewable materials.

Perhaps the biggest talking point was pricing. In true iPhone X style, these new phones will not be cheap. The iPhone XS will be available to pre-order from September 14th, launching in earnest on September 21st. Prices will start from $999. The iPhone XS Max is $100 more expensive: The smallest-capacity 64GB model will cost $1,099.

Arguably the most notable new product, the iPhone Xr delivers iPhone X style with a price cut and some caveats. It has a lower-resolution 6.1-inch LCD screen and a single rear-facing camera, but otherwise it delivers on the specifications of the Xs series. There's the same A12 bionic chip and Face ID with the front-facing TrueDepth camera as well as a bunch more color options (yellow, coral, white, black and blue).

We got to test the phone out in person and reckon the display (which lands right in the middle, size-wise, of the iPhone Xs and Xs Max) might not reach the dizzying heights of OLED. But it remains a beautiful smartphone display in its own right.

The bigger question is whether you consider the iPhone Xr's $750 a reasonable price for a new iPhone that isn't the company's top flagship. The iPhone Xr is coming later than the other device and will be available to pre-order from October 19th, with the phone arriving a week after, on October 26th.

The quiet end of headphone jacks and iPhones iPhone owner? Spent a lot on the latest wired headphones? You're going to be annoyed with Apple's latest phones. The company has now killed the last holdouts of the iPhone headphone jack (the iPhone SE and the iPhone 6S) and will not be bundling a lightning-headphone adapter with the iPhone Xs, Xs Max and Xr.

Your software update is nearly here

So maybe you're not upgrading but you want your gosh-darned Memojis and something resembling a digital wellness initiative? Tim Cook announced that iOS 12 will be available to download on September 17th; it is even supposed to improve performance on older devices. On the same day, Apple TV owners will get an update by adding Dolby Atmos audio while the HomePod will be able to make phone calls, search music by lyrics and more. Last but not least are your humble MacBooks: macOS Mojave will make its debut on September 24th.

The Apple Watch has a bigger screen, thinner body and is potentially life-saving Apple's Watch Series 4 represents the first change in screen size since the smartwatch debuted, with 40mm and 44mm models incoming on Friday, September 21st. They're both packing larger displays (35 percent and 32 percent, respectively) with much less bezel. Because 2018.

But if the bigger size sounds off-putting, at least the device is thinner. There are more customization options for watch faces, and crucially, Apple has managed to bake in an FDA-approved electrocardiogram (ECG). Thanks to a new accelerometer and gyroscope, the wearable can detect when you slip or fall. Prices have bumped up slightly since the Series 3: It will cost $399 (£399) for GPS models and $499 (£499) for the 4G versions. Pre-orders open this Friday, September 14th.

Headphone socket aside, Apple is halting sales of the Apple Watch Edition (the fancy ceramic iteration) and wasn't ready to reveal its next-generation AirPods (even if they made an appearance in the preview reel before Apple's showcase kicked off). It also had nothing to say about its much-hyped wireless-charging mat, AirPower, and it struggled with the fact that the company's boardrooms look nothing like its advertisements.

In this article: AOLoriginals, apple, applewatchseries4, DailyShow, Engadget, EngadgetToday, EngadgetVideo, entertainment, gadgetry, gadgets, gear, iphone2018, iphonexr, iphonexs, iphonexsmax, mobile
All products recommended by Engadget are selected by our editorial team, independent of our parent company. Some of our stories include affiliate links. If you buy something through one of these links, we may earn an affiliate commission.