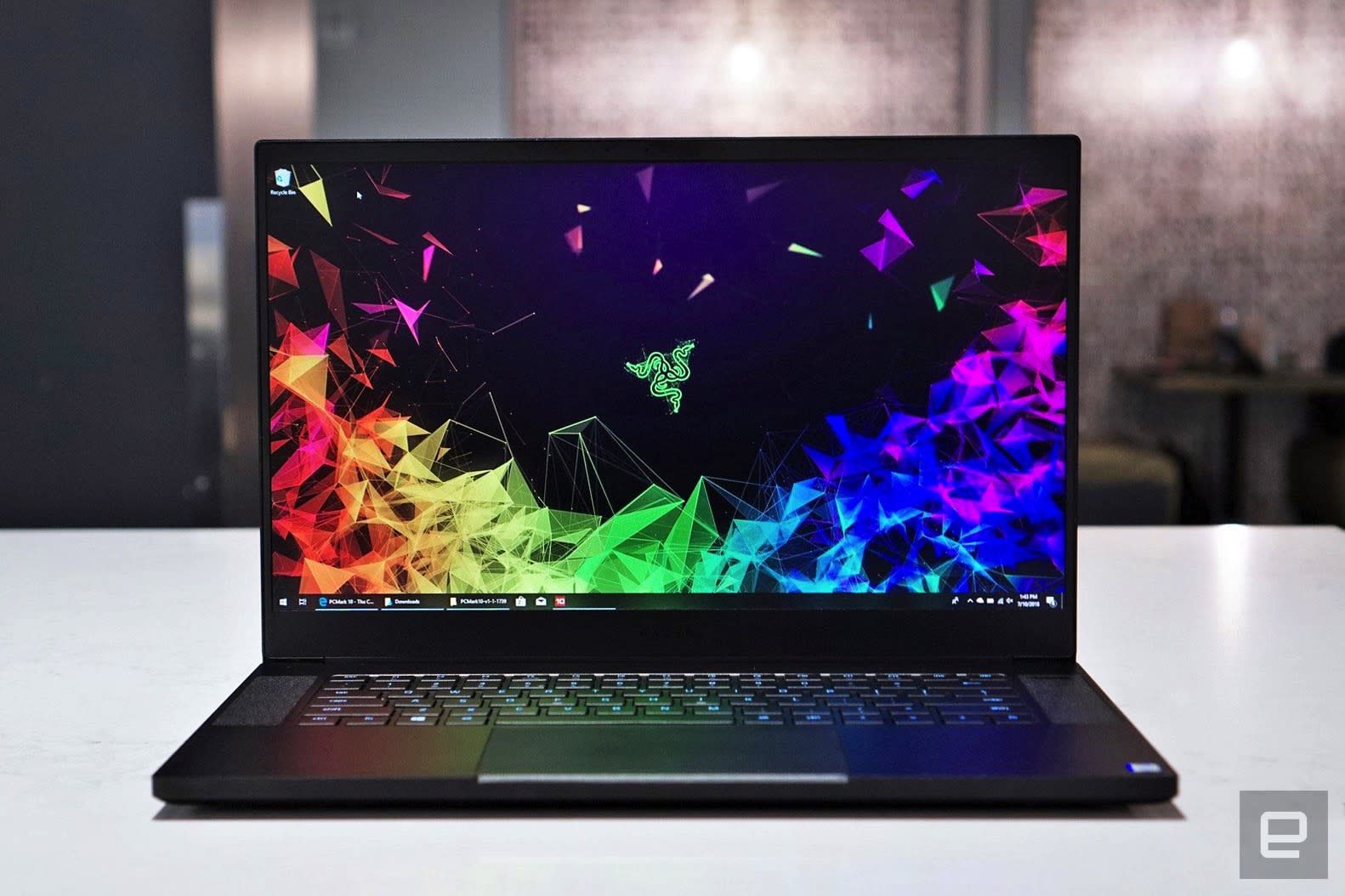 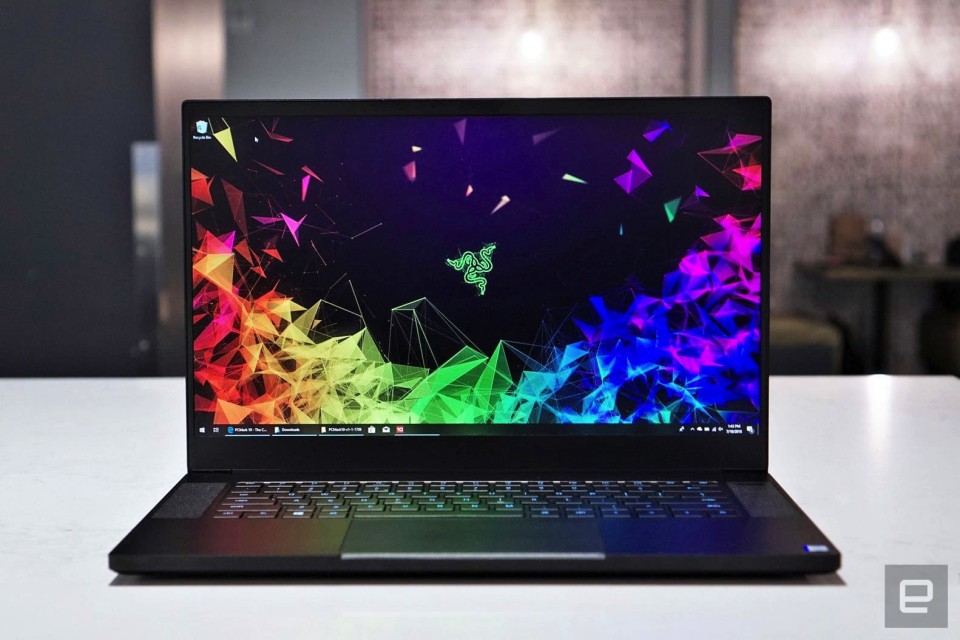 It used to be tough to find an ideal gaming laptop -- one that didn't feel like a sack of bricks and have awful battery life. Now we have the opposite problem: There are a ton of great options! They're huge improvements over what came before in almost every way. And, best of all, they also pack in enough power to rival gaming desktops. So how do you actually choose what to buy? It's easier than you think -- once you know what to look for.

Big shocker, right? Your budget will be the main factor that determines which laptop you can get. Lucky for you, there are plenty of great deals for discerning buyers, and beefier machines are cheaper than ever. It used to be impossible to find decent gaming notebooks for less than $1,000, but over the past few years PC makers have solved that puzzle. Dell's G3 lineup, the follow-up to last year's popular Inspiron 15 7000, starts at just $700 for the 17-inch model. And there's also the company's G5 and G7, which offer more powerful specs for a bit more. In general, you can expect gaming laptops under $1,000 to feel a bit cheaper than pricier options, and they won't feature the fastest hardware either. 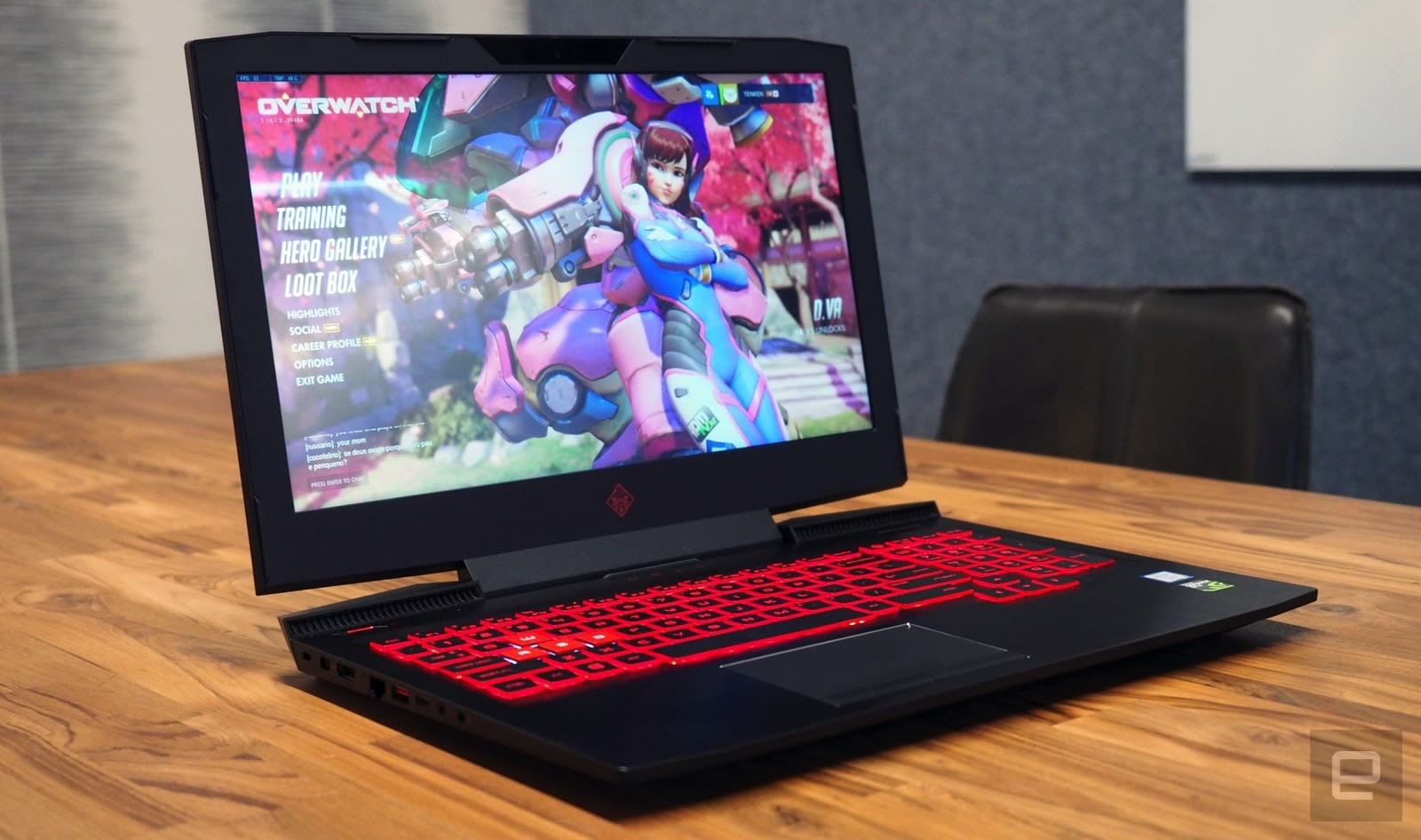 Going beyond $1,000 gets you into mid-range territory, like HP's Omen and Dell's Alienware notebooks. With these machines, you'll get better build quality (metal cases!), power-user features like overclocking, and, well, brand recognition. Just as Apple products hold a certain consumer cachet, you'll have more credibility among gamers if you're rocking a mid-range machine than you would with a budget laptop. Of course, that won't matter to everyone. (And, kids, your gaming skills are more important than the cost of your machine.) Even if your budget has room for a slightly more expensive laptop, it's worth taking a step back and asking yourself if you could live with something cheaper and put the rest of your money toward some accessories (like a nice gaming monitor).

If you want nothing but the best, be prepared to spend over $2,000. Today's high-end gaming notebooks have come a long way from the giant rigs of the past, but you'll still have to shell out a ton of dough for a powerful configuration. That includes laptops like MSI's GS65 Stealth Thin, Gigabyte's Aero 15X and Razer's newest Blade. For the price, you'll get lighter-weight machines (as low as 4.2 pounds), beefier graphics and CPU options and better display options (along with thinner bezels).

What GPU and CPU do you need?

Let's be honest: NVIDIA is currently the king of laptop gaming. Its 10-series GeForce GPUs cram a ton of power into notebooks. And its Max-Q designs are even more efficient, allowing them to fit into slimmer machines. So it's no wonder most gaming laptops today include NVIDIA's technology, especially those aiming to combine power and portability. (NVIDIA announced its 20-series desktop GPUs in August, but that new technology hasn't reached its laptop line yet.)

The wide assortment of GeForce 10-series GPUs might seem confusing at first, but they're easy to grasp once you know what they offer. The GTX 1050 and 1050Ti are NVIDIA's entry-level cards, and they're ideal if you don't plan to game beyond 1080p. They're powerful enough to play modern games between 30 and 60fps, but the experience really depends on the title. If you're just looking to play some light MOBA titles, like League of Legends and Dota 2, they're more than enough. With the GTX 1060, you can expect more solid performance at 1080p. I saw between 60 and 70fps in The Witcher 3 on HP's Omen 15 with that GPU, while Overwatch reached 120fps.

Stepping up to NVIDIA's GTX 1070, you'll get a machine that's powerful enough to play games at 1440p (2,560 x 1,440) as well as reach even higher frame rates at 1080p. That's particularly useful for the wave of laptops this year that have high-refresh-rate 120Hz and 144Hz panels. (More on that below.) The GTX 1070 is ideal if you want to connect to a 4K TV for big-screen gaming. You'll see a slight bump beyond the standard HD resolution, and you'll have enough horsepower for higher graphics settings. Just don't try to play complex games in 4K natively -- that's what the GTX 1080 is for.

We've seen only a few laptops take advantage of that top-end GPU, like ASUS' ROG Zephyrus, but it's undeniably powerful. With the Zephyrus, I was able to play Hitman at 45fps and The Witcher at around 35fps in 4K, which is simply astounding for a thin 4.9-pound laptop. You'll find the GTX 1080 on plenty of bulkier gaming laptops and large 17-inch machines. Outside of the Zephyrus, you won't find it on many 15-inch machines, though. It's likely too much of an engineering hassle to cram it into smaller cases. And if you have your heart set on a GTX 1080 machine, be prepared to pay nearly $3,000 for most configurations.

And what of AMD? At CES earlier this year, the company announced the Radeon Vega mobile GPU, but we've yet to see that in any laptops. You can also find Vega graphics integrated with Ryzen laptop processors, though it's not nearly as powerful as the GTX 1050. There are a handful of notebooks out there with Intel and AMD's new collaboration, the Core processor with RX Vega M graphics, which should be fast enough for decent 1080p gaming. But they typically cost more than comparable NVIDIA systems.

Thankfully, choosing a CPU is a lot less complex. For the most part, you'll see Intel's eighth-generation H-series processor in gaming notebooks today, which will offer solid gaming performance across the board. That family of chips is more powerful than the U-series, which are meant for less demanding ultraportable notebooks. Just make sure you're getting an eighth-gen Intel processor if you want the best of the best. You might run into older stock equipped with the seventh-gen processors. They're still very capable, and worth considering if you're getting a great deal. Ultimately, your GPU matters a lot more than the CPU when it comes to gaming performance.

Choosing a screen: It's about more than just size

You could call 15.6-inch screens the sweet spot for most gaming notebooks. They're large enough to give you a nice view of the action but small enough to make laptops portable. But, just as with any PC, you have a few options. If you prefer a smaller screen, you can take a look at 13- and 14-inch options, like the Alienware 13 and last year's Razer Blade 14. Just pay close attention to how much they weigh: The Alienware 13 currently clocks in at 5.8 pounds, heavier than most 15-inch laptops we've seen this year. And if you want to go all out, take a look at 17-inch notebooks. They're tougher to travel with, but far more immersive once you start gaming and can pack in more powerful hardware.

Choosing the right screen resolution and refresh rate is also important, since that's directly tied to your gaming performance. At this point, you'll want a 1080p screen. That might seem a bit regressive in the 4K era, but it'll let you reach higher frame rates. 1080p is also a compelling option with 120Hz- or 144Hz-refresh-rate panels, like we've seen on plenty of gaming notebooks this year. That higher rate smooths out gameplay as you move beyond 60 frames per second. Typically, that would lead to stuttering and other performance issues on a 60Hz screen.

The standard solution for dealing with high-frame-rate issues is Vsync, which caps gameplay at your monitor's refresh rate. But that introduces some problems of its own, like stuttering and slowdowns. That's where variable-refresh-rate technology like NVIDIA's G-Sync and AMD's FreeSync comes in. They match how your screen is refreshing with your gaming performance. That's useful for high-fps games, as well as for demanding titles where you might not reach your monitor's maximum refresh rate. And most important, it avoids the problems you'd typically have with Vsync.

G-Sync screens are expensive, though, and we haven't seen the technology implemented in many of the 120Hz and 144Hz displays in the recent wave of gaming laptops. Similarly, there aren't many FreeSync-capable laptops around, since AMD's mobile GPU still hasn't arrived. At this point, you're better off prioritizing screens with higher refresh rates.

Moving beyond 1080p, you'll also find 1440p (2,560 x 1,440 pixels) on some laptops. That offers a slight improvement in sharpness, but it'll be more noticeable when you're browsing the web or editing documents than it will be while playing games. And of course, 4K displays are making a big splash this year. You'll pay a huge premium for those, though, and we don't recommend 4K unless you really need those extra pixels.

If your machine doesn't have NVIDIA's GTX 1080, you'll have a hard time reaching 30fps, the bare minimum for decent gameplay, while running many titles natively in 4K. That means you'll likely end up running games at a lower resolution, which defeats the point of getting a high-res display in the first place. Using LCD screens outside of their native resolution also leads to blurriness and other image-quality issues. If you plan to binge a lot of 4K video while your eyes are inches away from your screen, then it might be worth it, but for most folks it won't be. Instead, put the money you'd spend toward the 4K upgrade on a decent gaming monitor or a 4K HDR TV.

Other points to consider

So what should I get? 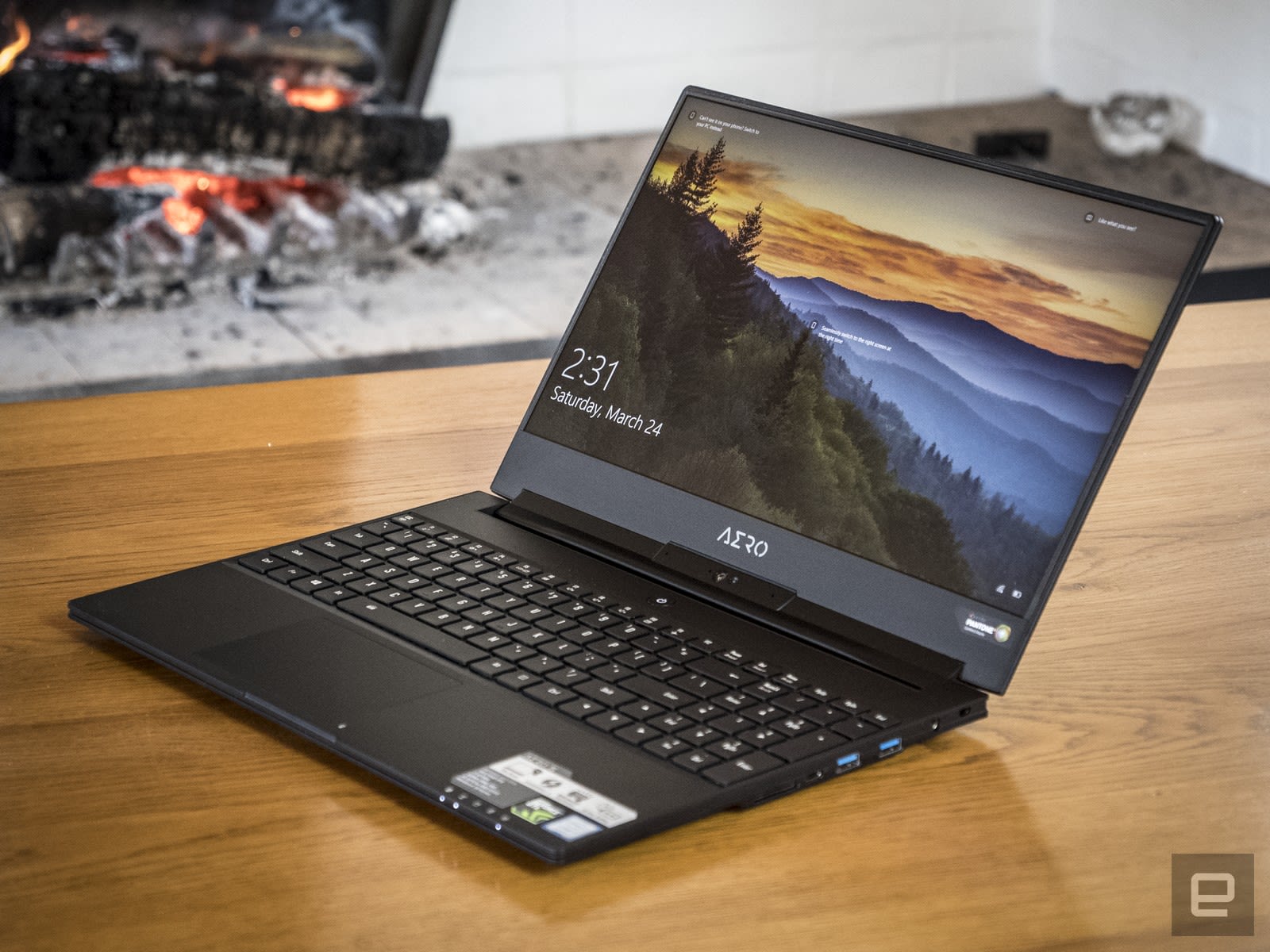 If your priority is smooth gameplay, I'd recommend a laptop with a 15.6-inch 1080p screen and either NVIDIA's GTX 1060 or 1070 Max-Q GPU. The former will run most games well at 60fps and beyond, while the 1070 will let you reach even higher frame rates and better-quality graphics settings. Mid-range machines like HP's Omen and some of Dell's Alienware models are a good start. If you've got a slightly bigger budget, you should consider laptops with high-refresh-rate screens: MSI's GS65 Stealth Thin, Gigabyte's Aero 15X, Razer's Blade and pricier Alienware configuration.

But if you're on a budget, stick to machines with the GTX 1050, 1050Ti or 1060 Max-Q, like Dell's G3 and G5 series. You won't get high-refresh-rate monitors with these, but they'll have enough horsepower to reach a silky 60fps. They're ideal if you're mainly playing MOBA titles and undemanding games like Overwatch.

It's easy to get overwhelmed by the number of options today, but that variety is ultimately a good thing. What was once a category filled with huge, ugly monstrosities now includes genuinely gorgeous machines that aren't much heavier than a MacBook Pro.

In this article: amd, asus, dell, DellG3, gadgetry, gadgets, gaming, gaminglaptops, gear, GeForce, GigabyteAero15X, intel, nvidia, personal computing, personalcomputing, RazerBlade, thebuyersguide, Zephyrus
All products recommended by Engadget are selected by our editorial team, independent of our parent company. Some of our stories include affiliate links. If you buy something through one of these links, we may earn an affiliate commission.