The researchers will monitor the heart rhythms of 400,000 volunteers.

The Apple Heart Study Stanford launched back in 2017 has garnered so much interest that it was able get 400,000 volunteers. Now, the researchers have revealed the finer details about the study, including what the testers can expect. To start with, each participant has to have access to an Apple Watch (series 1, 2 or 3) and an iPhone, because the trial is meant to examine whether the wearable can accurately detect atrial fibrillation (AFib) or irregular heartbeats.

Cupertino updated the device's heart monitoring features last year in hopes that it'll be able to recognize irregular heart rhythms before they lead to more serious conditions. The Watch's Apple Heart Study app is the one responsible for identifying abnormal heart rhythms by analyzing pulse data collected by the device's optical sensor. That app checks the testers' heart rate for the presence of an irregular pulse. If it regularly detects an unusual pulse rate, then that participant will receive a notification asking them to schedule a visit with one of the study's doctors. The researchers will also send them electrocardiography patches to record the electrical rhythm of their hearts for up to a week. 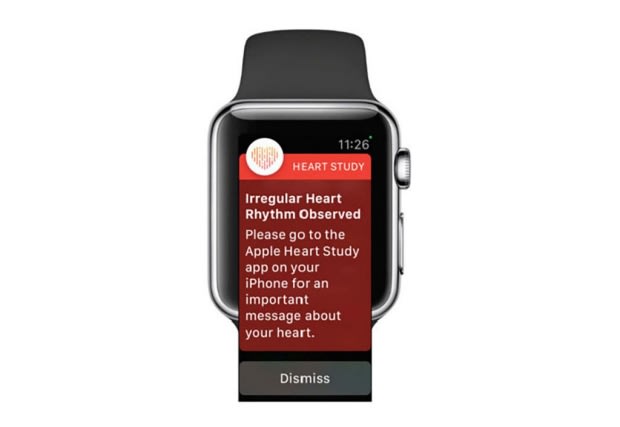 According to the CDC, AFib leads to 130,000 deaths and 750,000 hospitalizations every year in the US alone. Apple's technology could help prevent those, but since it's so new, researchers need to look at it more closely first. "We now have access to high-quality sensors that can measure and detect changes in our bodies in entirely new and insightful ways without even needing to go to the doctor, but we need to rigorously evaluate them," explained Dr. Mintu Turakhia, one of the study's lead investigators.

The researchers will look at three factors in particular. They'll keep an eye on how many users who received the notification actually have AFib, based on their ECG patch data. The researchers will also tally how many of those who got the notification chose to get medical attention. Perhaps most importantly, they will determine the device's accuracy when it comes with irregular heartbeat detection by comparing the data it gathers with the simultaneous ECG patch recordings. According to Stanford, the researchers are already in their final phase of data collection, and the study will be completed early next year.

All products recommended by Engadget are selected by our editorial team, independent of our parent company. Some of our stories include affiliate links. If you buy something through one of these links, we may earn an affiliate commission. All prices are correct at the time of publishing.
Stanford outlines its massive Apple Watch heart rate study
apple
Applewatch
gear
heartstudy
medicine
stanford
study