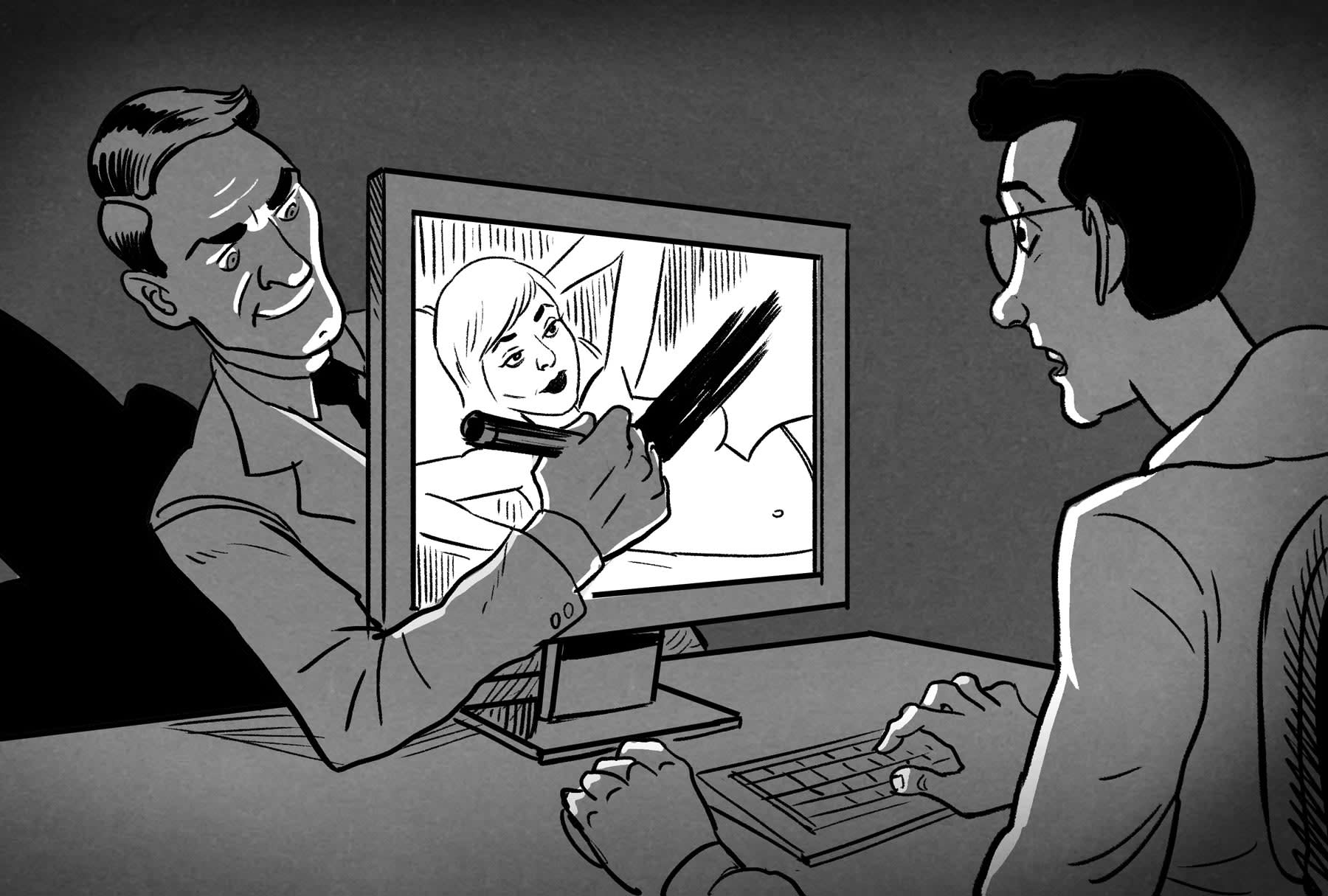 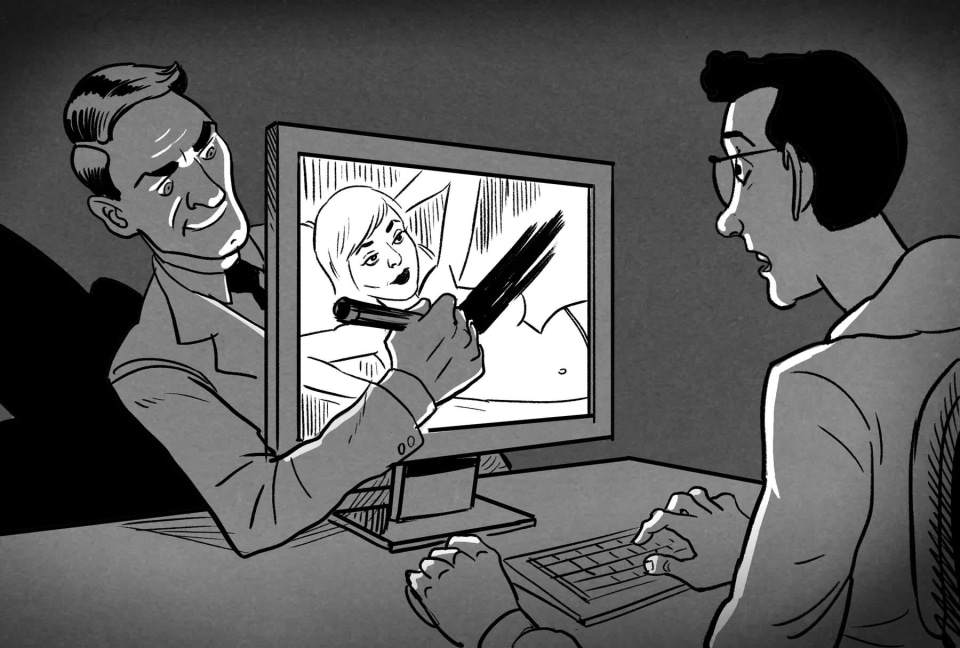 Illustration by Koren Shadmi for Engadget

During the Great Internet Sex War, that began in the United States during its Facebook Era, people were forced to stockpile their porn. Lube was bought by the drum and hidden in bunkers, alongside vibrators and air-gapped computers holding valuable troves of accurate, non judgemental sex information. Gimp suits were stored upright, oiled, and ready for doomsday's call. Explicit gifs became a black market commodity, and there were rumors of a Thunderdome ruled by cam girls. Every sexual identity, except the singular one deemed safe by the corporations, went into hiding. Fear prevented even the mere mention of sexual pleasure on the networks and in communications.

Don't laugh: your phone may transcribe it incorrectly and include "sexual slang" which this week was made "illegal" on Facebook — along with all forms of sexual speech and expression. ("Free speech, my ass." - Everyone.)

When reached for comment, a Facebook spokesperson told Engadget via email that "most of the sexual solicitation policies that you have called out aren't new." Facebook explained:

On October 15, we added a section entitled, "Sexual Solicitation" to our Community Standards. Previously, our sexual solicitation policies were included within Section 8: Sexual Exploitation of Adults and Section 14: Adult Nudity and Sexual Activity (happy to share the relevant parts of those sections pre-October 15, if helpful).

This change was prompted, in large part, by conversations with our content reviewers, who told us that the sexual exploitation policy did not adequately distinguish between exploitation (e.g. "My ex was a slut. Look at the photos she sent me.") and solicitation (e.g. "Looking for swingers. Friday at 8 PM, [name of bar]. Wear pink."), leading to confusion among reviewers, as well as the perception that we treat sexual exploitation and solicitation the same.

We recognize that not all solicitation leads to exploitation.

According to the policy, public discussion of "sexual violence and exploitation" is okay, but anything encouraging sex for pleasure between adults is now a bannable offense in public posts. They don't say anything about private messages, but we know they comb DM's and have a less than transparent approach about it, so maybe watch what you say there, too.

If only Facebook policed hate speech with the same terrifying and brutal efficiency — though I think we all know by now what gods Facebook sacrifices to, and who Facebook serves when they claim an action is taken for "community safety." In other words, Holocaust deniers and inbred racial purists of every social strata still have their safe space.

Yet, like I said, the shiny happy darknet that has made a science of sexual censorship was just one of two internet giants to take extreme measures to eliminate sane human sexual expression from the public internet this week.

Tumblr's announcement to remove and forbid sexual content revved the dark promise of FOSTA's legalization of sex censorship and drove it off a cliff. Tumblr announced Monday that on December 17, all adult content will be banned and excised from the service.

When I reported on Tumblr's last attempt to disappear sexual expression in 2013, back when it was Yahoo's fixer-upper, that affected an estimated 12.5 million blogs. Considering that Tumblr use peaked in 2014, that number is certainly higher.

Hey — don't knock my Orwell joke. In 1984, the junior Anti-Sex League was a pro-celibacy group that acknowledged the necessity of standard sexual procreation. It pushed the agenda of the Party, which was to "make sure people are in marriages that are planned to be unsatisfying and that sex is vilified." Et tu, Silicon Valley?

Anyway. Like it did the last time Tumblr went all Republic of Gilead on sex, the internet lost its mind upon hearing Monday's announcement. Tumblr handled the news abysmally, and immediately implemented its automated censorship flagging system so badly, that many of us rushed to double-check that Marissa Mayer wasn't still in charge. (Tumblr is now part of Verizon, which also owns Oath/Engadget, and may still control shares in Ajit Pai).

Tumblr told Engadget via email that "machine classifiers, in general, take time" and that "time improves their performance," and reminded us that "flagged content is not being deleted, rather set to private such that it's viewable only to the owner of that content."

Some of my photos flagged as explicit by tumblr's new algorithm. I would say I'm impressed with how bad it is, but... Yeah this was about what I expected#RipTumblr pic.twitter.com/BF5xQx3xo0

When reached for comment as to why, Tumblr referred us to its blog post's generic statement about making a "safe place for creative expression" and "impact across different age groups, demographics, cultures, and mindsets." Further, the company stressed that the policy has not yet been enforced, as per its statement.

So, since that's what they all say, it's probable no one really knows why Tumblr is doing this; FOSTA has been blamed, and so has Apple's app store gatekeeping practices. Rightly so, because Apple's role in censoring and suppressing sexual speech is longstanding, and so vile and insidious that it'll make you rage-smash an iPhone if you take it all in at once.

But the arc of internet sex censorship is long, and it bends as far away from justice (and reason) as possible. Corporations controlling the internet had been steadily (and sneakily, hypocritically) moving this direction all along, at great expense to women, LGBT people, artists, educators, writers, and marginalized communities — and to the delight of bigots and conservatives everywhere.

The list goes on. Instagram goose-steps for Facebook's censors; Amazon buries sex books; Patreon, Cloudflare, PayPal, and Square are among many which are tacitly unsafe for anyone whose business comes near sexuality. Google's sex censorship timeline is bad, YouTube is worse. Twitter teeters on the edge of sex censorship amidst its many uncertainties of trust for its users.

So, if you like big brands, advertisers, and white supremacists, it appears the corporate internet has you covered.

One thing is true: people loved the open internet when it was a) not under corporate stewardship hearkening back to 1950s values, and b) you could find people doing all kinds of sex in its different corners. Erasing millions of sex blogs and repressing sexual speech like Goebbels is the sign of a sick ecosystem, the opposite of a future-facing business plan and ignorant of millions of people who disagree wholeheartedly.

Tumblr says they're erasing a million-plus blogs and decimating communities to create a "better, more positive" experience; Facebook, as usual, claims to be "encouraging expression and creating a safe environment."

I don't think any company that actively erases positive sexual expression is going to wake up to the fact that what they're doing is regressive at best and harmful at worst. When given the opportunity to revert these policies, like if FOSTA was dumped, it's clear none of them would. After all, FOSTA with all it's ignoring of women and conflating of sex work with rape, was a bipartisan bill -- and its most pivotal supporter was Facebook.

But please don't fret. Stay sexy and sharp, because if anything is certain it's this: They will all become MySpace eventually.

In this article: 1984, apple, badpassword, business, censorship, column, Facebook, FOSTA-SESTA, gear, GeorgeOrwell, internet, lgbtq, Oath, opinion, Patreon, PayPal, politics, security, services, sex, sexuality, tomorrow, Tumblr, Verizon, YouTube
All products recommended by Engadget are selected by our editorial team, independent of our parent company. Some of our stories include affiliate links. If you buy something through one of these links, we may earn an affiliate commission.