I sat in the lobby of the Sister City hotel in downtown New York City, laying back on a comfy couch, breathing as deeply as I could. Bjork stayed here for a month last year. I thought that maybe if I breathed hard enough, I could absorb some of her essence.

It's a surprisingly unassuming setting for Kórsafn, the "generative audio experience" that the Icelandic musician created in partnership with Microsoft and Sister City. There are no displays, no laser beams, no smoke machines. If you didn't know about the installation, you might miss it. At the right time of day, this lobby could be a quiet respite from New York's unceasing hustle. But the sound installation -- or in Sister City's words, its new "lobby score" -- takes it a step further and transports you (not literally) to a transcendent realm.

The relative peace and stillness in the lobby was punctuated at random moments by haunting choral voices from overhead speakers. Every few seconds, heavenly high notes rang out, followed by deep, booming chants, altogether sounding like a horde of ghosts playing a taunting game of choral peekaboo.

Of course, it's not supernatural. It's Microsoft's AI using feedback from a camera installed on the hotel's roof to determine which of Bjork's selected works to play. "Kórsafn" translates to "choral archives," and fittingly it features snippets drawn from the musician's favorite arrangements of her career, performed by Iceland's Hamrahlid Choir. Even as disjointed chunks, the vocal clusters sounded otherworldly, lending an ethereal air to the space.

Microsoft used what it calls an automated, long-term AI-training algorithm to understand weather trends via the streaming camera and detect things like snow, rain, clouds, clear skies and even bird flocks. The AI is even smart enough to distinguish among types of clouds, like cumulus or cirrus, according to Microsoft Director of Strategic Partnerships Amy Sorokas. It decides which vocal clusters to play depending on what's overhead. When the sun is shining, for example, the AI plays higher-pitched clusters. Since I was there in the evening, I heard more low tones than someone there during an afternoon listening session would have.

In the lobby, you can't tell or even imagine what might be crossing the rooftop camera's line of sight. All you get are the clusters of voices that ring out of the speakers overhead, and the effect is almost unsettling. It's not something you'd expect to hear in a hotel lobby, but this is by design. Those in the know, like the roomful of media on opening night, might find it fun to try to guess what triggered the sound. Hotel guests who haven't been briefed, however, might be confused.

"For me, the interesting thing is exciting this notion of curiosity," Sorokas said. "Like, wondering what made that sound happen but not explaining it so totally that people feel like, 'I know exactly what's happening.'" It is this sense of wonderment that she believes makes a difference. "It kind of makes you relax a little bit if you let yourself, just let your mind wander." 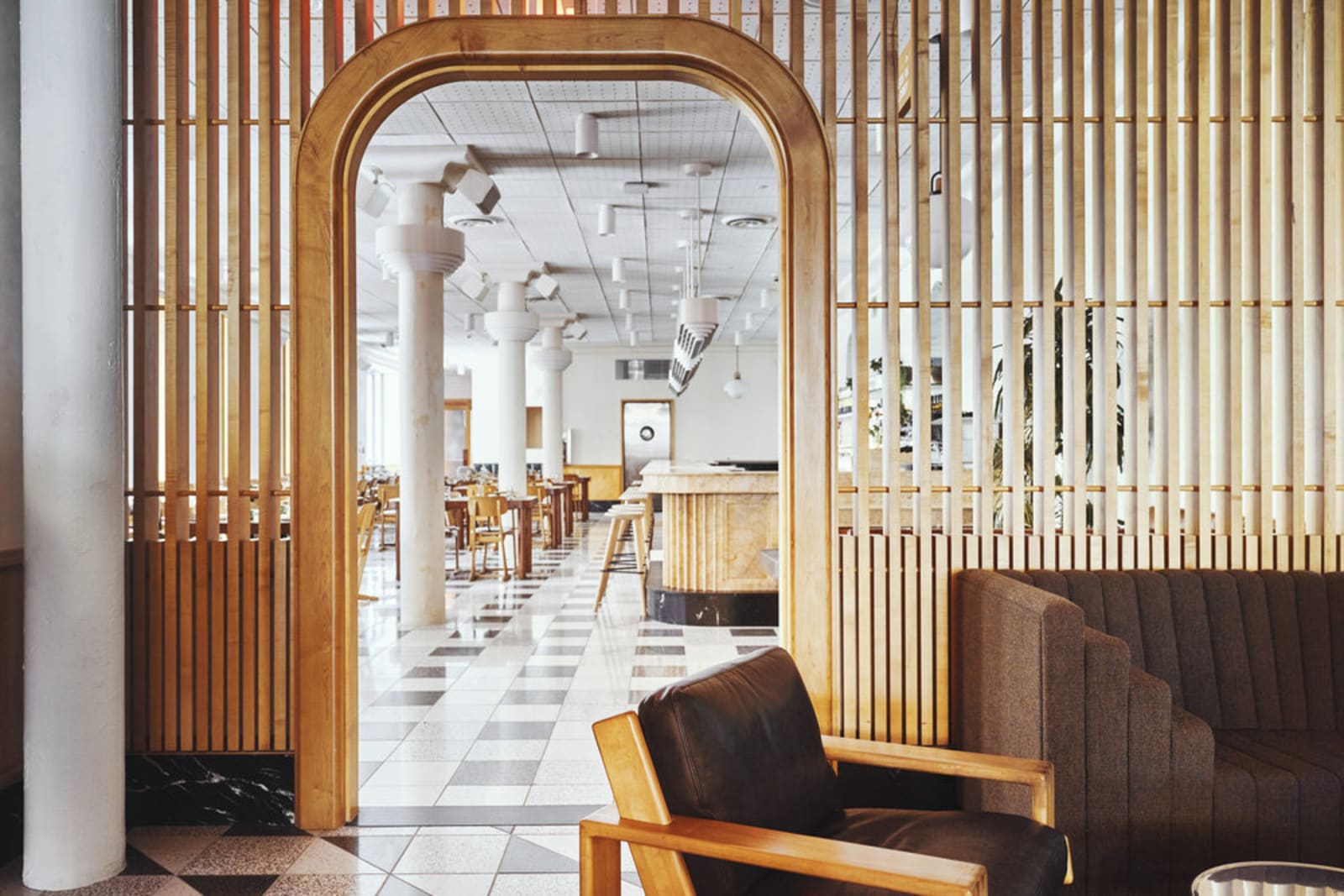 Ryan Bukstein agreed. He's the Vice President of Brand for Atelier Ace, which runs Sister City, and he believes that the score offers an unexpected environment that jolts visitors' awareness. "Every time you walk into a space now, you hear playlists," he said. "We wanted to score, because it really helps take people out of their normal of what they're used to hearing." This isn't the first time a custom score has been designed for a hotel or a restaurant, of course. Composer Ryuichi Sakamoto has made original music for museums and buildings before, even using light and wind sensors to change the music during the day. The hospitality industry has also opted for unique soundtracks over generic playlists, though those are still composed of individual tracks. It's not even Sister City's first time doing something like this: Its inaugural score launched with its opening last year, featuring work from experimental electronic musician Julianna Barwick.

Yet Kórsafn is still an unconventional experience that manages to be enjoyable. I only sat in the lobby for about half an hour, which is far longer than most guests might, and though some of the motifs eventually felt slightly repetitive, the voices of the choir left me feeling relaxed. Each time a different vocal cluster played, I wondered if a bird had flown by -- or, since this is rat-infested New York City after all, whether a rodent had skittered past the camera. Though that's a chilling thought, the otherworldly sounds helped make the city's grit feel far away.

I could listen to this soundtrack all day, as it's exactly the unobtrusive type of background noise I need to work. It's mostly due to the style of music, but the randomness of the AI generation also keeps things from getting boring and becoming a lullaby. The lobby is open to the public, and you can hear the sounds from the adjacent hotel bar, so if you're a big Bjork fan looking for a nice space to work out of, this could be worth checking out. Kórsafn will run through the end of the year, so you have plenty of time to listen to what a teamup between AI and Bjork sounds like. If you're not likely to be in New York City before then, you can still check out the soundtrack and watch the rooftop camera's feed on Sister City's website.