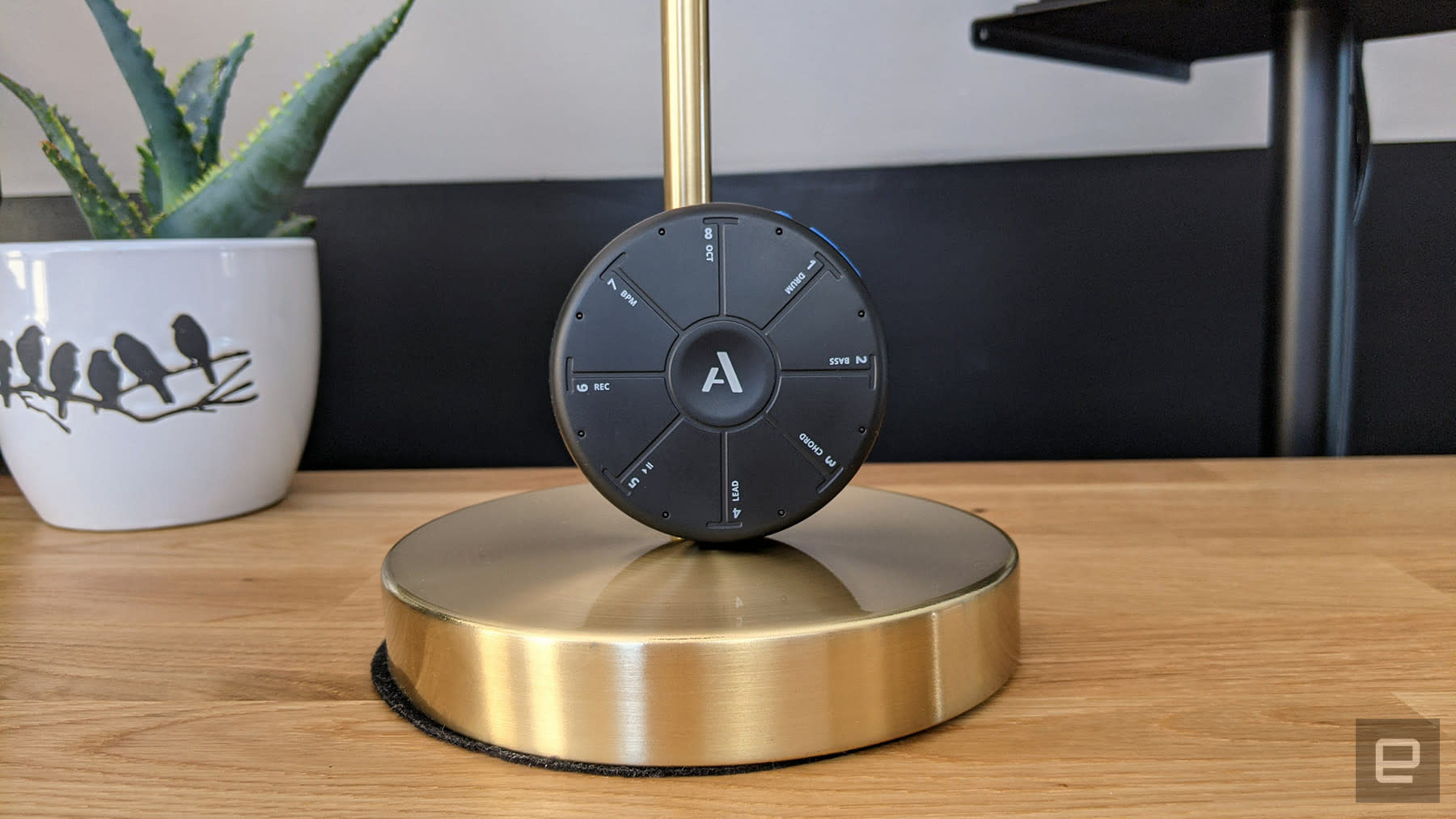 This strange, novice-friendly instrument is also a unique and powerful MIDI controller.

I am both fascinated by and skeptical of strange, nontraditional musical instruments. And it’s this very thing that drew me to Artiphon’s Orba. It’s about as nontraditional as you can get. It’s a tiny synthesizer and looper, and an MPE MIDI controller that looks more like a petrified orange half than any instrument I’ve ever seen. The primary way to play it is by tapping the touch pads on top, but you also can twist it, tilt it, shake it and slap it. But for all of its weirdness, Orba isn’t particularly complicated. In fact, its mission is to lower the barrier to creating music and be as simple as possible.

While you can certainly make Orba complicated by connecting it to a DAW or softsynth, the company is pitching it more like a $99 musical fidget spinner. It sits on your desk waiting for you to have a five-minute break or to get bored with that never-ending Zoom call. And within minutes you can knock out a four-bar loop before going about your day. 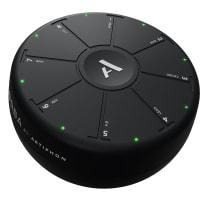 These little creative bursts are the key to appreciating Orba. And, if you’ll allow me to get a little preachy for a second, your spare moments are much better spent doing something creative like making music — even if it’s just for yourself — than mindlessly scrolling through Instagram. Half-heartedly tapping out a melody while you’re trying to figure out a problem at work can actually help you focus on the task at hand. It can even be a way to soothe yourself if you’re having a particularly stressful day -- and as the parent of a three-year old during a pandemic I can tell you, there are nothing but stressful days right now.

So, before we get to the more advanced features of Orba, let’s approach it first as a fidget toy. Which also means I should give you some context about myself. I am notoriously restless. I always have a project. I pace a lot. And I constantly need to be doing something with my hands. Throughout my life this has manifested itself in countless ways: from being that guy who endlessly clicks his pens, to biting my fingernails.

I always have something within reach to satisfy my incessant need to fidget. It’s just that now, that thing is almost always a musical instrument. Often a Teenage Engineering Pocket Operator, or sometimes I’ll just leave Ableton Live open in the background and tap away on my Push when I need to keep my hands occupied.

Orba has easily found a home in that rotation. They all have their strengths and weaknesses as fidget toys: Push and Ableton provide the most pleasing and varied sonic pallet, but it’s easy to end up actively working on music; a Pocket Operator has physically satisfying buttons and knobs, but can be a bit fiddly; Orba is basically idiot-proof, but has a limited sound selection and is less tactile.

If I’m on a really tight deadline, though, that level of immediacy is welcome. I can’t risk getting distracted working on a new song or meticulously trimming samples. And it’s relatively easy to commit all of Orba’s functions to muscle memory — as long as you make sure you have it oriented with pads one and eight at the top. If you’re recording a new loop, the big ‘A’ button in the middle stops recording and starts looping. Pressing it while you’re recording will also cycle through the four instruments: drums, bass, chord and lead. So you can easily record and layer four different instruments without ever actually looking at it. If you hold the A it works as a shift button to surface functions on the pads like play, record, tap tempo and octave select. Though, you’ll definitely want to look and make sure the pads have lit up to indicate it’s registered you’re holding the A. Sometimes I found myself recording stray notes into my loop instead of stopping recording.

Another advantage Orba has over my other musical fidget toys is portability and durability. My Push isn’t going to the park or cafe. And while I often carry my PO-33 with me, it is quite fragile. Orba won’t fit in a pocket, but it’s palm-sized and easily slips into a small bag. The plastic shell has glass fiber embedded in it and has held up for two months in a house with a rowdy three-year-old. Its speaker is also much more powerful than what you’d find in a Pocket Operator. So, while I wouldn’t necessarily recommend jamming out loud at a Starbucks, it should be able to cut through normal background noise.

If you are going to carry Orba around in public, I highly recommend you use the headphone jack on the side. Granted, this takes away from the self-contained appeal, but those around you will probably appreciate not having to listen to your questionable rhythm.

If you want to swap out sounds or save something you’ve been working on there’s a companion app for iOS, Android, Windows and macOS. Right now the song mode is under construction, and the company is ironing out some kinks with connectivity on the Android and iOS versions, but the basic functionality is there. You can choose from 10 drum kits, 10 basses, 12 chord sounds and nine lead instruments. They’re organized into themed packs, but you can mix and match as you wish.

The sounds themselves err towards the more subdued side, which I think speaks to its primary purpose as a casual device. You’re not gonna find moody trap synths or abrasive industrial drums here. Instead, the packs are focused on things like lo-fi hip hop, ambient and bedroom pop. The quality of the sounds can be uneven, but there’s a handful I keep going back to like the “Ambeeant” drums and the Ohm lead tone.

While Orba doesn’t really have any moving parts, there’s something satisfying about how the sounds react to your movements. For instance, that Ohm lead tone responds differently to a quick light strike than it does if you press down and keep your finger there. Holding your finger down deadens the sound, as if it were a physical instrument that you were preventing from ringing out. But if you strike and pull your hand away, the glass-like tone continues to hang in the air for some time. The only one of these interactions that doesn’t really seem to land is the shake. Each drum kit has a shaker on pad eight, but it always feels a tad stilted and off.

That being said, it is these sorts of touches that keep the Orba compelling as a standalone instrument. The chipset inside consumes very little power, so the synth engine built for it is quite lightweight. It’s impressive what Artiphon has managed to do with the resources at their disposal, but the sounds you get aren’t always the most complex or rich. Instead it’s all about how it responds to gentle finger movements by adding vibrato or opening up the filter when you tilt it on its side. That being said, you can definitely coax some pretty epic bass and pads out of it by running it through a few guitar pedals.

Again, though, this is about casual music creation not deep sound design and maximalist pop productions. You’re basically limited to crafting eight-bar loops, with four tracks, within a particular scale, which you can change in the app. Even your choice of scale is fairly restricted. You can pick any root note you wish, but you can only pick between major or minor from there. The lead instrument is even limited to the pentatonic scale in most cases. (The lone exception being the Orba Diatonic lead.) This basically ensures that almost anything you play will sound passable. Perhaps not exciting, but at least not actively bad.

The current selection of soundpacks is a bit thin and there’s currently no plan to open up the synth engine for custom sound design. Instead, the company is focused on ironing out kinks and building tools for users to share their jams. But, that’s not to say you should dismiss the Orba out of hand just because you take music creation seriously.

Orba has an entirely different side to it once you connect it to your DAW or a softsynth. For starters, it is one of, if not the most affordable MPE controller on the market. That opens up a whole world of expressive playing through apps like Arturia’s Pigments (my current favorite softsynth), Bitwig and GarageBand. The company has even built custom sessions for several popular DAWs so that you can quickly explore its features.

Here, the ability to play with subtle vibrato, control the filter on a bass synth by tilting Orba or even conducting a virtual orchestra by waving it through the air can lead you to playing music in ways you might not have considered. If you’re an Ableton user, Artiphon even built a Max for Live app that allows you to easily assign the various motions — tilt, move, shake, bump, radiate, vibrato, spin and press — to different parameters in a synth. Let’s use Pigments for an example of how insane you could make this: You could have two different filters on a sound: one controlled by the tilt of the device, the other by the rotation And as you radiate your finger out toward the edge, it could increase the amount of detune, while shaking it adds vibrato and moving it through the air triggers pitch bends.

Now, not all of these controls play nicely with each other; moving, shaking, tilting and rotating are especially hard to isolate from one another. But, if you pick just one or two, they can help you approach playing in new and creative ways. The Orba is still limited to its scale-tuned pads (there are ways around this in your DAW, but…) so often I end up using it primarily to control filters and other parameters, while actually playing the notes on a keyboard or Push. Obviously, we’re in the midst of a pandemic and concerts aren’t happening right now, but I could also see Orba finding a home on stage as a way to add a sense of physicality to a primarily computer-based performance.

You can also change the mode on Orba from MPE to part-per-channel. This essentially turns it into a four-track MIDI sequencer. So you can control four different instruments, create loops and jam over them using whatever sounds you want. Not just what’s in the app.

All of this is to say that, if you want to push the boundaries of Orba, it’s capable of being a serious musical device. Albeit still an unusual one. Even so, the target audience here isn’t touring musicians or big-name producers. It’s you. The musically curious person with a desk job. You might not have the time to learn the ins and outs of a DAW or to master scales and run drills on a keyboard. But you might have an itch to create. For $99, Orba isn’t a bad deal. It’s simple enough for almost anyone to grasp. It’s pleasantly responsive and satisfying to hold. As long as Artiphon continues to develop new sound packs and add features its novelty shouldn’t wear off.