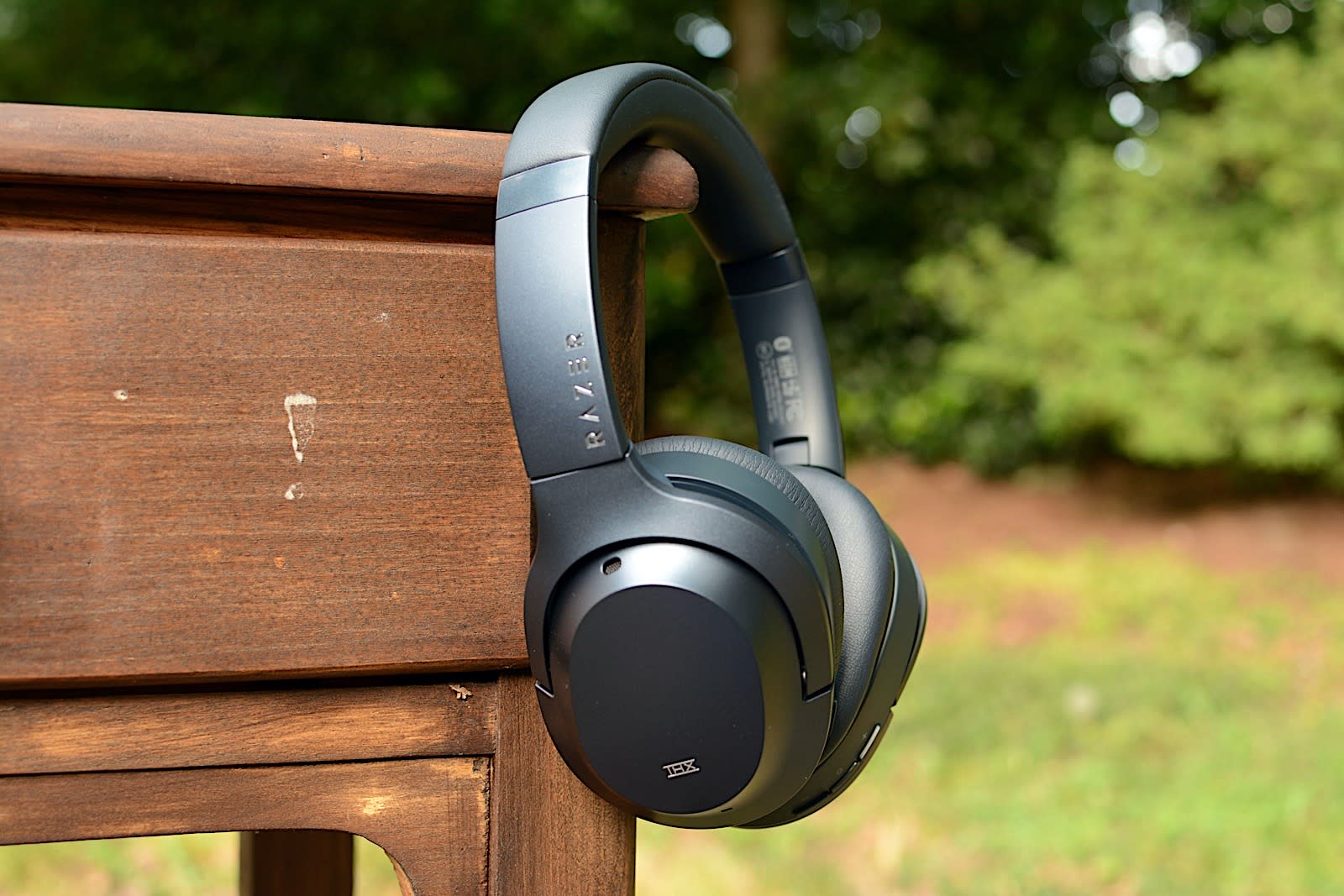 Excellent audio, solid ANC and a comfy fit at a great price.

When you think of Razer, headphones probably aren’t the first thing that comes to mind. Gaming headsets, perhaps, but the company is more synonymous with gaming accessories and peripherals than general-use audio gear. Of course, those headsets can double as headphones, and Razer even has a true wireless model for mobile gamers. Despite that experience, the company hadn’t yet put all the pieces together in a solid set of noise-cancelling headphones. That is ... until now. The Razer Opus ($200) packs in THX-certified sound quality, active noise cancellation (ANC) and other features for much less than your typical flagship headphones. That seems like a great deal, if Razer can deliver on its promises.

The first thing you notice about the Opus is that it doesn’t have the typical Razer color scheme. There’s no black and green here. There’s not even the company’s tri-snake logo. Razer has a tendency to go all in on the branding, so it’s nice to see some restraint. Plus, if you’re looking for a set of all-around headphones, you might not want them to look like you just walked out of a League of Legends tournament. These are solid blue (black is coming soon) with tasteful Razer typography and THX logos on the outside. 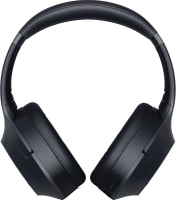 The overall design isn’t overly flashy either. These look like your typical noise-cancelling headphones. They’re mostly plastic with a soft, cushiony leatherette headband and earpads. Semicircle hinges fold flat onto the top of the earcups, similar to those from Sony and others. And the earcups rotate flat, so you can fold the Opus in toward the headband for relatively compact storage. There are physical onboard controls for volume, tracks and voice commands on the right side as well as an ANC and ambient-sound option beside the power button on the left. Thankfully, these all work well, though you have to hold the ANC button to use the ambient sound/Quick Attention mode. That feature automatically pauses whatever you’re listening to so you can briefly tune in to your surroundings.

Speaking of audio, the real star here is the THX-certified sound. This isn’t the first Razer device to offer THX: The Kraken Ultimate gaming headset has spatial audio on board, for example. Still, the Opus had to meet certain standards for distortion and noise isolation in addition to vocal and dialog clarity. In fact, Razer said it had to make numerous component changes during the certification process to earn the THX seal of approval. The result is truly stellar audio quality for a set of $200 headphones.

There’s punchy bass with a depth and clarity you typically don’t find on headphones in this price range. Sony’s Extra Bass line is one exception, but on the whole, sound quality is a key sacrifice when you drop into the $200 range. That’s certainly not the case with the Razer Opus. Purity Ring’s WOMB uses a collection of synths and drum machines to create moody atmosphere and dancy rhythms. The bass lines boom throughout with droning swells and other details some headphones struggle with. Because of the depth of sound and detail the Opus offers, this album is played in stunning clarity. I’d argue Razer does a much better job with this than the Sony WH-XB900N.

It’s not just bass-heavy genres either. Acoustic acts like Watkins Family Hour also sound pristine on the Opus. Guitars, fiddle and other instruments stand on their own — layered rather than compressed. I’ve tested the group’s latest album, Brother Sister, with a few different headphones now, but almost all of them convey the sense of your being in the room while they’re playing. Everything sounds open and airy instead of merely piped into a soundboard for recording. However, that spatial aspect is heightened on the Opus, and you feel even more like you’re in a concert hall or recording studio with killer acoustics.

The Opus does a great job with movies and television as well. Without live music venues open, I’ve been watching a lot of concert footage on YouTube. Again, the spatial aspect of the audio here gives you a better sense of presence for a huge festival like Pol’and’Rock (Gojira’s 2018 performance in particular). With the Opus, the crowd is not a wall of noise. You hear the swells of the applause and distinct chants as they start. Plus the sound from the stage has the obvious distinction of being on a huge PA system for the outdoors. It’s not only live but also unique. Ditto for Netflix’s series Sunderland ’Til I Die, which chronicles the recent struggles of Sunderland Football Club in England. During game footage, you can feel what it was like to be there, with all the chants and jeers. I’m not talking Dolby Atmos or Ambeo-level immersion, but the Opus does put you closer to the action.

To tailor the sound to your preferences, Razer built an Opus companion app for Android and iOS. It’s limited in what you can tweak, but it offers a collection of five audio presets: THX (default), Amplified, Vocal, Enhanced Bass and Enhanced Clarity. During my tests, the THX setting sounded best, though in certain cases I found myself using Amplified as well. I didn’t care for the others, but that’s just me. They all seemed unbalanced in their own way and slightly unpleasant. Honestly, it’s fine, because the default setting is so good. Razer plans to add more functionality to the software in the future, so we should see more options beyond the current presets soon. For now you can see a battery-indicator icon (no percentage), adjust auto-shutoff timing, turn off/on automatic pausing and access a product guide.

In addition to the overall audio quality, the noise-cancelling ability of the Opus is also respectable. Like a lot of other headphone companies, Razer uses a hybrid ANC setup with four noise-cancelling microphones: two on the outside and two on the inside. While I wasn’t able to use these on a flight, which is my go-to test, the Opus did do a decent job blocking out my constantly raucous household. I also used some artificial cabin noise, and these headphones handled it well. Based on what I could set up at home, the ANC isn’t up to the level Bose offers and lacks the automation of Sony’s adaptive sound, but it does well to reduce the racket around you.

When it comes to battery life, Razer promises up to 25 hours with ANC turned on. I was actually able to manage just over 30 hours, so you should have no trouble. The company doesn’t mention any quick-charge features, only that completely replenishing a fully depleted battery will take four hours. That omission isn’t necessarily a dealbreaker, even if it is a standard feature these days. However, it would be nice to be able to rely on an hour of playtime if you only have 10-15 minutes to charge.

For alternatives in the $200 range, I like Sony’s WH-XB900N ($250). These headphones have 30 hours of listening time, powerful bass and solid noise cancellation for well under what you’d pay for flagship models like the WH-1000XM3. Plus, the WH-XB900N works with Sony’s Headphones app for customization. Sony also recently introduced the WH-CH710N ($200), which offers 35 hours of battery life, ANC and a more well-rounded tone. For a non-Sony option, there’s the Sennheiser HD 450BT ($199.95). These won’t wow you with sound like the company’s pricey Momentum 3 Wireless, but the audio is decent and the ANC performance is solid. Plus, the company cut the price to $149.95, which might sway you if you’re looking to save more.

Razer may not be the first company you’d consider when it comes to general-use headphones, but it’s time to change that. The Opus packs a lot of premium features, including immersive THX sound, into a device that’s way more affordable than the competition. The ANC might not be the best, but it works well enough to keep you tuned in when you need to be. If the company can add more customization to its app, the Opus could be even better. These are some of the best-sounding headphones you can buy right now for $200, and the other features make a compelling package that’s easy to recommend.