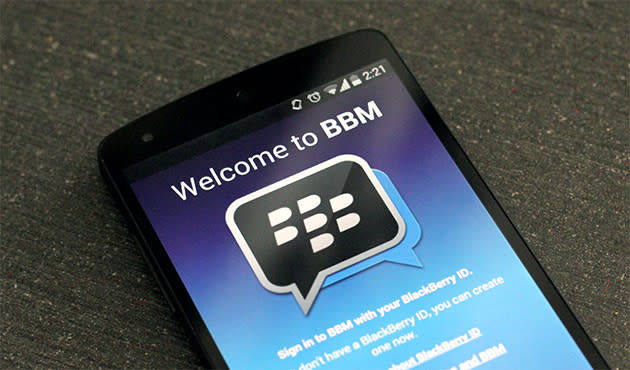 If you see BlackBerry announcing a million or so new users in the next few days, it's not because the company's finally seeing an increase in sales. It's because Alicia Keys' ex-employer has kept its promise to launch BBM for Android 2.3 on Google Play after weeks of beta testing. The previous Android version of the cross-platform messenger only worked on devices running Ice Cream Sandwich (Android 4.0) or higher, but existing users can now reach more of their friends. After all, Gingerbread still powers a large number of Android devices worldwide, since low-cost handsets are especially popular in developing markets. Unfortunately, Windows Phone users still have to sit out BBM convos, but those in Canada can at least demand BlackBerry donuts from friends as consolation.

In this article: android, android2.3, bbm, blackberry, gingerbread
All products recommended by Engadget are selected by our editorial team, independent of our parent company. Some of our stories include affiliate links. If you buy something through one of these links, we may earn an affiliate commission.