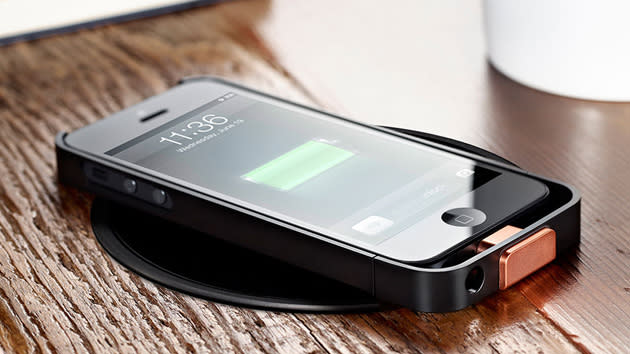 Public wireless charging stations for mobile devices may not have caught on in earnest, but what the heck -- Starbucks is giving it a go. Following a trial run, the coffee giant (and its sister brand Teavana) has started rolling out wireless charging spots that embed Duracell Powermat's PMA technology into counters and tables, letting you top up your compatible mobile devices while you sip from your grande latte. You'll only see these surfaces in shops throughout the San Francisco Bay Area at first, but they should reach other major urban centers (including places in Asia and Europe) within the next year.

Sounds good, doesn't it? Unfortunately, there's a real chance that you'll never use these spots. Despite backers that include the likes of HTC, LG and Samsung, PMA doesn't have as much of a real-world presence as the competing Qi standard. You can't refill well-known phones like the Lumia Icon or Nexus 5 at Starbucks' new spots, and many PMA solutions are just add-on cases for existing gadgets. Duracell Powermat says that it's simply ahead of the curve, much like Starbucks was when it added WiFi in 2001. However, that was also a technology with broad industry support almost from the word "go" -- PMA doesn't have that luxury. The Starbucks move could get more companies supporting PMA (especially with multi-standard chips on the way), but it doesn't represent a surefire hit.

In this article: duracellpowermat, mobilepostcross, pma, powermat, starbucks, teavana, wirelesscharging
All products recommended by Engadget are selected by our editorial team, independent of our parent company. Some of our stories include affiliate links. If you buy something through one of these links, we may earn an affiliate commission.