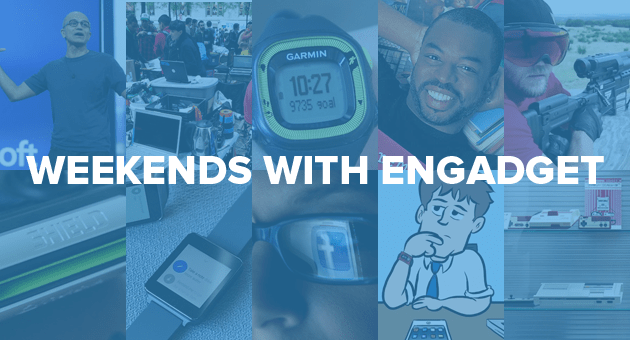 This week, we reviewed Google's Android Wear platform, examined a few practical steps toward ditching social media, watched a sniper hit his target without looking and took a look at the phenomenon of social media activism. Read on for Engadget's news highlights from the last seven days. Oh, and be sure to subscribe to our Flipboard magazine! How to Disappear (almost) Completely: a practical guide

Ever thought of dumping social media for a more private life? In this week's installment of How to Disappear, Dan Cooper discusses some practical first steps toward going completely off the grid. Disclaimer: it's incredibly difficult. You can find part one here. Thanks to Google's unifying Android Wear platform, the smartwatch market is poised to explode. But does this wearable OS have the right combination of user experience and functionality to win the hearts of the masses? Read on as Brad Molen breaks down everything you need to know about Android Wear. Windows 9 will morph to fit the device it's running on

ZDNet's Mary Jo Foley is reporting that Microsoft's next operating system (Windows 9) will ship as a three-in-one of sorts (desktop, tablet and mobile). Codenamed "Threshold," the OS will recognize the hardware it's running on and morph to the occasion. 'Reading Rainbow' is the most popular Kickstarter to date

After reaching over 105,000 backers this week, Reading Rainbow dethroned the original Pebble smartwatch as the most popular Kickstarter project ever. At its close on July 2nd, the endeavor had raised over five times its goal of $1 million. What you need to know about social media activism

What do the "OccupyWallStreet" and "CancelColbert" hashtags have in common? They're both examples of what's been termed "social media activism." Read on as Ben Gilbert dissects this modern form of protest and what it means to you. Smiles are contagious. So are depressing Facebook posts, apparently. In 2012, Zuckerberg and Co. manipulated its users' happiness (gasp) by secretly bombarding their news feeds with waves of positive and negative stories. NVIDIA's Shield successor is a tablet

NVIDIA's next Shield console might not be a "console" at all. According to a listing from the Global Certification Forum, the gaming company mistakenly leaked information about an upcoming "Shield Tablet," including some specs. The forgotten losers of the console wars

More than a few gaming consoles have spawned in the last 40 years, most of which you've probably never heard of. This week, a museum in southern Japan is opening its doors in celebration of 56 those historic (or infamous) consoles. What's scarier than a regular ole' sniper? One who doesn't have to see the target. Armed with a futuristic targeting system and Smith Optics I/O Recon Goggles, this sharpshooter nails a target 500 yards away... while looking in another direction. If you're already an athlete or active jogger, Garmin's new Forerunner 15 might be the fitness accessory you've been looking for. At $170 ($200 with the heart rate monitor), this somewhat bulky device combines the functionality of a sports watch with fitness tracking basics.

In this article: androidwear, forerunner15, garmin, readingrainbow, shield, sniper, social, socialmedia, socialmediaactivism, twr, weekendswithengadget, windows9
All products recommended by Engadget are selected by our editorial team, independent of our parent company. Some of our stories include affiliate links. If you buy something through one of these links, we may earn an affiliate commission.