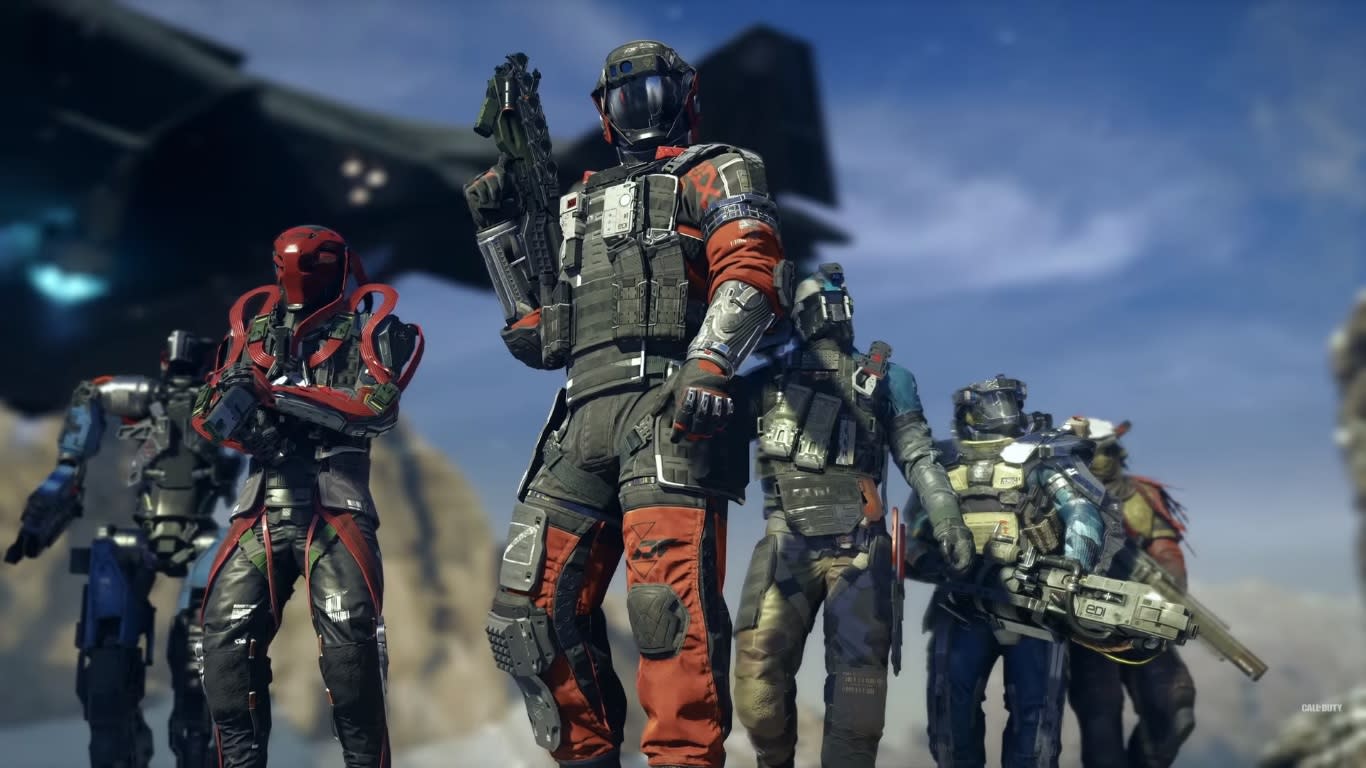 Activision is raising the bar for its annual miniconvention celebrating its Call of Duty shooter franchise, Call of Duty XP. This year's has panels, eSports championships and performances by Snoop Dogg and Wiz Khalifa, but the real attention is on news for the next entry in the franchise, Call of Duty: Infinite Warfare, which launches on November 4th. Here's all the new details of the modern shooter that studio executives shared this afternoon.

Most critically, PS4 players will get first crack at the multiplayer beta on October 14th, with Xbox One to get access at a later date. To refresh player-vs-player combat, developers took a hard look at the customization system of older games and saw players dumping perks to pour points into firearm attachments. To put more emphasis on abilities, Infinite Warfare gets a new system, "rigs," which are basically classes with unique themed active "payloads" and passive "traits." This pushes players into more defined roles, as the rig names suggest: Merc has a bull charge to ram enemies and health regen, while Phantom gets an active cloak and delays hit enemies' damage recovery. Check out the trailer outlining all six below:

The other big addition is a crafting system: Yes, now you'll be able to build better versions of your guns by collecting salvage from playing matches. Weapons now have four levels of rarity, with better perks available to higher-ranked ones. Ergo, your common EBR sniper rifle might have Stockpile for more ammo, the rare version awards bonus score, legendary grants a tactical nuclear strike after a 20-person killstreak and the epic edition marks wounded enemies with a red outline. Players will be be able to build secondary guns, too, but still unexplained is what appeasr to be mid-match gun crafting appearing at the end of the multiplayer trailer above. There's also a new slew of equipment, like a "bio spike" throwing knife that explodes on impact. New killstreaks include the Thor, a hovering drone that rains down missiles a la previous games' Predators, and the RC8 is a heavily armored robot players can call down to watch their backs. If this sounds suspiciously like the titular giant mechs from Titanfall, Infinite Warfare has borrowed a few tropes from its competitors. A new multiplayer mode, Defenders, has teams competing to hold on longest to a Grifball-like score-generating sphere.

That extends to the single-player mode, which the presenter was careful to say had "new mechanics never seen in a Call of Duty before." Some of these new features, like aerospace dogfighting, zero-G fights and grapple hook combat, have appeared in Halo and even the Titanfall 2 beta that dropped in the last few weekends. Infinite Warfare's solo campaign will let players choose missions in any order they wish from their hub on the Retribution base ship — and also claim it will have zero loading screens.

Infinite Warfare brings back the franchise's popular undead horde mode. Pre-ordering the game gets you the delightfully period-themed level Zombies in Spaceland for free, which was announced last month. It's set in the 80s, so expect some multicolored neon windbreakers and zebra leggings to adorn the rotting hordes.

We already knew that PS4 players pre-purchasing Infinite Warfare bundles with Call of Duty: Modern Warfare Remastered would get to play it a month early. Studio officials sweetened the deal by announcing today that it would include 16 redone multiplayer maps. Ten will be available at launch, including "fan favorites" like Crash, Backlot and Crossfire, with six more free ones coming in December. The announcement also included first looks at the fourth DLC for Call of Duty: Black Ops 3. Included are four new period-themed multiplayer maps: a western town in Outlaw, a medieval castle in Citadel, miniaturized combat amid a giant-sized picnic in Micro and the futuristic Rupture. The last part of the content expansion is Day of Reckoning, a level for that game's Zombies mode. Before letting the crowd at Call of Duty XP in Los Angeles zoom off to play Infinite Warfare demos or paintball in a life-size Nuketown, the studio revealed one more local experience: a custom VR space dogfighting experience called Jackal Assault. PS4 players get the game free on launch day, though they'll obviously need PlayStation VR to enjoy it. (If you're green with FOMO, you can go on Twitch to remotely fire a paintball turret at the fans lucky enough to be on-location.) Lastly, Activision-Blizzard shared news that its Call of Duty Endowment has gotten 25,000 US military veterans gainfully employed, and is aiming for 50,000 by 2019. Well done.

In this article: av, CallOfDuty, callofdutyinfinitewarfare, FirstPersonShooter, gaming, infinitewarfare, jackalassault, multiplayer, playstationvr, psvr, vr
All products recommended by Engadget are selected by our editorial team, independent of our parent company. Some of our stories include affiliate links. If you buy something through one of these links, we may earn an affiliate commission.