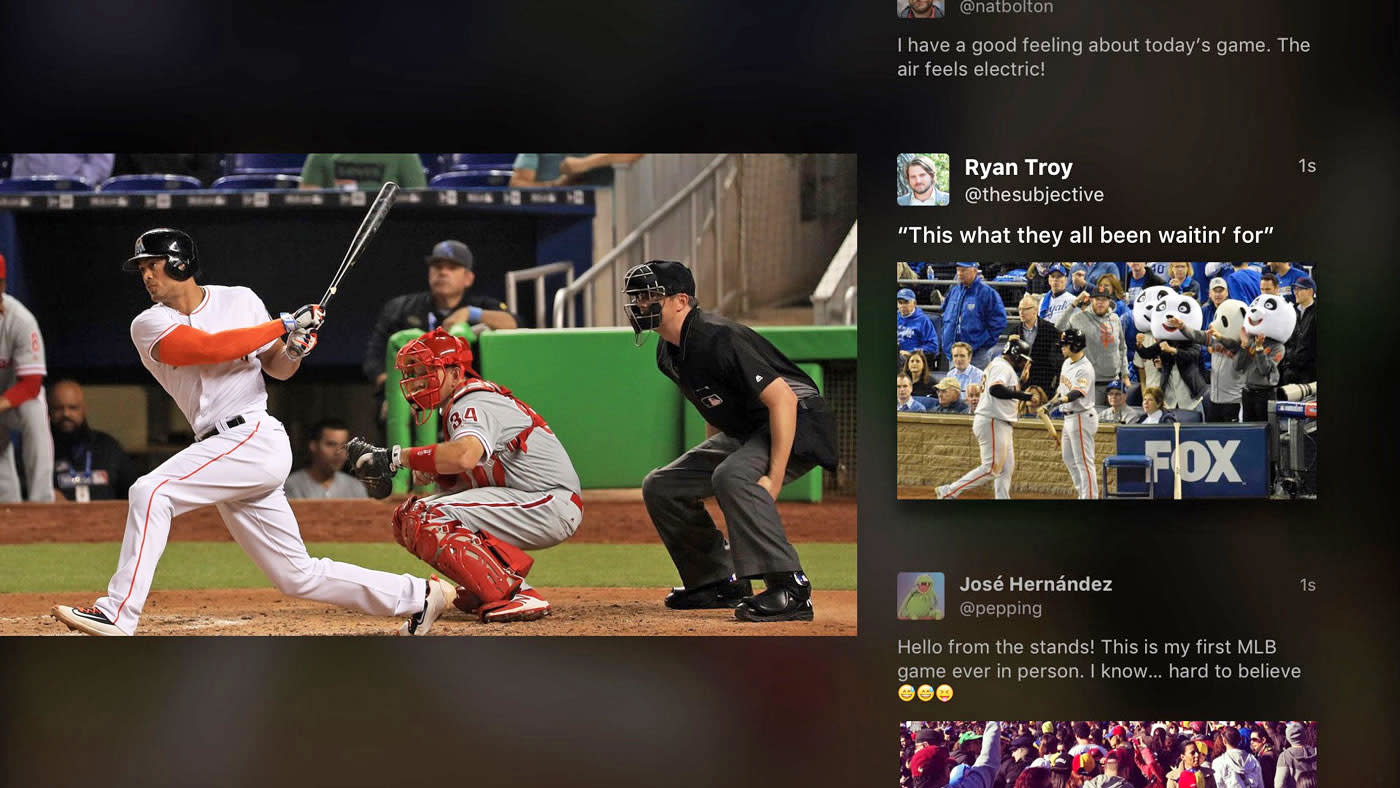 Much like Shia LaBoeuf declaring that he isn't famous anymore, Twitter is now out and proud about not being a social network. No, instead, Twitter is now a broadcasting platform, which means that it needs to put itself in the sort of places you use to watch TV. That's why the company has announced that it's launching apps for Apple TV, Amazon's Fire TV and Microsoft's Xbox One. It'll be on these that you can watch some of the new video content that's coming to the service, including Thursday Night Football.

Twitter isn't just for NFL nuts, and has signed deals with other sports outfits including MLB Advanced Media and Pac-12, which covers college sports. If you're more into current affairs, then you'll be able to view footage from Bloomberg News and tech/finance/video for millennials startup Cheddar -- which does two shows a day from the floor of the NYSE. Twitter's ace up its sleeve is that it also has video platforms of its own: Vine for edited comedy clips and Periscope for live events.

In addition, those using the app on Apple TV will be entitled to have Twitter's video clip service running alongside. Since highlight clips would be embedded in relevant tweets, you could select an edited replay to watch during a lull in the action on the main screen. What's more valuable is that Twitter will offer-up a commentary overlay from members of the public that'll run alongside live events. Company CFO Anthony Noto is quoted as saying that "Twitter has always been a great complement to TV, and now fans can enjoy even more premium video with live Tweets."

Back in the day, there was an online service called Zeebox that took Twitter's social component and used it exclusively for adding commentary to live TV. Twitter (and broadcasters) would eventually cotton onto the same idea, turning the service into a real-world peanut gallery that went alongside big name reality shows. But being the most beautifully created peanut gallery doesn't earn you much money -- which is why Zeebox transformed into a beauty blog called Beamly and then became a marketing agency.

Twitter needs to get more eyeballs pointing at its product, because it's got something of a user growth problem. It has a core audience of passionate tweeters, but that appeal hasn't translated across to the broader mainstream. Its monthly active user count has remained roughly stable at just over 300 million, putting it well behind services like Snapchat, Instagram and Facebook. Wall street has often punished Twitter for not being as popular as its rivals, even though Twitter's cult appeal deserves preserving.

Live video, especially sports video, could be the magic bullet that Twitter needs both to invigorate its user base and broaden its appeal. It's not the only tech firm that's come to this conclusion, with Amazon reportedly ramping up its interest in bringing sports to Prime. Twitter will also have to fight with Facebook, which considered buying those same Thursday Night Football rights and is also making forays into live sports. Unlike those other companies, however, Twitter doesn't have a huge war chest that could be used to buy such rights. But given that the big networks can earn up to 21 million viewers for a single game, it may be worth the risk.

Of course, Shia LaBoeuf's still famous and Twitter's still a social network, albeit one which is attempting to be many different things to different people. That's why, in addition to making a big push into broadcast video, it's encouraging people to come to Periscope with notifications and turning DMs into a WhatsApp-esque chat service. The company is also hoping to make some sort of progress in counting its toxic atmosphere through algorithmic-based abuse removal.

The new apps are launching today, with each platform offering a slightly different global footprint. Twitter for Apple TV is launching wherever you can purchase the device, while the Fire TV edition is only available in the US and UK. If you're a rocking an Xbox One, you'll be able to get at the goodies in the US, UK, Australia, Brazil and Mexico.

In this article: amazon, AmazonFire, apple, AppleTV, culture, entertainment, FireTV, gaming, gear, internet, LiveVideo, microsoft, NFL, Sports, Twitter, Video, XboxOne
All products recommended by Engadget are selected by our editorial team, independent of our parent company. Some of our stories include affiliate links. If you buy something through one of these links, we may earn an affiliate commission.