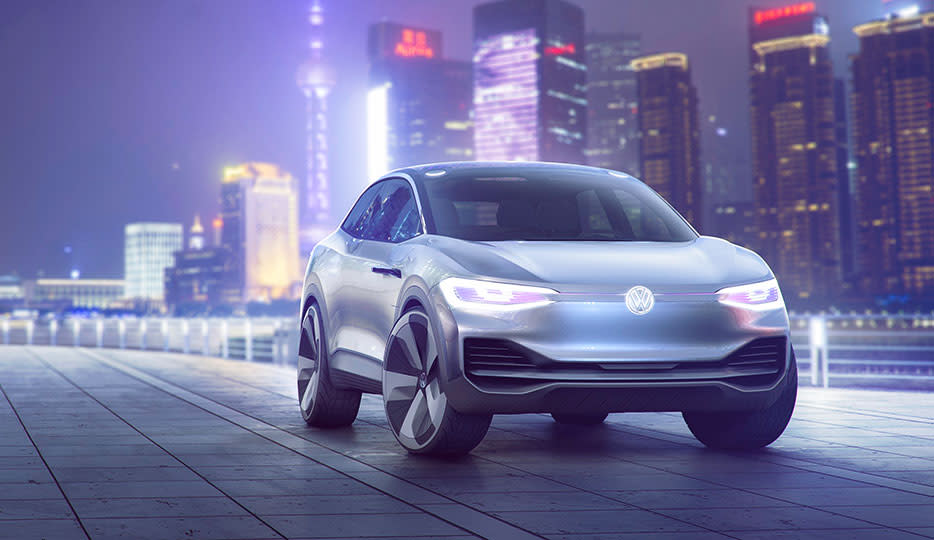 Volkswagen first showed off its next-gen ID platform at the Paris Auto Show last year with a concept car for where it sees electric vehicles going. Now the embattled automaker has debuted the ID Crozz, an all-electric crossover utility vehicle (get it?) VW hopes will help the company reach its goal of selling a million EVs a year by 2025.

"The ID Crozz was conceptualized as a sporty, interactively designed zero-emission all-rounder -- with electric all-wheel drive that is equally impressive in the urban environment as it is on the tracks of an active lifestyle," according to a flowery press release. Maybe the most impressive aspect isn't how fast it goes or its battery life (more on those in a second), but that instrument cluster functions are delivered via an augmented reality projection. Then there's the "newly developed light shade" that uses gestures to control incoming light from the panoramic sunroof.

The statement goes on to say that the vehicle has 225 kilowatts of power and can go 500 kilometers (around 311 miles) on a single charge. The Chevy Bolt, a much smaller vehicle, is rated at 238 miles for range and we managed to get around 216 during our review, so maybe do't get your hopes up in this regard. For a more direct comparison, we got 250 miles between charges with the Tesla Model X which was rated at 289 miles per-charge.

Speaking of power, a quick charge will bring its floor-mounted battery up to 80 percent within a half an hour. Top speed is rated for 180 KPH (nearly 112 MPH). The Crozz isn't scheduled for production until 2020, but, if you're jonesing for an electric crossover before then, there's always the Model X.

In this article: augmentedreality, conceptcar, crozz, dumbnames, electricvehicle, ev, gear, id, suv, TL17CCAR, transportation, volkswagen, volkswagenid
All products recommended by Engadget are selected by our editorial team, independent of our parent company. Some of our stories include affiliate links. If you buy something through one of these links, we may earn an affiliate commission.