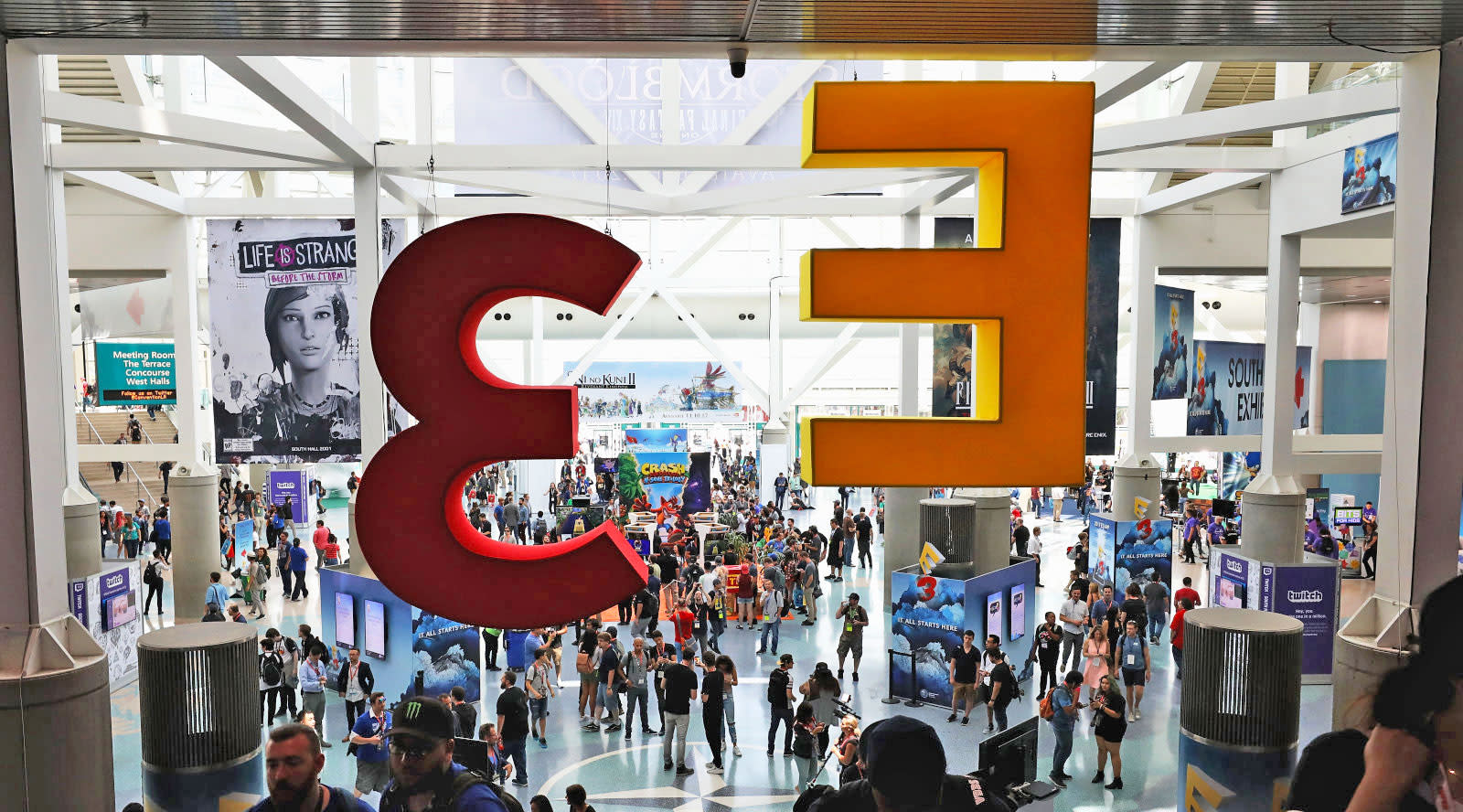 These are the games we can't wait to try out at home.

Now that our editors have escaped the confines of the LA Convention Center, it's time to reflect on what we saw at E3 2017. More than ever, there was something for everyone, and some of us couldn't pick just one "best" game. Whether you were at the show or at home, hopefully there's at least a single game that made you circle its release date on your calendar -- here are the ones we're waiting for. Beyond Good & Evil 2 was a game I had given up on. Ubisoft and series creator Michel Ancel had insisted the sequel was still in development, but I didn't believe them. Beyond that glorious reveal trailer from 2008, there was little evidence to show that the project was still alive. For years, I tuned into Ubisoft's E3 press conference in the hopes that something, anything, related to Beyond Good & Evil would be announced. Eventually, I just accepted it was dead. Clearly, the game was too ambitious, or too expensive and risky, for a publisher like Ubisoft to back.

But then I was proved wrong. Ubisoft took me by surprise and re-revealed Beyond Good & Evil 2 with a gorgeous CG trailer at this year's convention. The tone was different, the vision altered, but I didn't care. The game was real, and there was Ancel on stage, thanking the crowd and fighting back tears. It was a magical moment, the kind that every E3 promises but rarely delivers. Of course, there's every chance the game will be canceled or reworked again to hit a release date. But for now, I have hope again. And that's enough. I had three favorite games coming out of this E3: Wolfenstein II: The New Colossus, Metronomicon: Slay the Dance Floor and Agents of Mayhem. While a big-budget first-person shooter, an RPG/rhythm game hybrid and a cel-shaded super-anti-hero simulator may be very disparate games, the common thread is that they defy expectations.

Wolfenstein explores the concept of fragile masculinity in what's typically a genre driven by an overdose of testosterone. Not only that, it toys with the idea of a video game protagonist's service record catching up with him -- something Halo developer 343 Industries could learn from.

Rhythm games were a fleeting obsession of mine, and if Rock Band 4's sales are any indication, they were for a lot of people. Metronomicon's fundamentals are impeccable, but it's the way the title marries role-playing elements like character classes and spell-casting to the beat-matching that really sold me. Oh, and that music.

I've waited 10 years for a proper sequel to Crackdown (let's not talk about 2010's Crackdown 2). What I played of Crackdown 3 left me feeling flat Monday, but getting 30 minutes with Agents of Mayhem made me ridiculously excited. Mayhem takes Crackdown's cartoony superhero skeleton and grafts an actual game on to it, with a metric ton of personality to spare. I have a lot more to say about it but know this: Buying Agents of Mayhem on August 15th will save you $60 when Crackdown 3 is released November 7th. I didn't stray too far from the Engadget stage this year (sidenote: Engadget had a stage this year), but turns out I didn't have to in order to find a completely unexpected, joyful game -- with a creepy twist, just the way I like it. Duck Season warps the classic Nintendo Entertainment System title Duck Hunt into a virtual-reality, 3D game set in 1988, complete with a real-life gray-and-orange blaster that actually works like a shotgun, thanks to the HTC Vive Tracker and a motion controller.

Not only does Duck Season play into NES nostalgia in a beautiful way, it tells a brand-new story: Your actions have consequences. There are seven different endings, some of which involve the classic laughing dog turning out to be a serial killer. This prospect is made all the more frightening considering, in Duck Season, the dog looks more like a Five Nights at Freddy's character than a lovable, furry companion. Plus, it's all in full-scale VR.

Duck Season represents an overall trend of this year's E3: VR has certainly found its place in the industry, and independent experiences on the platform are becoming increasingly polished and wonderfully surprising. I haven't cared about a Madden game in years. Don't get me wrong: I love football, but these games mostly just felt like the same thing -- wash, rinse, repeat. For Madden 18 though, EA brought the popular sports franchise over to its Frostbite engine and added a story mode known as Longshot. And it looks fantastic.

The pieces of the "Longshot" story I saw at E3 were enough to hook me, especially since there's no longer an NCAA Football franchise to look forward to each year. Sure, you don't get to play as college-era Devin Wade, but you do get a feel for high school football in Texas and more events that lead up to an NFL scouting combine. If "Longshot" can do for Madden what "The Journey" did for FIFA last year, EA could draw a lot of people back to the gridiron.

The other game that really caught my eye at E3 was Call of Duty: WWII. The last game in the franchise, Infinite Warfare, wasn't my cup of tea, but going back to the franchise's roots in historical conflicts may win me back. The pieces I've seen so far look like vintage Call of Duty with all the tricks today's games allow. It also gives a bit of a nod to Left 4 Dead, with healing system based on health packs (first-aid kits) and more reliance on your fellow troops. Again, I've only seen a glimpse, but it was enough to persuade me to step onto the beaches of Normandy this fall. It's inevitable. When I return home from E3 each year, somebody asks me what the best thing I saw was. It seems like a simple subjective question, but it's almost impossible to answer. E3 is a show that overflows with amazing news -- and choosing a single "best" from all of them is a task I just can't manage. Press me, and the obvious answer comes to mind: Nintendo's Super Mario Odyssey is a gorgeous (if weird-looking) open-ended exploration game primed to end the Switch's first year in style, and the company's promise to make not just a new Pokémon game, but two new Metroid titles, has guaranteed me a future filled with my favorite Nintendo franchises. It's going to be a good year.

If we measure by what surprised me, however -- it's going to be Star Wars: Battlefront II. The first game had all the aesthetics of George Lucas' space opera, but none of its epic story. It felt like the backdrop of a play with no actors on the stage. The sequel, on the other hand, seems to be finally raising the curtain on EA's Star Wars narrative. With an epic story that follows the trials of a soldier raised in the dogma of Empire propaganda, it has the potential to be the first Star Wars game in a decade to deliver on what I love about the franchise in the first place. Plus, the improved flying mechanics, epic space battles and beautifully authentic game world look pretty rad, too. I'm getting far too excited about Beyond Good and Evil 2 -- despite the fact that it really only has a thematic, spiritual connection to the 2003 original. The scale of the game and the vision look incredible: I'm just waiting to see how it all bears out in the end. More immediate gaming treats for me centered on Nintendo. Super Mario Odyssey is already shaping up to be the Switch's next hit game, while Skyrim for Nintendo's hybrid console is a future gaming time-sink that's also landing soon. Established franchises and sequels were a mixed bag: I was hoping for a reimagined Assassin's Creed but saw more of the same, just in Egypt, while Far Cry 5 was incredibly fun to play even in its early demo, reinvigorated with your squad of allies. And a dog. After seeing plenty of hyped-up, big budget games at E3, I was surprised to find that the one that resonated with me the most was a debut title from a small independent studio. And it stars a mouse with a sword. Moss, from ex-Bungie developer Polyarc Studios, is a PlayStation VR adventure game that harks back to The Legend of Zelda and Secret of Mana. But it brings everything we loved about those adventure games to the modern age with luscious VR environments.

Moss doesn't reinvent the wheel, but it has the look and feel of an instant classic. The game's mouse heroine, Quill, is both adorable and badass. Its combat and puzzles feel fresh while learning all the right lessons from what came before. It's a VR adventure I can't wait to take. Sometimes I'm so predictable. Even though I had a chance to play some super-interesting games at E3 2017, like the indie beat-'em-up Aztez, my favorite one of the show was FIFA 18. That's not to say EA's massively popular title isn't interesting, but it is still just about football at the end of the day. And I guess that's why I love it. This year, EA is bringing back one of my favorite features: "The Journey," a story mode that was introduced in FIFA 17 and lets you pretend you're living the life of a professional soccer player. Beyond that, the game continues to look more real than ever, while the match gameplay has been slowed down to feel more realistic. Most important though: Cristiano Ronaldo is FIFA 18's cover star, which gives me the excuse I need to have a picture of him in my household — even if it'll be tucked away somewhere in my entertainment center. After playing a bit of Forza Motorsport 7, Project Cars 2, Gran Turismo Sport and F1 2017 (I didn't manage to get my hands on Need for Speed), I'm just happy that one of my favorite genres had such strong representation at E3. This will be a great year for racing games, but ultimately none of those are the game I'm most excited about.

Although it wasn't playable on the show floor, the short Anthem preview carefully ticked off a list of everything I'd always wanted to see in Destiny -- after I peeled away the stilted "gamer chat" that played over the preview. It will be a while before we find out if the team from BioWare can deliver on the promises made (Bungie's Destiny and Ubisoft's The Division both arrived with some degree of downgrades from what players originally expected), but oh, how sweet it looks. Action that takes place on land, in the air and underwater; a base city that actually feels alive and gives some hint of what the players are supposed to be protecting; and graphics that are a cut above are an awesome combination.

The preview video hinted at a properly modernized multiplayer setup that made it easy for teammates to drop in. Execution across multiple platforms could be tricky, but if BioWare can pull it off, then Anthem could turn out to be the game I imagined while I was playing Destiny (and the one I'd hoped to see in Destiny 2.)