Comics are big business in Japan, but here in the West, Japanese and American titles alike tend to get overshadowed by movies, television and video games. In fact, many of those programs might even be adaptations of popular comic titles. For its first big VR project, Square Enix's Advanced Technology Division is putting the spotlight back on manga. But it isn't just about taking these stories and pasting them into a headset. Due for release in 2018 on all major VR platforms, Project Hikari aims to capture the look and feel of reading a manga while taking advantage of the immersive nature of VR to let the viewer delve deeper into these worlds.

Square Enix is best known for console role-playing games like Final Fantasy and Dragon Quest. But it has also been a manga publisher for several decades now, putting out popular titles like Soul Eater, Black Butler and Fullmetal Alchemist. When the team first encountered the Oculus dev kit back in 2013, project lead Kaei Sou says they were inspired to do something more story-focused than the usual VR fare, as well as something unique to Square Enix. The company's large back catalog of manga gave them that opportunity.

For Project Hikari's first outing, the team chose Tales of Wedding Rings, a lesser-known title from the company's oeuvre. The idea was that working on something more high profile like Fullmetal Alchemist would draw criticism from fans if they didn't like how it looked or if something was left out. But while the creator of Tales of Wedding Rings has been giving the Advanced Technology Division some feedback and art assistance as it develops the project, he's been mostly hands off, though apparently pleased with the results. Instead of a fully interactive experience where you wander around a virtual space and click on things that interest you, Project Hikari is focused on feeding you the story. That means there are stretches where you're looking at panels floating in front of you, dialogue and all. It's similar to other attempts to translate comics into VR, with images floating in a simulated space. But the Square Enix team has also added spoken dialogue, sound effects and music.

Square Enix is hardly the first to try to meld comics with other media. Marvel has been experimenting with concepts like motion comics and adaptive audio for decades. And then there's popular webcomic Homestuck, which incorporates various multimedia and interactive elements over its thousands of pages of story. 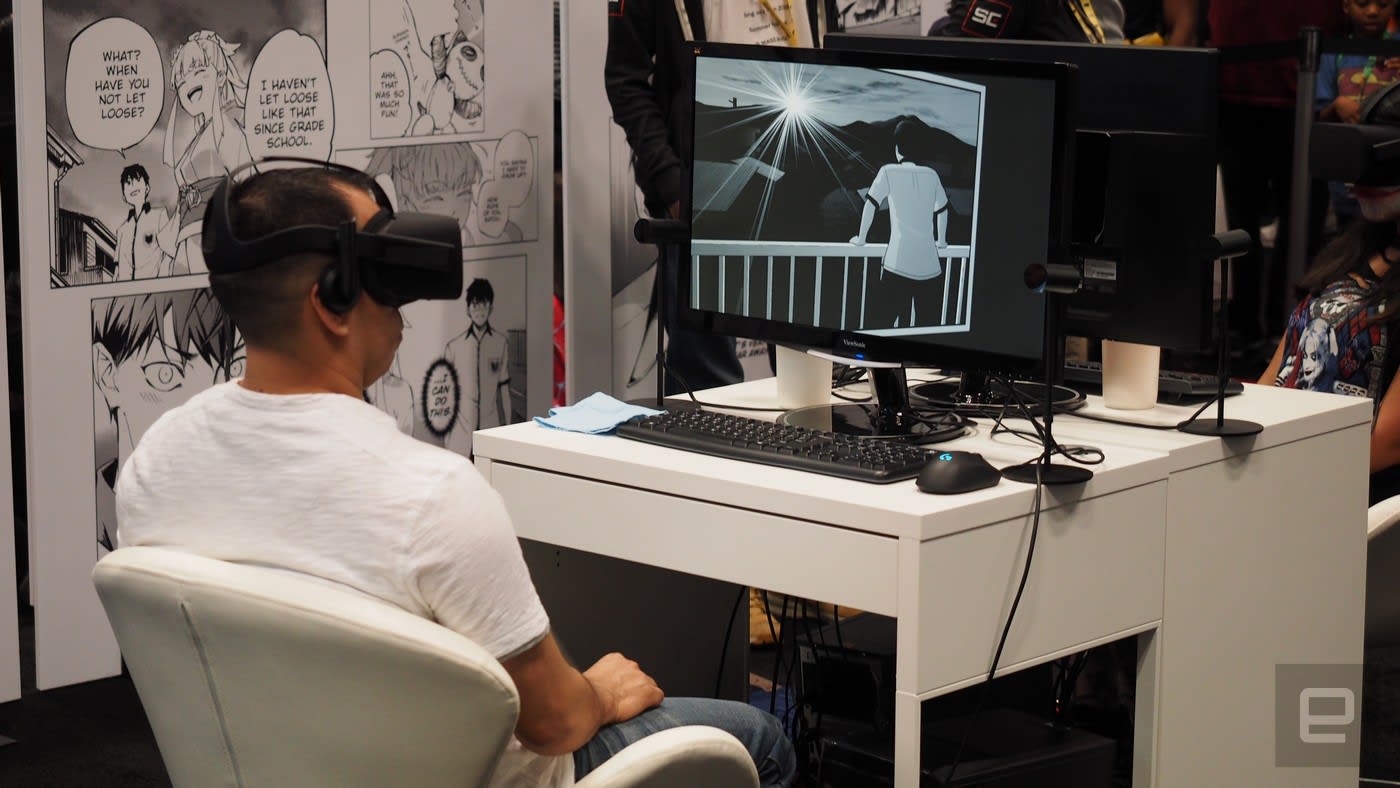 Where Project Hikari differs is how it incorporates animation. For companies like Marvel, calling something a motion comic was a way to cover up the fact that it was essentially a cheap cartoon, with limited motion and reused backgrounds akin to an old Hanna Barbera show. But Project Hikari aims for realistic 3D animation, something that looks smooth and natural from every angle.

One of the team's biggest challenges has been taking 2D drawings and reconceptualizing them for the virtual space. Artists may need to take a lot of shortcuts or distort their character designs in order to get them to look the right way on the page. It doesn't matter if something isn't anatomically accurate, as long as it looks fine in the finished drawing. But when transferred into a 3D space, the flaws in the images become obvious, with things like overly long limbs and crooked facial features seeming downright horrific. So the character designers have had to rework the character models, making sure protagonists Satou and Hime look well-proportioned and detailed while still maintaining the distinct look of manga. It's not unlike how the Disney short Paperman is computer animated but still carries many visual markers of hand-drawn animation. The artists on Project Hikari pay a lot of attention to line thickness and shading, aiming for the natural, somewhat imperfect look of ink on paper. But they still need to give it some 3D shadowing to give the characters weight in the eyes of the viewers who will end up standing next to them.

The animation right now is done through motion capture. That means although it looks fluid and natural, it's impractical in the long run. The eventual goal, which the company will work toward with later chapters, is to fully animate the story from scratch on a computer.

The characters aren't the only thing the team has had to build out though. Even if Project Hikari heavily leans on its floating-comic-panel structure, it still takes advantage of the immersiveness of VR by dropping you into fully rendered environments from time to time. For example, during my demo at this past weekend's New York Comic Con I saw the inside of Satou's apartment first as a comic panel, but then it slowly opened up to surround me so that it felt like I was standing inside the room. I could look out the window at the town and forest beyond, even though the original comic panel only faced the door. 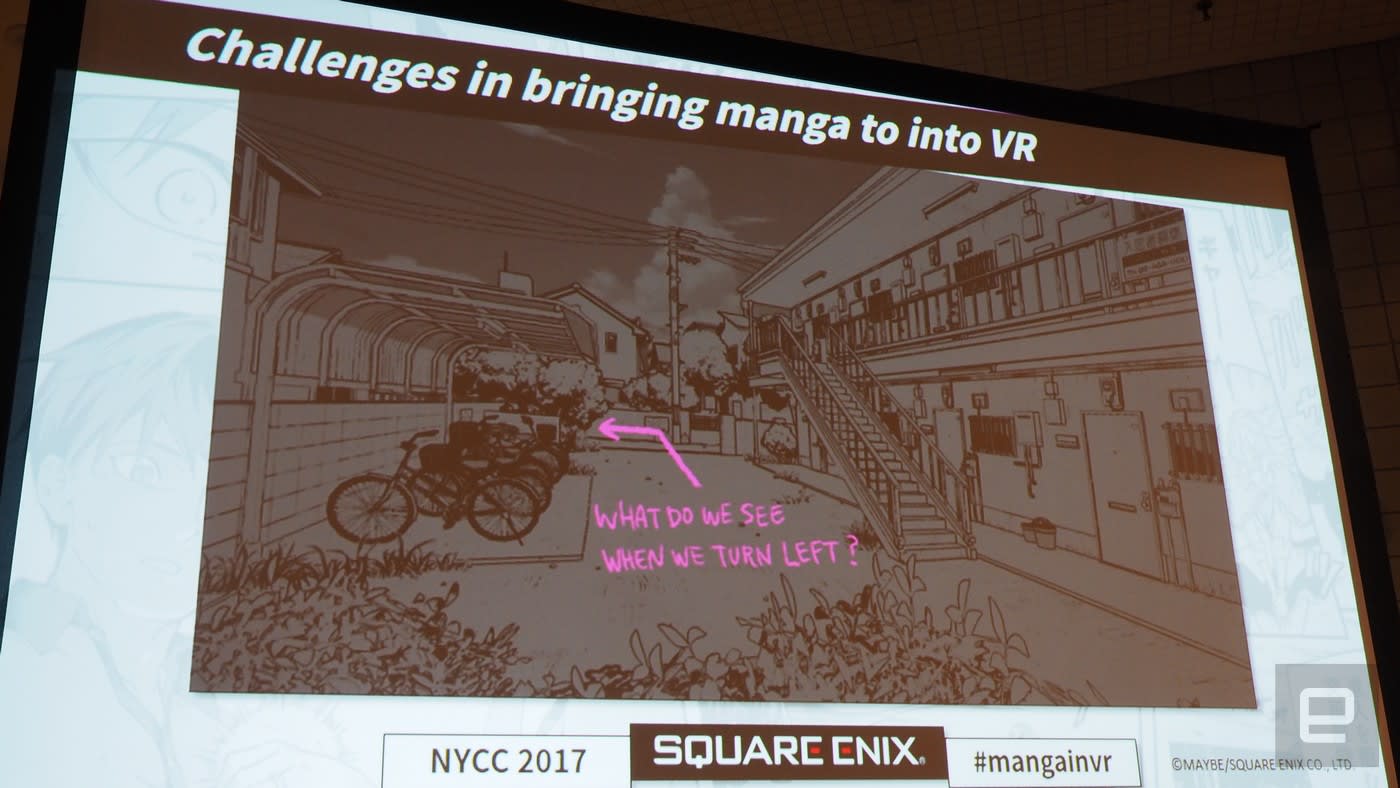 One of the challenges Square Enix's environment artists face in recreating the world is figuring out what lies beyond the comic panels. They can glean clues from the manga's content. In a later scene from the same chapter Satou does look out that window, so they can extrapolate what it would have looked like in the earlier part of the story. But other places, like the alley behind Satou and Hime's apartment complex, don't get as much panel time, forcing the artists to come up with their own designs.

But with all this work into creating a full 3D world, how is this adaptation of Tales of Wedding Rings still a manga? It goes a lot further than Marvel's experiments with sound and motion, and at times it very much falls into the "walking simulator" genre of video games, where you poke around an unfamiliar environment to uncover bits of story. 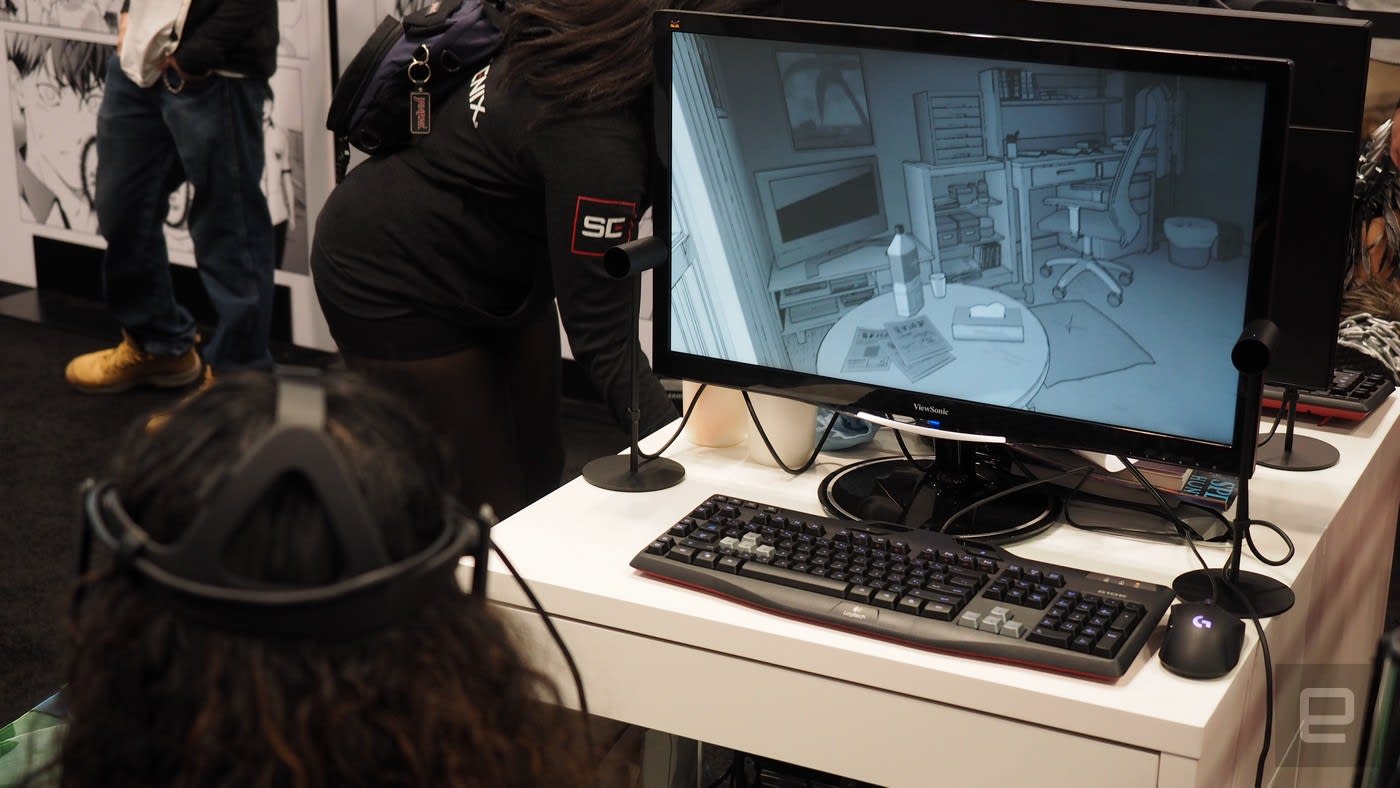 One thing about Project Hikari is that it's more strictly regimented. The New York Comic Con demo had all interactivity removed in the name of expediency, keeping it as short as possible to ensure that more attendees could try it. But the interactive elements planned are more about making it a better reading experience: The team wants to add the ability to skip to or rewind parts of the story and to slow down or pause the action so players can look around more. The most gamelike addition will be interactive objects that can be clicked on to reveal more about the story, though these additional bits of the experience won't be required for finishing each chapter.

The other thing that makes it more mangalike is how the story transitions between sections. Individual scenes are often separated by panels, with the viewer's focus shifting from one to the next and something even sliding or stepping through them to reveal the next scene. This keeps the comic book feel to it but also has a huge side benefit: It's really good at reducing VR sickness. That disconnect you often get between what your eyes are seeing and your lack of movement doesn't happen in Project Hikari because your viewpoint isn't being dragged around from place to place. I'm prone to motion sickness, and I'm happy to report I didn't feel ill once during the 11-minute demo. Manga is supposed to be relaxing, so making the viewer as comfortable as possible is key to Project Hikari. In fact, the Advanced Technology Division might have succeeded already, as several people who tried it asked if they could lie down during the demo, since that's how they usually read manga at home. But still, one of the things many people enjoy about reading manga is the portability of it, and that's sort of lost when transferred to VR. You not only lose the ability to curl up on your bed but also can't throw it in your bag and read it on the subway. But Square Enix isn't looking to replace manga any more than an anime replaces the work it's based on. Project Hikari is just another way to experience it.