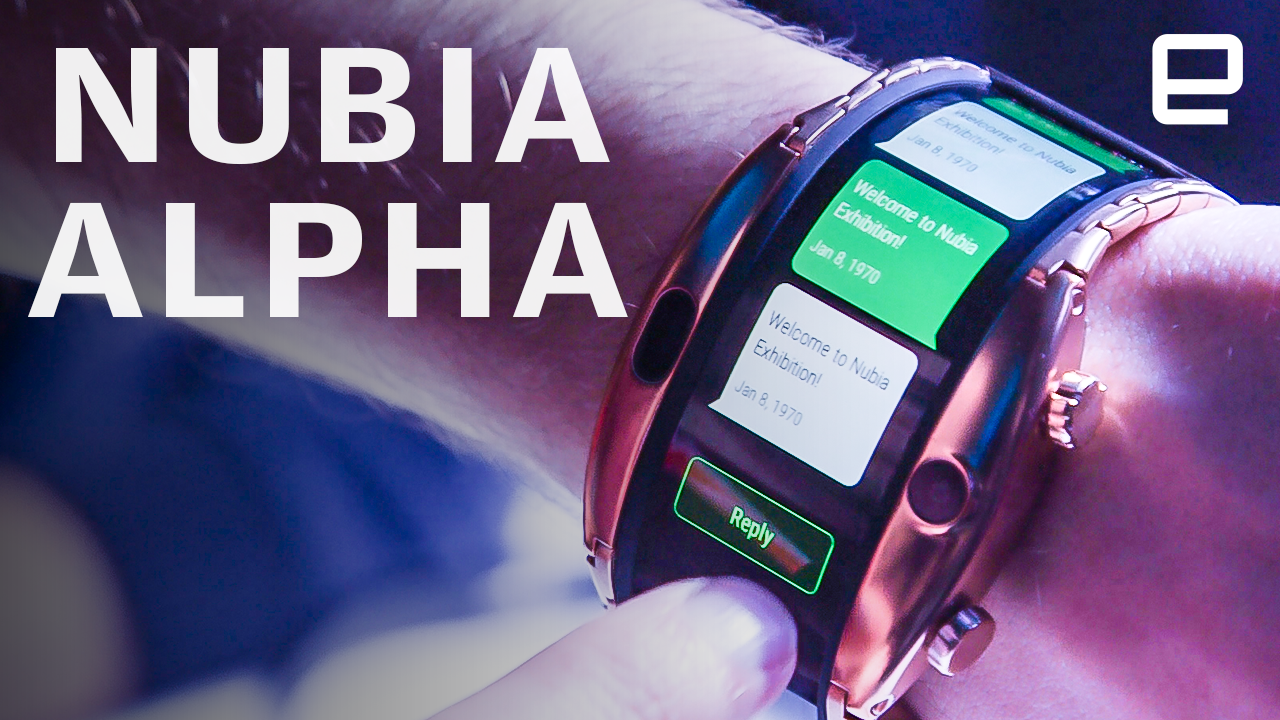 Flexible displays are everywhere at MWC this year. But almost every company is using them in the same way -- to build phones that seamlessly switch between a clamshell and small tablet. Nubia, meanwhile, is doing something completely different with the technology. It's building a wearable 'smartphone' with a narrow screen that wraps around your wrist.

The Alpha isn't new, though. We first clapped eyes on the device at IFA 2018. Nobody was allowed to touch it, though, and we weren't really sure what it was capable of. Now, in Barcelona, the company is ready to share its basic specs and functionality. The four-inch, 960x192 OLED display is being manufactured by Visionox, a flexible screen specialist. The company says it's the "largest wearable flexible screen in the industry" and is protected by a strong, heat-resistant polymer called Polyimide. The entire device is also water-resistant, though we weren't able to test that today.

The device runs on Qualcomm's Snapdragon Wear 2100 chipset, an old piece of hardware that was finally replaced by the Wear 3100 last year. You'll also find 1GB of RAM, 8GB of internal storage and a 500mAH battery under the hood, which Nubia says should last between one and two days on a single charge. The wearable has Bluetooth, WiFi and 4G eSIM support, meaning you can theoretically text, call and browse the web without a conventional smartphone nearby. There's even a 5-megapixel camera if you want to shoot some unflattering selfies or awkwardly-framed videos.

But wait, there's more! The Alpha also doubles as a fitness tracker with basic sleep, exercise and heart rate monitoring. All of these features will be accessible from a "custom-made wearable OS" that supports voice commands, multi-touch and finnicky air gestures. "All of your information is perfectly organized and within reach. Infinitely customizable, intuitive, and visually striking, our new wearable OS is a whole new way to interact with what you care about most," the company boasted in a press release.

The Alpha looks and sounds like a Frankenstein machine. It will be sold in three different versions: a black, Bluetooth-only model for €449 (roughly $510 USD), a black 4G eSim variant for €549 (roughly $623 USD) and a 4G eSim alternative coated in 18-karat gold for €649 (roughly $737 USD). At least one of these models will have a staggered release worldwide in 2019.

In this article: gear, mobile, mwc 2019, mwc2019, nubia, nubia alpha, wearables
All products recommended by Engadget are selected by our editorial team, independent of our parent company. Some of our stories include affiliate links. If you buy something through one of these links, we may earn an affiliate commission.