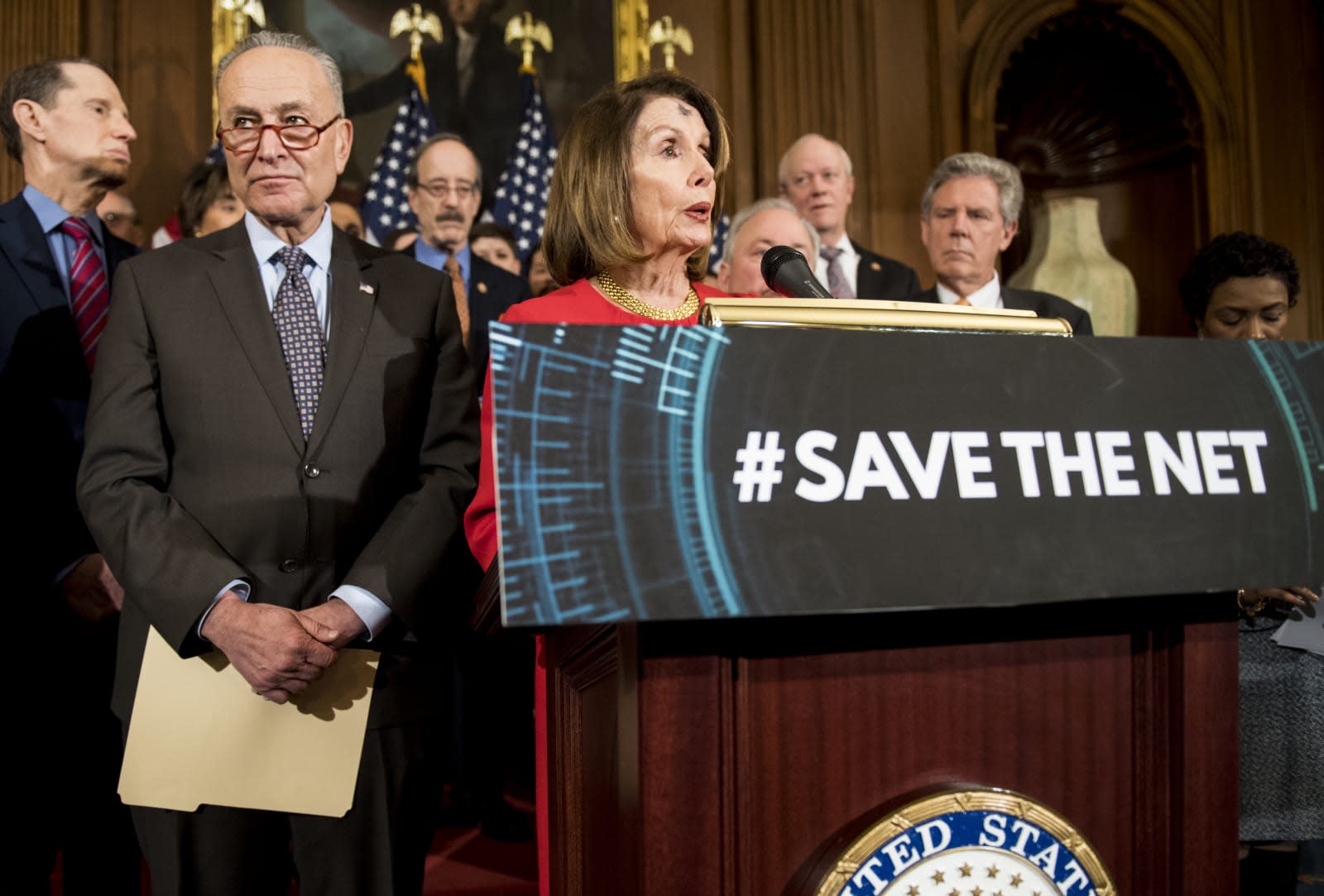 Democrats have revealed a bill that aims to restore net neutrality rules. Speaker Nancy Pelosi and Senate Minority Leader Chuck Schumer were among the senators and congresspeople who announced the Save the Internet Act Wednesday. It's being introduced in both the House and the Senate and aims to codify the previous protections in law. Schumer called it a "real bipartisan effort," and hearings on the legislation are set to begin next week.

Here's the Save The Internet Act of 2019 that nearly every Senate Democrat joined me in introducing today. 3 pages that will restore #NetNeutrality. Let's pass it and make the internet free and open again. #SaveTheNet pic.twitter.com/BCYtcmcMe3

The Obama administration established net neutrality regulations in 2015, which prevented internet service providers from throttling, blocking or prioritizing internet content, and redefined broadband service as a public utility. The Federal Communications Commission repealed the protections in 2017.

The Save the Internet Act, which seeks to nullify the FCC's ruling, has support from a number of senators, though Democrats face an uphill battle in their attempt to pass it into law. They hold sway over the House, but they'll need to push the legislation through the Republican-controlled Senate and will require President Donald Trump' to give it the green light.

While several Republicans have expressed support for a form of net neutrality legislation, some have accused previous bills of being partisan or insufficient. Several states have passed their own net neutrality laws, while some governors have demanded ISPs maintain the original rules if they want to receive state contracts. Several attorneys general have also appealed against the FCC's decision.

"The American people have demanded a free and open internet and I am pleased that Congress has responded with today's legislation," FCC commissioner Geoffrey Starks said in a statement. "I continue to believe that the FCC's 2015 Net Neutrality rules were the right approach and the bill introduced today takes us back in that direction—a direction that will empower the FCC to keep the internet open as a gateway to opportunity for students, job seekers, consumers, creators, and businesses."

In this article: democrats, fcc, federal communications commission, gear, house, internet, nancy pelosi, net neutrality, open internet, politics, senate
All products recommended by Engadget are selected by our editorial team, independent of our parent company. Some of our stories include affiliate links. If you buy something through one of these links, we may earn an affiliate commission.