Flirt with Satan, but not your best friend, in emo adventure 'Afterparty'

You can flirt with Satan in Afterparty. In the coming narrative-adventure game from Night School Studio, the Prince of Darkness is hosting a rager on the outskirts of hell's waiting room, a city where fresh corpses are processed before being shipped off for an eternity of torture. There's a standing challenge for anyone who passes through: If you can outdrink Satan, you get to return to Earth. So, lifelong yet mysteriously deceased best friends, Lola and Milo, try to infiltrate Satan's party, accept his bet and, in the process of trying to drink more than Lucifer himself, they can even see if he's down to clown.

Lola and Milo, however, don't flirt with each other. They're the ideal pairing for a '90s rom-com -- lifelong best friends coming of age amid loving, antagonistic banter -- but that's not their story. No matter how close they are as friends, a lustful, romantic relationship between Lola and Milo would simply feel wrong, Night School co-founder Sean Krankel told Engadget. 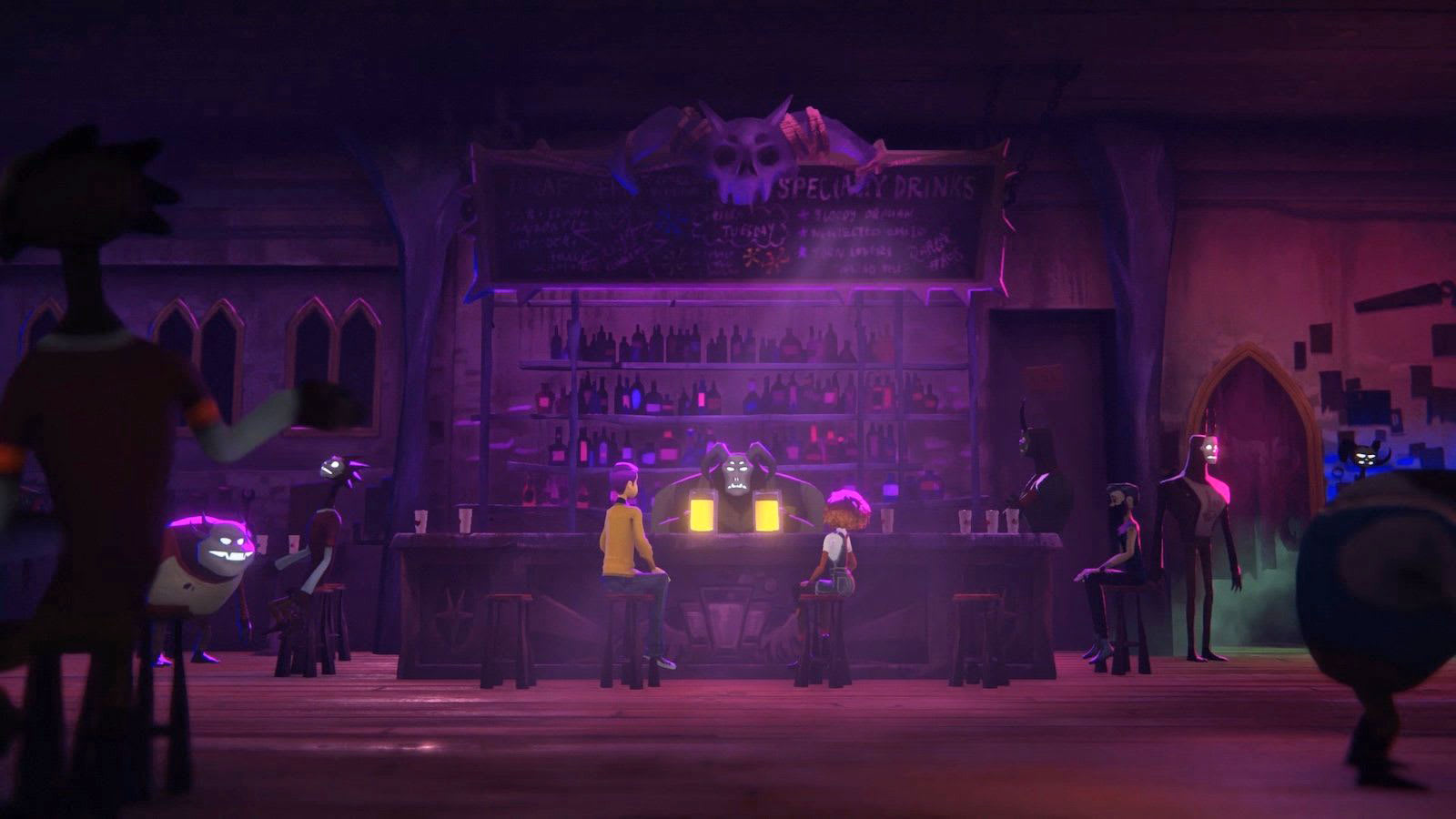 "It feels forced and it would be weird," he said. "These two characters, as we developed them, we were like, why, why, why? They're more like brother and sister. They're just really good friends. Now, you can flirt with Satan if you want, you can flirt with other people. But we don't want to mix them up."

Afterparty is due to hit Xbox One, PlayStation 4, Switch and the Epic Games Store this year and it's the second full title from Night School, the independent California team behind the award-winning 2016 game Oxenfree. Though it featured a cast of teenagers and supernatural overtones, Oxenfree was lauded for its emotion-soaked story and ability to deftly handle heavy themes. Part of its success stemmed from the dialogue system, which ditched cutscenes in favor of an approach that didn't interrupt gameplay, with possible responses and questions appearing in bubbles above the main character's head as she interacted with the environment.

Afterparty builds on this dialogue system, using the same 2.5D perspective and integrated speech bubbles -- but this time around, you get to play as two characters, Milo and Lola. And these protagonists are older than the teenagers of Oxenfree; they're 22. 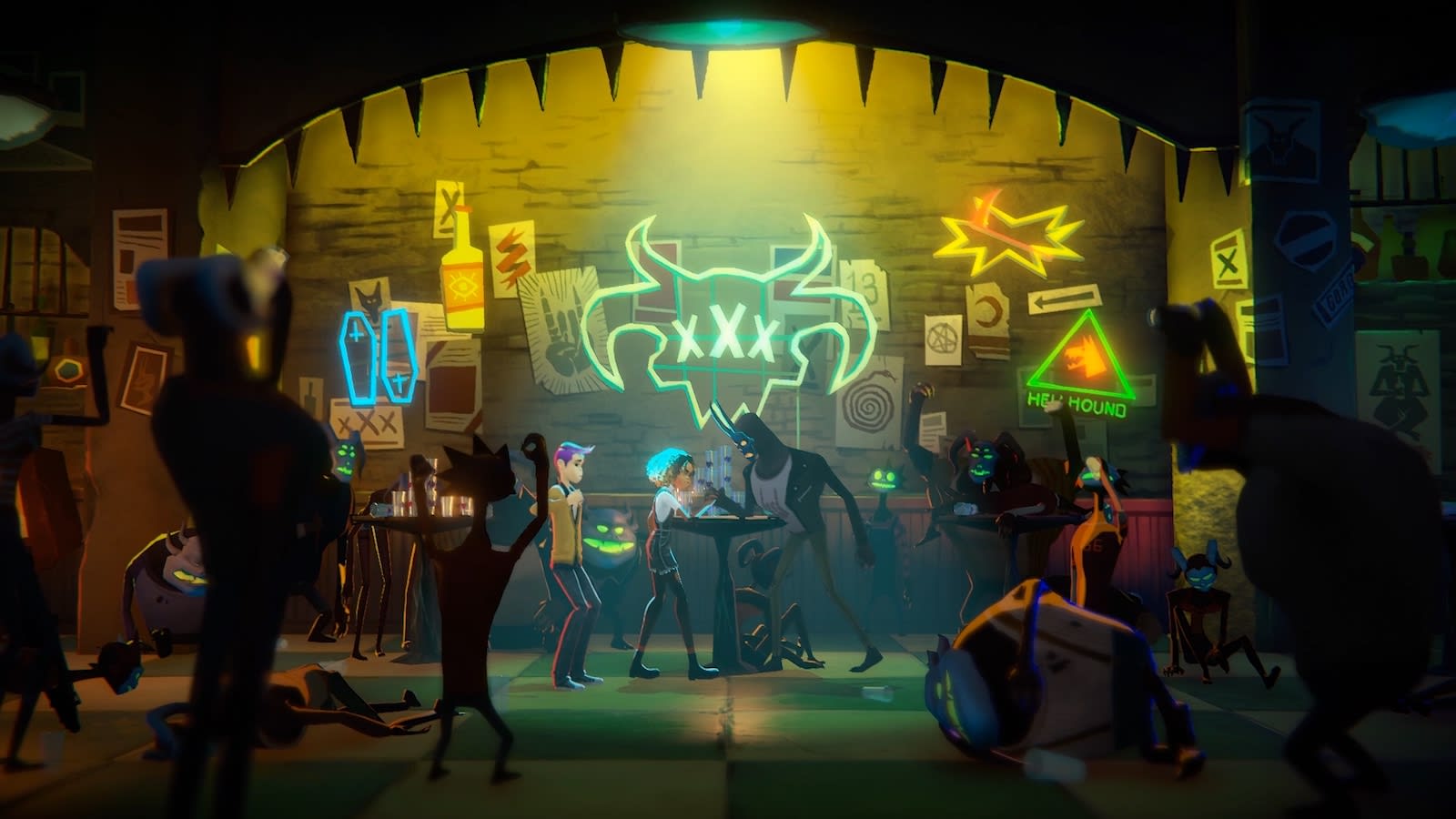 Before Milo and Lola died, they were preparing to leave college behind and enter the professional world. Afterparty is filled with youthful bravado, optimism and sarcasm, just like Oxenfree, but the jokes are a little more mature, coming a mile a minute in the GDC 2019 demo.

This doesn't mean Afterparty is all sex puns and morbid humor.

"People don't think this has an emotional core to it, but it totally does," Krankel said. "The thing we don't talk about in the press that much is that the game is about the nature of friendship. The ups and downs of that, and managing what it is like to be in a long-term relationship with somebody, and how maybe you backstab them and stuff."

Krankel teased this underlying narrative a handful of times, hinting at a tension that grows between Milo and Lola as they relive moments of their friendship and learn things that were perhaps best left unknown. By giving players control of both characters, Afterparty is able to build up Milo and Lola's friendship and then delicately tear it down as they traverse the bars of Nowhere, the most remote island of hell. 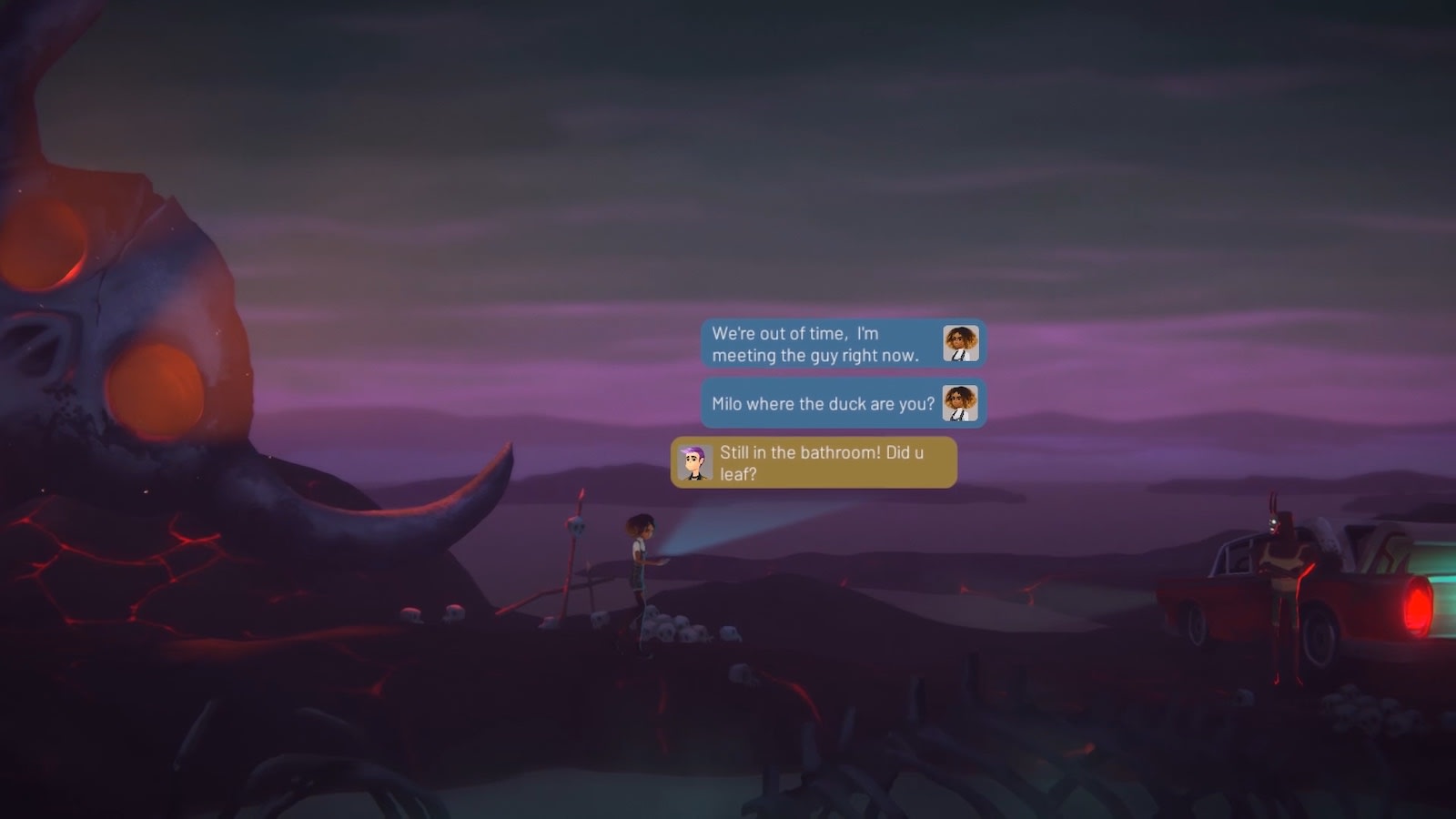 "In the beginning they're fairly symbiotic, and then there's a lot of challenges that happen that kind of start to pull them apart," Krankel said. For example, he continued, Milo and Lola are provided a demon, Sister Mary Wormhorn, to help them navigate the city, and she's able to show them elements of their past.

"You might be walking out of a bar thinking you completed a quest, and you walk out the front door and you actually get teleported into a psychedelic recreation of Milo's 6-year-old birthday," Krankel said. "Like really crazy shit that digs into the aspects of their friendship. And things that, you know, what do friends do that they think is in the best interest for another friend, but in some ways they lied to them in the past? A lot of that we kind of tease on."

There are two parallel narratives in Afterparty: one where Milo and Lola are focused on drinking their way back to life, and another where they're dealing with betrayal, lifelong lies and a fracturing friendship. Basically, it's hell.

"On the surface it's just a fun romp through hell that's very non-linear, and players determine how they get through it," Krankel said. "But by the end of it, we hope people get misty." 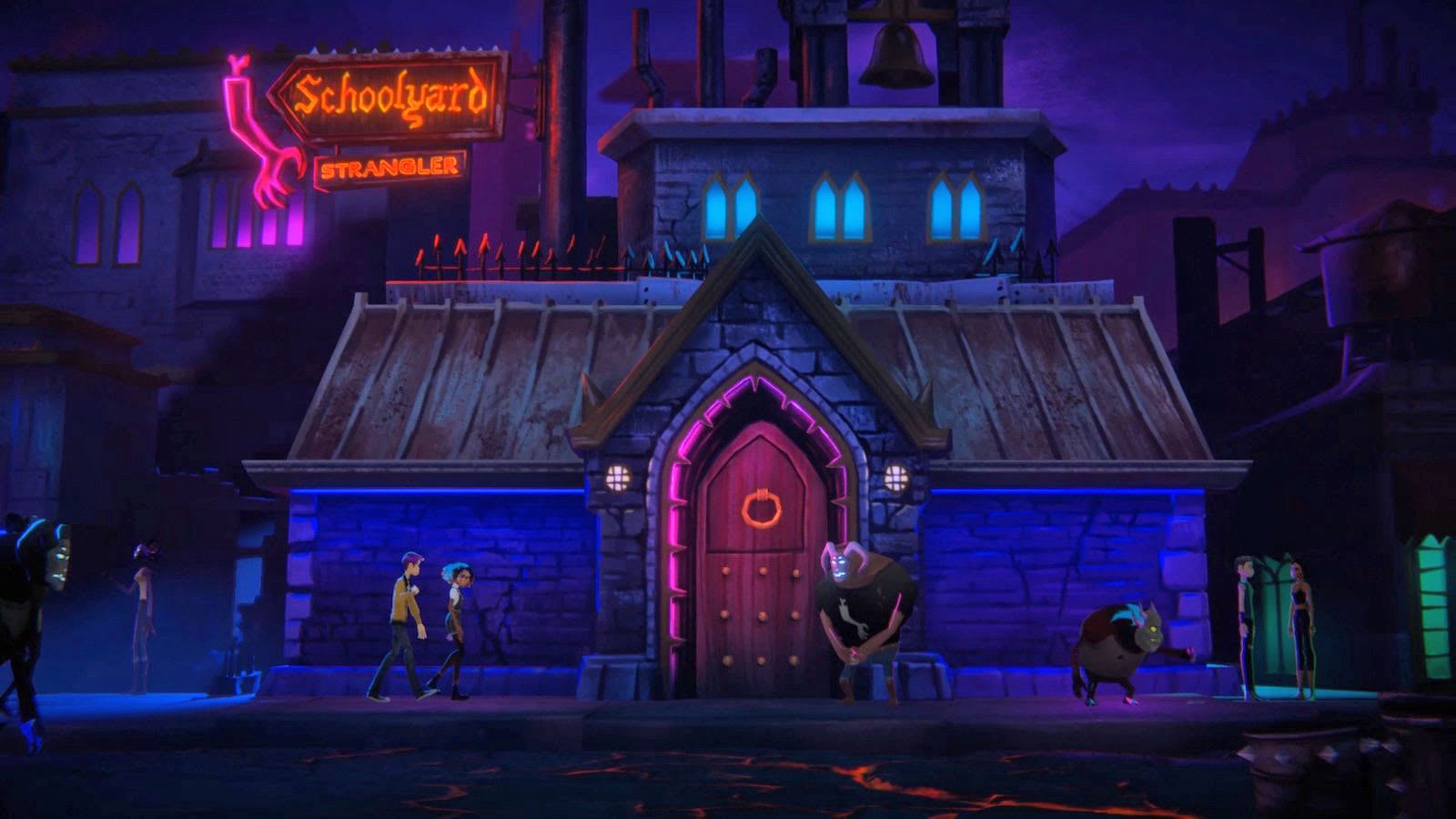 Night School has proven its prowess in heart-wrenching game design. After the success of Oxenfree in 2016, doors opened for the studio. Publishers reached out about future projects and Krankel, studio co-founder Adam Hines and the rest of the team started dreaming big.

"We were talking about building a much, much larger game than Oxenfree," Krankel said. "And we got to the point that we were like, we just want to control our stuff as much as possible. It's not like we're anti-publisher, it's just more like we know that Oxenfree wouldn't have thrived in an environment where our small group wasn't making every decision, from the story all the way through how we market it and stuff. And so for Afterparty, we tried to be really careful in our risks."

Afterparty is a clear evolution of Night School's aesthetic and its approach to business. The game is developed, published and marketed in-house, and it builds on a solid narrative and mechanical foundation laid out by Oxenfree. Plus, the project has attracted renowned voice actors including Ashly Burch (Aloy, Horizon Zero Dawn), Janina Gavankar (Iden Versio, Star Wars: Battlefront II) and Dave Fennoy (Lee Everett, The Walking Dead). 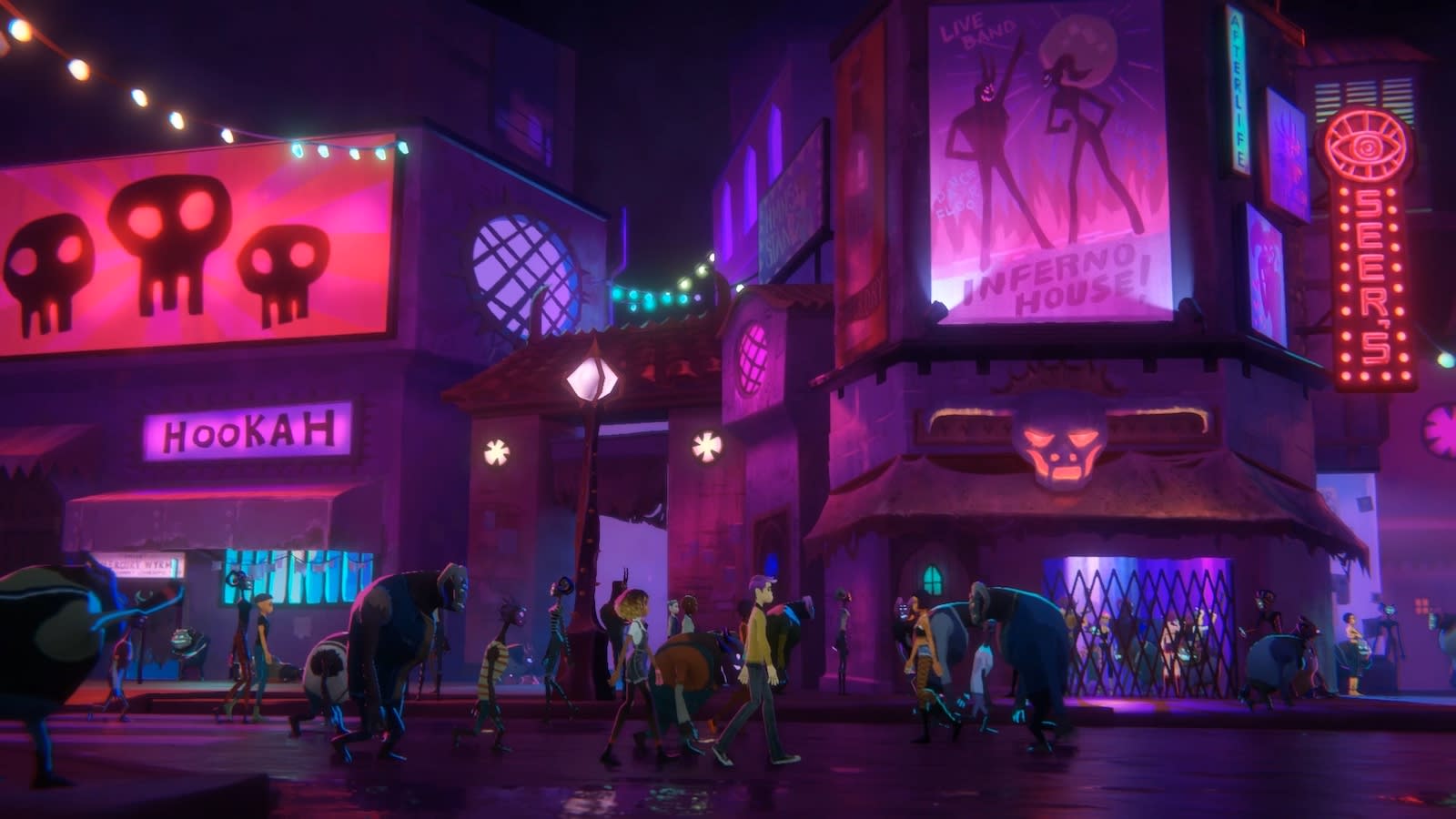 Without a publisher and with plenty of self-generated momentum, Krankel and co. are free to think about the things that matter, like making Lola and Milo's relationship as true and as powerful as possible.

"It's something that was in Oxenfree, too," Krankel said. "Just like, how do you showcase history with people, but in a way that the player doesn't feel left out? How do you surface it and make some of it feel very specific to them, but other aspects just be very universal? So like, specific aspects of their lives we want to surface through why they're in Hell in the first place -- which we have not told people -- and stuff like that. But the broader strokes of this type of relationship, a lot of people can relate to."