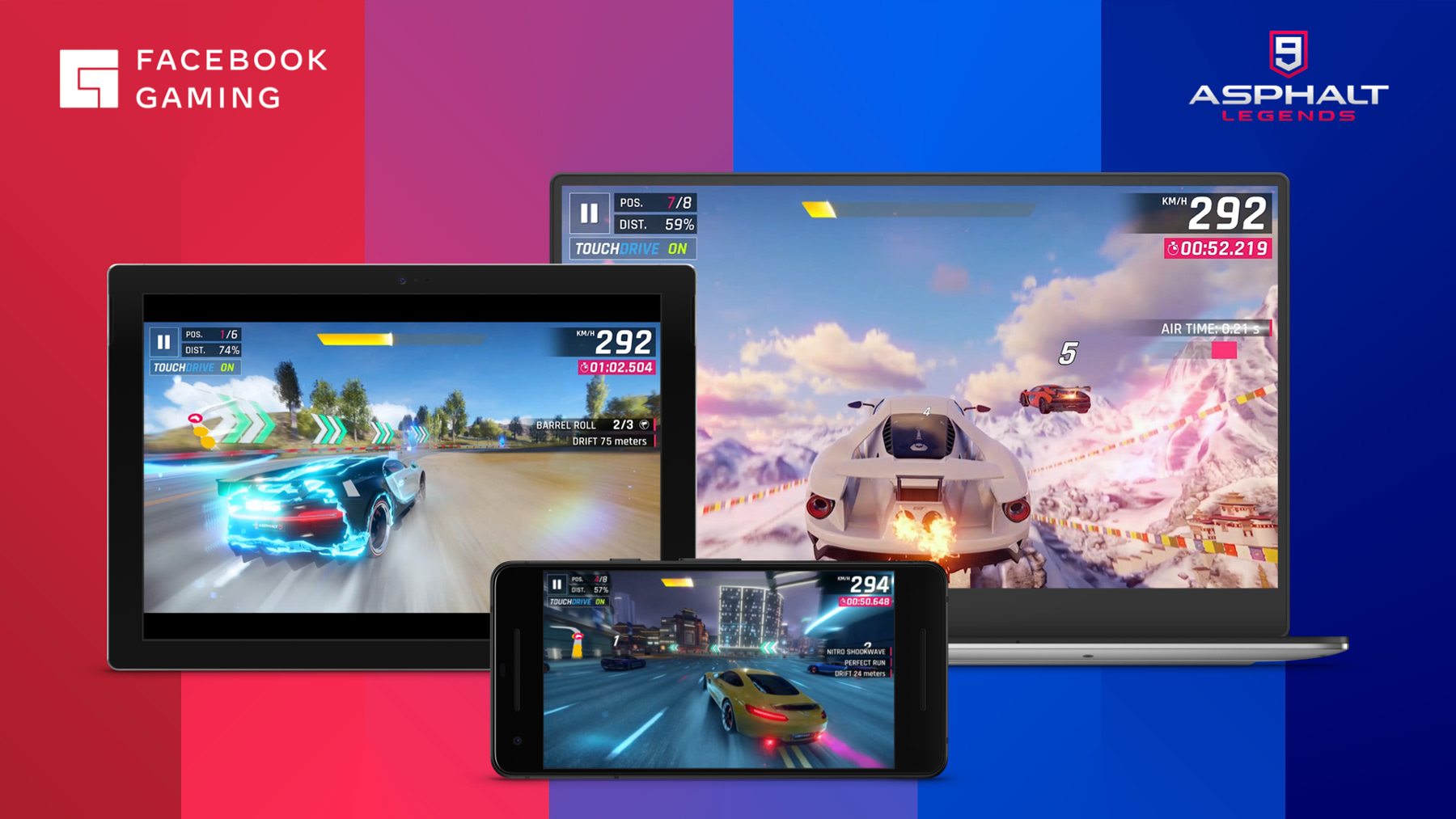 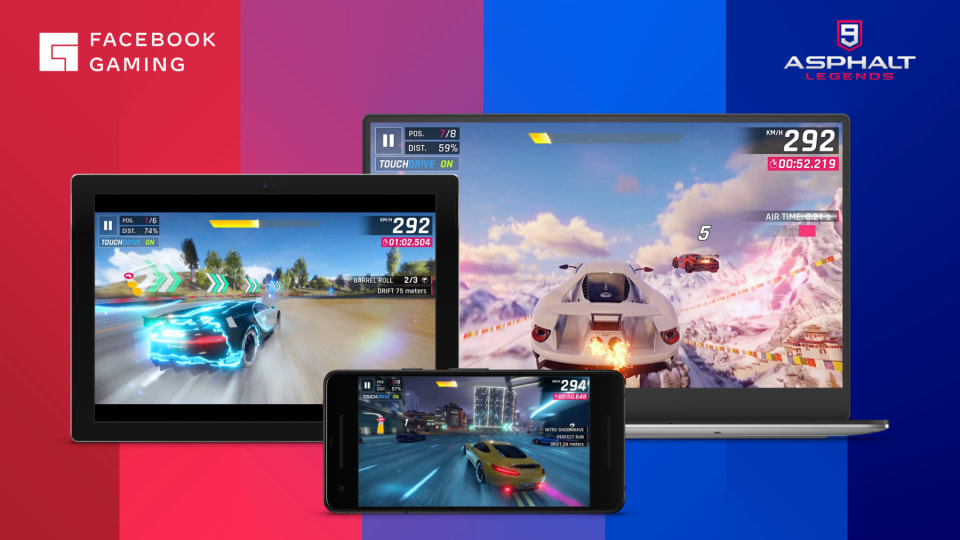 Facebook is the latest Silicon Valley juggernaut to jump into video game streaming. Not the kind you watch — the company already has a Twitch and YouTube Gaming competitor — but the sort you can play over an internet connection. Facebook isn’t targeting Stadia (Google), xCloud (Microsoft), Luna (Amazon) or GeForce Now (NVIDIA). Not at first, anyway. Instead of console and PC titles, the company is offering smaller free-to-play games. These include Asphalt 9: Legends, PGA TOUR Golf Shootout, Solitaire: Arthur’s Tale and Mobile Legends: Adventure, an ‘idle’ RPG that progresses even when you’re not actively playing. More games will be added over time, starting with Red Bull’s Dirt Bike Unchained “in the coming weeks.”

You’ll find these titles in the Gaming section of Facebook. (That’s the one that also contains its Twitch rival.) The company has emphasized that it’s not launching a standalone service and, because it’s part of the standard Facebook service, will be completely free to access. Unless you want to spend money inside the individual games, of course.

In addition, Facebook will be introducing “cloud playable ads” in the News Feed. These tiny demos will target people who rarely open the Gaming tab, or have forgotten that Facebook also offers playable games. Facebook says the ads will draw from a game’s native code and therefore be simple for developers to tweak.

Cloud gaming will be limited to two platforms: Android and the web. Apple originally barred game streaming services on iOS, much to the industry’s annoyance. The company changed its App Store Review Guidelines last month, however, allowing streamable games — provided every title is submitted separately for review — and “catalog” apps that help players find them. For now, Facebook’s approach doesn’t seem to be compatible with these guidelines. “Even with Apple’s new cloud games policy, we don’t know if launching on the App Store is a viable path,” Jason Rubin, VP of Play at Facebook explained in a blog post. The company might use the browser as a workaround, but there’s no word on when or how that might happen.

The service will eventually come to the dedicated Facebook Gaming app on Android. While the company is focused on mobile hardware and the web, it hasn’t ruled out supporting TVs someday. “I would love to be on TVs at some point,” Rubin told Engadget. “I think that would-be a great way to play these games. But there’s a big controller issue for us because we’re not giving you a subscription and sending you a controller as a loss-leader to earn back over time. Keyboard and touch input works for us, but the controller input for some of these [other] devices is something we have to overcome. We have some ideas, but it’ll take us some time to get there.”

Facebook’s moving into video game streaming isn’t a huge surprise. The company acquired PlayGiga, a startup that ran a cloud gaming service in Europe and select parts of the Middle East, last December. Facebook has also confirmed that it’s working with Microsoft on xCloud integration. The service announced today is based on the PlayGiga acquisition, however, and currently has nothing to do with Xbox.

Facebook’s version of cloud gaming doesn’t require an interface quite like xCloud or Stadia. Still, the company has been forced to build some of the basics. Users can have a Player Name, for instance, that is separate from their real name. They can also choose an avatar that will replace their profile picture in select games. Facebook is also offering a degree of cross-play support. If a developer uses Facebook Login, it’s possible for players to take their in-game progression and purchases between different versions. That’s critical given the types of games that Facebook is courting for its cloud gaming service. If you’ve already dumped 100 hours into Asphalt 9, or spent a bunch to get ahead, you probably don’t want to start over with a fresh save file.

Facebook isn’t giving up on regular social games, either. According to Rubin, 30 million people still log in every month and play the kind of titles that were originally built on Flash. (Developers have stopped updating many of these games, however, and some are being shuttered due to Flash’s abandonment later this year.) In addition, Facebook still has Instant Games, a series of quick-to-boot titles based on HTML 5. They used to be playable inside Messenger but are now limited to the Gaming tab. While shallow, these games have more than 300 million monthly active users, Rubin told Engadget. Unsurprisingly, Facebook doesn’t want to give up that kind of activity.

Instant games and streamable titles will coexist in the Gaming tab. Facebook won’t say which is which, either. You’ll simply click on a game and, if all goes to plan, load in instantly,

And that’s where the company differentiates from Google, Microsoft, Amazon and NVIDIA. The social media giant doesn’t want to bring attention to the technology underpinning the service. It doesn’t believe that players care how their game is delivered to them, provided it’s convenient and performs well. The latter is why the company is starting with smaller free-to-play titles. They’re not graphically intensive and, therefore, don’t require 4K or even 1080p resolution to appreciate. As a consequence, Facebook games shouldn’t require the same download speeds as a service like Stadia or NVIDIA’s GeForce Now, which are trying to match or surpass the experience offered by high-end PCs.

That doesn’t mean the company won’t offer more sophisticated games down the line. While streaming Asphalt 9: Legends, Rubin told Engadget: “Just to be clear, this could be a PC game as well. It could be the latest [and] greatest game on PC as well. And we will be shipping PC games. So we’re not only shipping mobile games, we're shipping both.”

Facebook’s opening gambit does have a downside, though. The types of games it’s offering — free-to-play mobile titles — aren’t the sort that Facebook Gaming streamers typically play. Until now, that disparity hasn’t really mattered. Facebook has embraced its casual gaming heritage while simultaneously pushing for a modern streaming experience akin to Twitch and YouTube. Google and Amazon, however, are thinking about the future crossover between games streaming and streamable games. Select Stadia games support Crowd Choice, for instance, which allows viewers to make choices on the streamer’s behalf. Google is also working on Crowd Play, a feature that lets YouTube viewers instantly jump into a streamer’s multiplayer session.

For now, Facebook can’t compete in this arena. Not until it supports the kind of games that big-name streamers such as Cory ‘KingGothalion’ Michael want to play. The company doesn’t seem fazed by this, though. That’s probably because its service is part of an already free and massively-popular social network. It doesn’t have to justify itself as a standalone business or continuously sell people on the value of a subscription. For Facebook, it’s just another small mechanism to keep users on the platform.

The company also believes that it can offer something different to Stadia, Luna and the rest. Games that were designed from the outset to take advantage of Facebook’s tremendous popularity, rather than the streamer scene on YouTube and Twitch. “A year or two from now, I believe you will see games that are specially tailored for a cloud-playable system that can take advantage of the social graph that Facebook can offer,” Rubin explained. "It will be a totally new type of game that I think will be incredibly powerful and move consumers forward.”

If you’re reading this and thinking ‘wait a second, I’ve been streaming these games on Facebook for a while now,’ then congratulations: you were one of Facebook's 200,000 weekly beta testers. Today is the official launch, though access is still limited to certain parts of the US. Streamable games will roll out first in California, Texas and Northeast and Mid-Atlantic states including Massachusetts, New York, New Jersey, Connecticut, Rhode Island, Delaware, Pennsylvania, Maryland, Washington DC, Virginia and West Virginia. The service will then be expanded “in the coming months,” according to Rubin.

In this article: facebook, facebook gaming, streaming, game streaming, news, gaming
All products recommended by Engadget are selected by our editorial team, independent of our parent company. Some of our stories include affiliate links. If you buy something through one of these links, we may earn an affiliate commission.