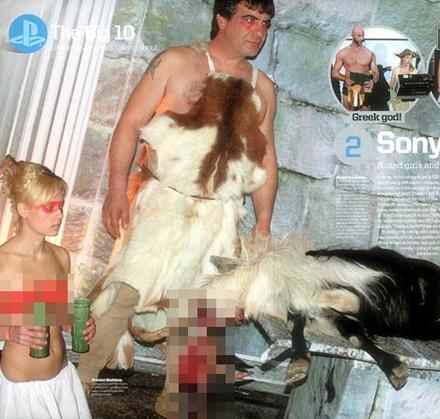 Looking back at the decapitated goat scandal that was Sony's press event for God of War II, which hit British tabloids and gaming news last month, the freshly slaughtered skin may have been the least offensive part.

If you frequented any gaming sites in the last few weeks, chances are you saw more pixilated pictures of flesh than you would have in a commercial for Girls Gone Wild. Unfortunately, not all the skin was of the girl variety – most of the pixilated flesh belonged to a freshly slaughtered goat that made an appearance at an event held in Greece to promote the recent launch of the game God of War II.

Among the festivities back in March, guests were challenged invited to win a PS3 by reaching into what looked like the most pathetic pit of snakes and eat a traditional Greek dish fashioned after goat intestines while topless women paraded around the joint. The goat had been purchased from a butcher prior to the event and though a spokesperson claimed the goat had not been slaughtered for the event, many were left skeptical considering goats aren't typically decapitated in such a manner. A video of the event surfaced, complete with commentary and cliché flame graphics.

The event seemed all in Fear Factor-style fun until a few shutters snapped and a picture was published in the Official Playstation Magazine (OPM), showing the goat, gore, and topless girl to top it off. A month after the event took place, a British tabloid, Mail on Sunday, broke the "Sony slaughter" news in all-caps, as only a tabloid can. Reportedly, Sony recalled 80,000 copies of the OPM that were headed to newsstands. Unfortunately, the pre-pixilated OPM had already been mailed out to subscribers.

Admittedly, the contributor of the article that appeared in OPM was not in attendance of the event and used an invite with "exaggerated" explanations of the gathering to write from literally. A spokesperson for the event claimed "this is not a true representation of the event, but nevertheless we realize the imagery and the inaccurate description of the event would cause offense and have thus taken action to stop it from circulating." The spokesperson went on to explain Sony is conducting an internal inquiry to learn from the event and ensure it doesn't happen again. While results of the internal inquiry have yet to surface, don't be surprised if the press event for God of War III features a petting zoo.

As the news spread, people looked to PETA for their reaction, thinking surely they'd cook Sony's proverbial goose. Surprisingly, PETA's reaction was "meh" at most, expressing their disappointment in Sony but pointing to the public as being self-governing on finding the picture offensive. If anything, PETA proved their "console-cred" on their blog, stating that they usually side with gamers against anti-videogame mogul Jack Thompson, who most recently condemned Wendy's for releasing Nintendo Wii toys.

To many, the most offensive part of the God of War II debacle was Sony's lame idea that boobs and gore at a party equal excitement, a concept that should have been recalled before its gory birth. While Sony has to explain its poor decision, PETA ends up the intelligent one for not lumping all gamers into one category. In an industry where salaciousness sells, a company has to make more than a half-assed attempt at Fear Factor if it wants to take its brand to decapitated goat shock standards.

Ariel Waldman is a Digital Insights Analyst for applied technologies at VML, an interactive agency. Her blog can be read at http://shakewellbeforeuse.com. Views expressed in Adgadget are her own.
In this article: decapitated, features, goat, god of war 2, god of war II, GodOfWar2, GodOfWarIi, jack thompson, JackThompson, official playstation magazine, OfficialPlaystationMagazine, peta, playstation, playstation 2, playstation 3, Playstation2, Playstation3, ps2, ps3, sony, wendy's
All products recommended by Engadget are selected by our editorial team, independent of our parent company. Some of our stories include affiliate links. If you buy something through one of these links, we may earn an affiliate commission.
Share
Tweet
Share