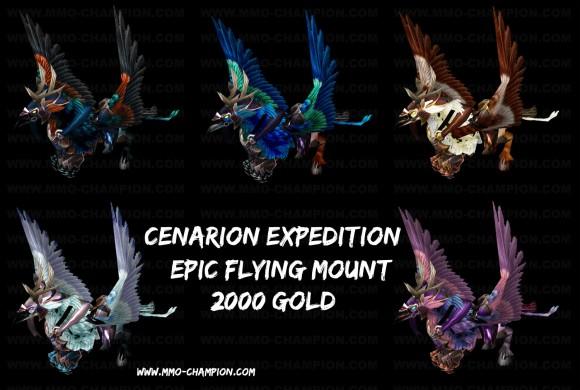 One of the things I never forgot in the run-up to patch 2.3 was seeing the photo above from MMO Champion. This was before the Cenarion War Hippogryph went live, and it was the faction's new (albeit expensive) reward for reaching exalted. Boubouille, as so often happens, datamined a bit more than what Blizzard actually permitted to go live, and the skin at the top left was what wound up being the Cenarion Expedition's flying mount. Sprinting for the CE quartermaster when the patch hit and discovering that that was the only model available (and that it couldn't walk) was a bit of a let-down, to the point where I decided to wait on buying the mount in the forlorn hopes that the other mount colors and animations would go live. Quoth the female Tauren, moo hoo hoo.

Since then it's become apparent that the hippogryph at top right became the Argent Hippogryph (score!) and the one at bottom left is now the Silver Covenant Hippogryph. That some of the Tournament daily quests award Silver Covenant/Sunreaver reputation makes me suspicious that the hippogryph and Sunreaver dragonhawk are eventually going to be rep mounts. That still leaves two hippogryph skins "left over," and you've got wonder if they're going into the game -- and if so, in what capacity. EIther way, there aren't words to describe my happiness at not being consigned to the ugliness of a wyvern (the airborne version of Tauren cat form) forever. I'll grant that my main is a Druid so I had a ready escape anyway (and I thank thee daily, Blizzard, for thy boon of total win in the guise of swift flight form), but sometimes a girl likes options.
In this article: cenarion-expedition, dragonhawk, dragonhawk-mount, dragonhawks, flying-mount, flying-mounts, hippogryph, hippogryph-mount, i-hate-tauren-cat-form, mount, mounts, silver-covenant, sunreavers, wyvern
All products recommended by Engadget are selected by our editorial team, independent of our parent company. Some of our stories include affiliate links. If you buy something through one of these links, we may earn an affiliate commission.
Share
Tweet
Share