HTC Sensation XE with Beats Audio review
Qualcomm's 1.5GHz dual-core MSM8660 destroys the competition in majestic benchmark run
HTC to buy a chunk of Beats Electronics, keep Dr. Dre in a lab with a pen and a pad
The HTC Sensation XL has landed, leaving a sizable footprint behind. While it picks up the naming convention from HTC's previously dual-core flagship series and some Beats audio accreditation on the way, it looks pretty damn familiar to another member of the family. Yes, the family's Windows Phone flagship, the Titan certainly tickled our fancy -- no other phone had landed on that nascent OS with such a screen. But the Sensation XL faces phones both bigger (and only slightly smaller) in the increasingly crowded world of Android. At around $723 (£450), is the XL's single-core processor enough? Is that glossy WVGA screen still sharp enough at this size? How does this one compare to previous Sensations, and perhaps more importantly, Samsung's even bigger not-so-heavyweight? Keep reading after the break to find out. %Gallery-138799%
HTC
0
SCORE
Engadget
N/A
Critics - Not yet scored
N/A
Users
4 reviews
78 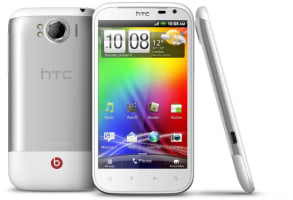 The Sensation XL has some sizable heft to it, making it yet another handset pushing the boundaries of how much touchscreen we can fit into our collective pockets.

The HTC Sensation XL bears a more than passing resemblance to its Windows Phone cousin, the Titan. In fact, most of the technical specifications are identical, with matching 4.7-inch screens, identical camera specifications and and generally the same look and feel. There are some differences; the XL is another Beats-branded handset, and arrives with a pair of Dre-endorsed in-ear buds, and there are subtle differences to the shaping of the handset. The Sensation XL has some sizable heft to it, making it yet another handset pushing the boundaries of how much touchscreen we can fit into our collective pockets. Hardware-wise, much of what we've already said about the Titan holds true here. In fact, it measures up identically to its Windows Phone doppelganger, squeezing all that screen and a 1,600mAh battery to within 10mm (0.39 inches), making it thinner than its smaller-screened Sensation sisters. Those XL credentials also betray its weight; at 5.73 ounces (162g) it's lighter than both the original and XE versions. The build quality is another success story from HTC and the single-piece backing feels solid in the hand. While the Titan's cover wraps around the whole screen, the Android version doesn't extend over the front lip. The Sensation XL's upper bezel is thinner than the Titan, but this is simply a trade-off for a bigger chin at the bottom. The phone's edges are also more curved, and we found the back cover slightly more tricky to wrench off, though it's certainly easier than a certain similarly styled HTC tablet.

The XL arrives in the same white-metallic stylings seen on the HTC Flyer and Radar, with a dash of Beats-inspired red accents livening up the back. Unlike the HTC Sensation XE or HTC's forthcoming Rezound, you won't find any such touches around the front of the phone, which is a bit of a shame, as we found that splash of scarlet helped add some visual spice to the otherwise slightly muted design. You will find, however, HTC's stock Android button quartet: Home, menu, back and search. They're lit up by a gentle glow, slightly more subtle than other phones from its back catalog, though we'd welcome a return of those prismatic, rotating beauties found on the Incredible S. Above the WVGA screen, you'll find the ear piece, proximity sensor, ambient light sensor and a 1.3 megapixel front-facing camera.

You won't find the curved Gorilla Glass display seen on other Sensations -- the screen looks to be identical to the Super LCD we already stroked on the HTC Titan; that 4.7-inch WVGA screen remains the same, as does its color reproduction and viewing angles. Already the software differences do come into play, if only due to involuntary comparisons with other Android phones. We've already seen qHD and even higher resolutions running Google's OS. Does it matter? Well, it depends. This, like the Titan is a lovely screen, despite the mid-table dots-per-inch ranking. Colors aren't washed-out, and this model of Super LCD beats out the smaller -- but sharper -- Sensation screen with impressive viewing angles and color production. No, it's not Super AMOLED, but that doesn't mean it can't impress. In daily use, in this size, it's a revelation to use -- like the Galaxy Note, we found ourselves drawing the phone away from our eyes, as we could see everything we needed to from a distance -- you can glance at the phone, and read any information you've setup on the customizable lock-screen.


Sound-wise, our review model arrived with another pair of urBeats in-ear headphones, with several pairs of buds, hoping to fit all sorts of ears. As we investigated extensively in our Sensation XE review, the built-in Beats audio remains mostly bluster, the headphones themselves remain stylish and of far higher quality than your typical in-the-box in-ear offerings, which sound cheap and weedy in comparison.

However, despite the push to sell the XL as the go-to music and entertainment smartphone, it's utterly hobbled by non-expandable memory. This would've been fine if built-in storage amounted to top-end iPhone levels, but the built-in storage amounts to just under 13GB. Anyone with an extensive range of music tastes will be forced to pick and choose what they sync with the phone -- or pick an alternative (presumably cloud-based) option like Spotify and miss out on the built-in Beats equalizer. A major problem for this audio-branded phone.

We feel like we're retreading old ground again, but (again) the Sensation XL has the same camera as the Titan. In that respect, it's another zippy eight megapixel number: responsive, but also missing the kind of two-stage trigger found on its WinPho alter ego. Nonetheless, the f/2.2 lens does its job managing the light admirably, with a particularly strong macro performance. Compression on pictures was similar to the Titan; expect a reduction on full-sized eight megapixel stills to between 1 and 1.5MB.%Gallery-138894%
Video performance is hampered by some pretty poor light balance, often switching between extremes. We appreciated the ability to adjust the auto-focus during filming by touching the area we wanted in focus, but this invariably adds a moment of unfocused blur. Like the HTC Rhyme, there's also an extra (lower resolution) slow-motion capture mode. It's still worth noting that other similarly priced Android phones may be capable of 1080p recording but often don't have the bit-rate chops to back it up. With adequate lighting, the camera is still capable of capturing satisfactory footage, but audio quality leaves a lot to be desired.


The Sensation XL packs a Qualcomm MSM8255 1.5GHz processor, so we weren't expecting a new king of performance. Aside from the comparatively low Nenamark score, the latest addition to the Sensation stable fares remarkably well, with an impressively low Sunspider score proving its web browsing chops.


When we pushed the Sensation XL's 1,600mAh battery to its limits in our video rundown test (movie looping, 3G on, WiFi enabled, but not connected), it managed just under five hours. If you stack this up against its progenitor, a dual-core Sensation XE with a slightly larger battery that managed between five and six hours of rundown, you begin to see the phone's battery takes some blows from that big-screen. In day-to-day use, we found Sensation XL's lifespan would understandably vary widely on what you used it for -- the more time spent enjoying that SuperLCD screen, the less you'll have to keep the phone otherwise ticking over. When it came to holding this impressively molded lump of smartphone to our face for calls, we found reception was typically good, and it's worth noting that the unibody back acts as a contact for the aerial innards. Also, the YourBeats headphones doubled as hands-free set quite admirably, and are comfortable enough to manage those extended conversations.

Yes, HTC's Sense UI is back, and it's big. The Sensation XL is the latest phone to get version Sense 3.5, introduced on the "lady-centric" HTC Rhyme. The lock screen shortcuts remain its most redeeming feature, but it looks increasingly likely to face obscurity once Google gives us a bite of the Ice Cream Sandwich -- planned to arrive on the XL in early 2012. Anyone who's used a different Android phone will find it takes some time to get used to its quirks. While some may bemoan the extra processing juice (and presumably battery power) to keep the glossy weather features and 3D carousel animations going, we think they do add to the experience of the phone. Now if only HTC would give us the option to turn all these bells and whistles off, we'd take less of an issue with it, especially with single-core phones that may need to think a fair bit more for these graphical pyrotechnics. Behind the layer of Sense is the reliable Gingerbread build of Google's OS, and functions superbly on the expansive screen. The likes of Google Maps and the built-in web browser make the most of the 4.7-inch Super LCD display, and it rarely chokes on content-dense sites.

HTC's stock keyboard takes up the majority of the screen, with its squareish buttons a very viable option for anyone who's found touchscreen keyboards before now simply too fiddly. There's the typical predictive function here, too, but what the Sensation XL has over the Titan is a choice of extra keyboards, including Engadget favorites like SwiftKey and Swype, though the stock Android version isn't an option here.

Sacrifices have been made here, and ones which put it behind the smaller-screened Sensation and XE when it comes to processing speed and battery life.

The Android Gingerbread OS remains the major difference between this and its Windows Phone cousin. While the Titan could arguably lay claim to being the best device available on the OS at this point, the XL has tougher competition -- even within HTC's own family. Sacrifices have been made here, and ones which put it behind the smaller-screened Sensation and XE when it comes to processing speed and battery life. We've said our piece about Beats Audio already, but it becomes even more defunct when storage space for the stock music app is at a premium. Having said that, like our experience with Samsung's Galaxy Note, web browsing, media consumption and other full-screen tasks are a joy with the extra canvas on offer here. But as we concluded with the Galaxy Note, some may still find the Sensation XL's 4.7-inch screen one size too big.
All products recommended by Engadget are selected by our editorial team, independent of our parent company. Some of our stories include affiliate links. If you buy something through one of these links, we may earn an affiliate commission.