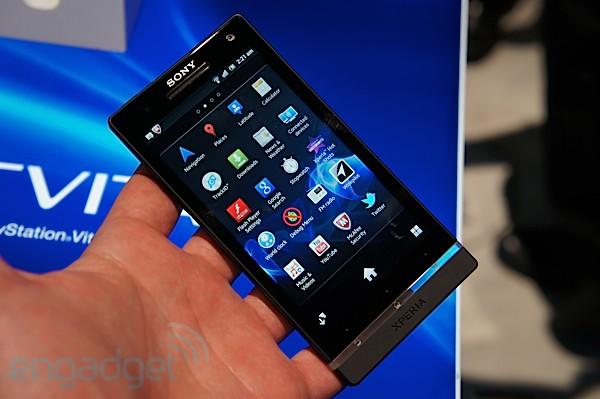 We had the feeling that the Sony Xperia S might rear its lovely little head at tonight's press conference in the Las Vegas Convention Center -- and indeed this pretty little slab was announced amongst the deluge of products and superstar cameos.

The Sony Xperia S is a smartphone with a bit of an identity crisis, which is to say that there were two versions of the same handset on the showroom floor -- one with the now oddly outdated Sony Ericsson branding along its top bezel, just above the speaker grill and another which simply reads "Sony" in big, block letters. And really, the new naming convention doesn't seem to out of place on the Android 2.3 handset -- it's got a bit more room to breathe up there. And besides, the gorgeous S looks right at home alongside Sony's other glossy hardware.

The Xperia's bright 4.3-inch display monopolizes the upper 2/3 of the handset. Just below this, you'll find three white dots. These line up with the home, menu and back button. Icons for each are embedded in a a sliver of thick glass casing. Upon seeing the handset, we found ourselves attempting to touch the icons themselves -- it turns out it's actually the aforementioned dots that activate the functionality. We appreciate the clear focus on aesthetics here, but the whole thing is a bit counterproductive.

Update: In fact, that see-through strip acts as the antenna, which you can just about see if you get up-close and personal, with micro-fine dots riddling the strip.

The handset itself has a nice feel, with a concave back, which makes the handset a bit thick than the segments of the Android population attempting to win the title of the "world's thinnest." But hey, you've got to have some place to shove that 1.5GHz CPU and 1GB of RAM, right? And it's good they did, this handset is quite zippy.

Joseph Volpe and Mat Smith contributed to this report. In this article: ces, ces 2012, Ces2012, hands-on, mobilepostcross, sony, video, xperia, xperia arc, xperia arc s, xperia s, XperiaArc, XperiaArcS, XperiaS
All products recommended by Engadget are selected by our editorial team, independent of our parent company. Some of our stories include affiliate links. If you buy something through one of these links, we may earn an affiliate commission.
Share
Tweet
Share