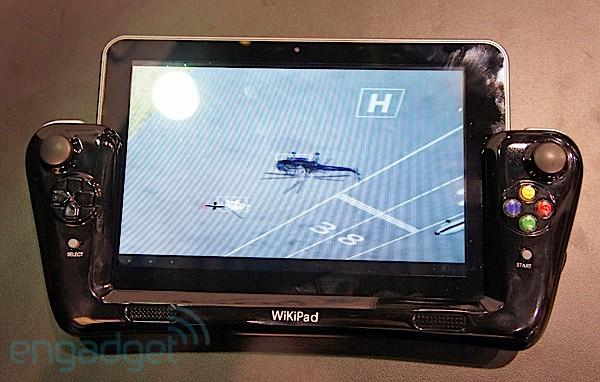 Wikipad's promise of a touchscreen, dual-analog gaming controls and glasses-free display meant we were itching to get our gaming fingers on it. Heck, on paper that's the illegitimate love child of the Vita and the 3DS. Fortunately, we managed to bump into the tablet on the CES show floor. It turns out the tablet is quite a svelte thing once you unshackle it from the game controls. With a soft-touch backing, the eight-inch tablet hits the sweet spot size-wise, with a glasses-free 3D display that was able to show off the entirety of Avatar. Otherwise, it's Ice Cream Sandwich as normal. We're going to shrug off the OS sluggishness here to prototype teething, but it's something that we hope disappears in the finished product.

Sadly, there's a bit of a major problem tackling a hands-on with this thing -- and it's not the Gamegear-trouncing size of the thing; the gaming controls weren't functioning with any games on the device we had. While the Sonic CD app icon on the Android desktop piqued our interest, it wasn't installed and we were then told that the controls weren't currently working with games. Menu navigation was possible, and the digital inputs were responsive, but a little shaky. The pair of analog sticks feel about right, though obviously we need to see some in-game responsiveness before we pass proper judgement. The device is set to launch during Spring, so hopefully they'll get the gaming side sorted soon. Expect a more in-depth hands-on when there's more to play around with.

21
In this article: 3D tablet, 3dTablet, CES, CES 2012, Ces2012, dual analog, DualAnalog, gaming tablet, GamingTablet, glasses-free 3D, Glasses-free3d, hands-on, prototype, wikitab
All products recommended by Engadget are selected by our editorial team, independent of our parent company. Some of our stories include affiliate links. If you buy something through one of these links, we may earn an affiliate commission.
Share
Tweet
Share