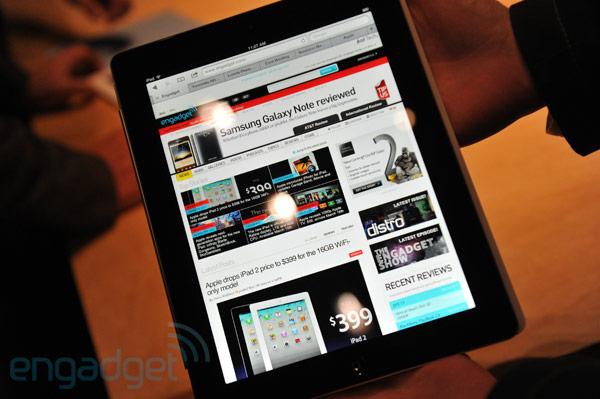 Here she is -- the iPad HD! Er, new iPad. Breaking away from the numerical tracking system used before (and still used in the iPhone range), Apple has decided to highlight the most major change in its newest slate by simply dubbing it "new." By and large, the new guy is the same as the old guy (Home button included), but with a few nice amenities that could very well convince OG iPad owners to upgrade. Upon touching the HD variant, it's not the overall form factor that grabs us -- it's the screen. Given that we're unashamed Pixel Density Enthusiasts 'round these parts, seeing a 2,048 x 1,536 resolution display in the same area as the prior 'Pads is stunning. Nearly two months ago to the day, ASUS wowed our entire CES trailer with a reported 1,920 x 1,200 display on the TF700T; this, however, is something that really needs to be ogled to truly appreciate. In fact, the first viewing conjured up familiar feelings -- ones that came to light when placing the iPhone 4 beside the iPhone 3G for the first time.

Unsurprisingly, Apple has managed to produce something that's truly beautiful to look at, and while we've yet to see the full potential of having this many pixels on a 9.7-inch slate, we're guessing a cadre of game developers are already hard at work in order to remedy that. Beyond being dazzling from a density standpoint, colors are sharp and accurate, and viewing angles are predictably ridiculous; even taking a peek from an extreme side angle gives way to a fairly solid image with next to no washout.


For more coverage of Apple's iPad event, visit our hub!

Other differences? Well, the rear camera has been greatly enhanced; not too shocking given that a) the iPhone 4S is sporting bolstered optics and b) FaceTime chats just won't look as sexy without a higher-res sensor to fill up that higher-res display. Unfortunately, the front-facing camera is the same, so those beaming their face from that one won't be doing so with any extra resolution. We weren't able to give FaceTime a run here in San Francisco, but you can bet we will in our upcoming review. As for Siri? Well, it's not here per se, but voice dictation is a nice compromise given that Siri isn't exactly tailor made for products that don't have an always-on connection. The A5X adds quad-core graphics power, and while zipping through home panes doesn't feel dramatically faster, the bulk of the added horsepower isn't truly appreciated until you fire up a forthcoming 3D title.

We can already hear the pundits cockily renaming this thing the iPad 2S, but as Apple's latest quarter has shown, people tend to spend money on even slight upgrades to existing hardware. Much like the first iPad, it's pretty tough to say what sort of market impact the new iPad will have without first waiting for developers. A few months down the road, we'll be able to more appropriately evaluate how devs are taking advantage of the massive uptick in pixels. In fact, we're hoping for an entirely new wave of apps that will be enabled by the ability to shove so much more content onto a single screen. That said, it'll be really interesting to see how new apps -- those designed specifically for the iPad's Retina Display -- scale down to the display seen on the iPad 1 and 2.

There's no doubt that this here tablet feels every bit like a $500 product, oozing quality from edge to edge and being as delightful as ever to use. Is it the second coming of the tablet? Of course not, but if we've learned anything from the iPhone 4S, it doesn't need to be. Apple just put an insane amount of screen real estate in the hands of crafty developers, and frankly, we can't wait to see what they cook up. Till our full review, have a look at the shots below!


Update: We just circled back with Apple and learned a few more nuggets. The new iPad is ever-so-slightly thicker than the iPad 2, but we're told that "most accessories" (including the Smart Cover) should work just fine. Moreover, the Voice Dictation feature here requires a web connection, which leaves us even more baffled at the omission of Siri. With Airplane mode toggled on, the microphone button on the keyboard simply vanishes. In practice, Dictation picked up our phrases perfectly, even in a crowded room that was simply buzzing from random chatter.

There's also a new ability to delete photos from Photo Stream with iOS 5.1 (a particularly pointed issue for some users), and the camera shutter button has been relocated to roughly halfway up the screen in both horizontal and vertical orientations -- it's a heck of a lot more useful there. Everything else, including the headphone jack, volume rocker, mic slit and Dock Connection, remain the same as the iPad 2. We poked around in the Settings menu, and didn't see an option to disable LTE on the Verizon slate that we had in front of us; you may remember the ability to disable 3G on prior models, but it doesn't seem that those having LTE issues will be able to force themselves down to a slower network -- at least not on the VZW edition.

The new iPhoto app is simply astounding. It's fast, it's elegant and infinitely useful. And the tweaks that you can apply to your photos are seriously impressive; gimmicky this is not. At $4.99, it's probably the best bargain you'll find on the App Store, particularly if you're a photo lover, and those that rely on iCloud will appreciate the ability to edit on one's iPad and have the revised version synced sans effort back into iPhoto or Aperture.

As for the new iWork apps? All of those will work on prior iPads, and even the new "trailer" feature in iMovie will be operational on the prior versions. We also confirmed that the new iPad has "the same CPU" as the iPad 2, but there's dedicated silicon for the camera module and a lot more horsepower on the graphics front.
In this article: a5, a5x, apple, apple ipad 3, apple ipad hd, AppleIpad3, AppleIpadHd, hands-on, ios, ipad, ipad 3, ipad hd, Ipad3, ipadevent2012, IpadHd, retina display, RetinaDisplay, slate, tablet, video
All products recommended by Engadget are selected by our editorial team, independent of our parent company. Some of our stories include affiliate links. If you buy something through one of these links, we may earn an affiliate commission.
Share
Tweet
Share